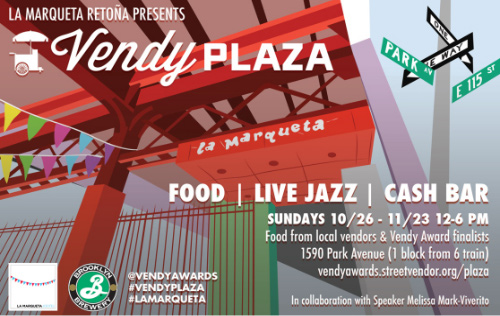 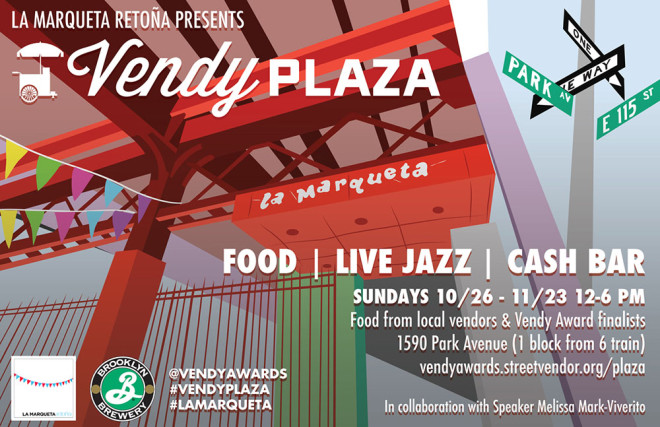 The Vendy Plaza will feature a rotating list of vendors, including:

La Marqueta Retoña is an initiative to revive the social and cultural elements of this historical site through the arts, music and community activities.  A series of events are scheduled to take place at the outdoor space known as “La Placita” as well as in the main indoor space of La Marqueta both located underneath the Park Avenue elevated train station between 115th and 116th Streets in El Barrio with aim to celebrate Latin culture, educate and instill a scence pride in the next generation of residence living in El Barrio.

The Vendys are a fundraiser organized by the Street Vendor Project, a membership-based non-profit organization that stands up for vendors’ rights. The Vendys are the first street food event and competition series in the USA, providing a forum for vendors to compete for the title of Best Street food.
Outside of New York, The Vendys partners with local organizations that support street vendors and/or sustainable food issues in each host city

No Food Stamps for the Unemployed? NYC’s...

How an Algorithm Kicks Small Businesses out...

October 10, 2018
Subscribe To Weekly NYC Food Policy Watch Newsletter
Subscribe to our weekly email newsletter today to receive updates on the latest news, reports and event information
We respect your privacy. Your information is safe and will never be shared.