A report from the Johns Hopkins Bloomberg School of Public Health

Adolescents who saw printed signs explaining the number of miles they would need to walk to burn off the calories in a sugary drink were more likely to leave the store with a lower calorie beverage, a healthier beverage or a smaller size beverage

And those healthier choices persisted weeks after the signs came down.

A report on the findings, published online Oct. 16 in the American Journal of Public Health, adds to the growing evidence suggesting that simply showing calorie counts on products and menus isn’t enough to break Americans from their bad eating habits. With calorie counts expected on menus in chain restaurants with more than 20 outlets by early next year the Affordable Care Act, the researchers say policymakers may need to rethink how that information is communicated.

“People don’t really understand what it means to say a typical soda has 250 calories,” says study leader Sara N. Bleich, PhD, an associate professor in the Department of Health Policy and Management at the Bloomberg School. “If you’re going to give people calorie information, there’s probably a better way to do it. What our research found is that when you explain calories in an easily understandable way such as how many miles of walking needed to burn them off, you can encourage behavior change.”

For six-week stretches between August 2012 and June 2013, Bleich and her colleagues installed signs in six corner stores in low-income, predominantly black Baltimore neighborhoods. The signs, four in all, presented a key fact about the number of calories in a 20 oz. bottle of soda, sports drink or fruit juice: that each bottle contained 250 calories, had 16 teaspoons of sugar, would take 50 minutes of running to work off those calories or would take 5 miles to walk the calories off. Researchers observed 3,098 drink purchases in the stores by black adolescents between the ages of 12 and 18 and interviewed 25 percent of them after leaving the store about whether they saw and understood the signs. Of the 35 percent of kids who said they saw the signs, 59 percent said they believed them and 40 percent said they changed their behavior as a result. 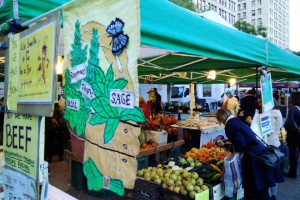