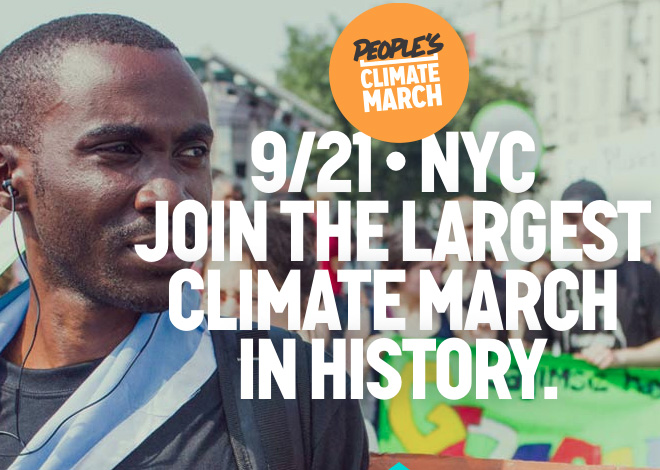 Therefore, the People’s Climate March on September 21 will be the largest climate march in history.  It is designed to coincide with the UN Climate Summit.

With our future on the line and the whole world watching, we’ll take a stand to bend the course of history. We’ll take to the streets to demand the world we know is within our reach: a world with an economy that works for people and the planet; a world safe from the ravages of climate change; a world with good jobs, clean air and water, and healthy communities.

To change everything, we need everyone on board.
Sunday, September 21 in New York City. Join us.

There are several different bodies that are convening to collaborate on the People’s Climate March, including local New York-area community groups, international NGO’s, grassroots networks, churches and faith organizations, and many more. You can see a list of participating organizations here.

The Food Justice contingent is assembling on Central Park West between 71st and 72nd Streets at 10:30 am and will enter the park at 77th or 81st Streets. There will be tens of thousands, maybe hundreds of thousands of people at the march so be sure to come early. The Food Justice Contigent is one of 4 contingents in the march with a sound permit and there will be a food justice rally! The speakers line up is forming but Vandana Shiva is confirmed. Local heroes are also speaking and there will be music, dance and fun. Please bring (light weight) pots and pans to be part of a percussion action in the tradition of housewives and chefs all over the world. Bring lots of water, hats and sun block. There will be plenty of food for sale a the end of the march. If people want to serve as volunteer staff for the contingent please tell them to come no later than 9:30 am to help us set up.
Note: no metal or wooden poles allowed, only cardboard poles are permitted (we’ll have lots of signs but you can create your favorites too).
Because this is a “movement of movements” moment, the People’s Climate March is being organized in a participatory, open-source model. This means that there isn’t a central “decision-making” body or single coalition. Rather, groups and individuals are collaborating with some basic shared agreements around respect, collaboration, trust, and many are using the Jemez Principles of Environmental Justice. This September is going to be a success because of the work we all do together – not because of any one person or organization. Take the initiative to organize your community, your school, your workplace, and your neighbors. Find out how you can help here, or find out how your organization can support the People’s Climate March here.

March 1, 2022
Subscribe To Weekly NYC Food Policy Watch Newsletter
Subscribe to our weekly email newsletter today to receive updates on the latest news, reports and event information
We respect your privacy. Your information is safe and will never be shared.