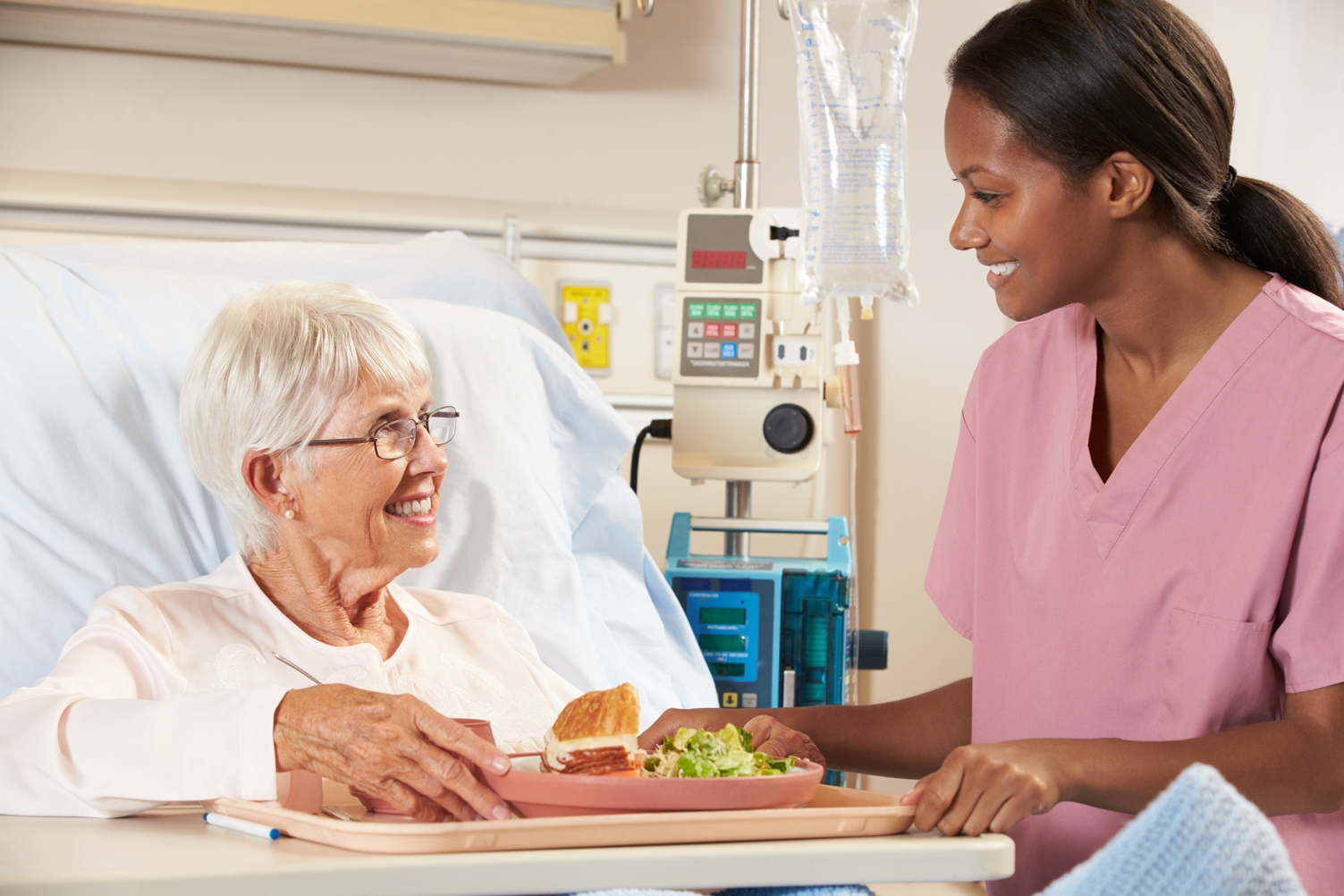 On average, doctors get less than 24 contact hours of nutrition training in all four years of medical school. In fact, one study found that only 30 percent of United States medical schools required even one course specifically about nutrition.

And it’s not just medical schools that neglect nutrition; hospitals often fail to consider it when designing their patient menus.

In 2005, the Physicians Committee for Responsible Medicine surveyed 40 hospitals and hospital systems around the United States, and found that less than one-third offered a daily salad bar or low-fat vegetarian entree. More than half of the dishes described as their “healthiest entree” actually derived one-third or more of their calories from fat. Additionally, about 17 percent of the surveyed hospitals hosted a fast food establishment on their premises.

Research shows that malnutrition is not uncommon among hospital patients. A recent study in the Journal of Clinical Nutrition found that patients who become more malnourished while in the hospital also have longer hospital stays, though the study did not determine that hospital food was the cause of increasing malnourishment.

With the increased public focus on the role diet plays in obesity, diabetes, and cardiovascular disease among others, New York City aims to make hospital food healthier through the the Healthy Hospital Food Initiative (HHFI).

In 2012, the New York City Department of Health announced that more than 30 public and private hospitals would be participating in the Healthy Hospital Food Initiative (HHFI), a program intended to improve the nutrition of food offered in hospitals by reducing fat and sodium, and increasing whole grains, fresh fruits, and fresh vegetables.

To participate in HHFI, NYC hospitals have to adopt the New York City Food Standards, issued by Mayor Bloomberg in 2008, mandating that all NYC agencies follow certain standards when purchasing, preparing, and serving food. This order applied to public hospitals, but private hospitals have been sluggish to join in.

Patient meals must include at least five servings of fruit and vegetables per day. Canned and frozen fruits and vegetables must have less than 290 mg of sodium per serving, and fruit canned in sweetened syrup is forbidden. Bread and pasta must be whole wheat and must have at least two grams of fiber per serving. Saturated fat can compose no more than ten percent of patients’ daily calories, and deep frying is forbidden.

The cafeteria standards require that leafy green salads, vinegar-based dressing, and at least four kinds of fruit always be available. At least 50 percent of sandwiches, salads and entrees  must be made with whole grains, contain less than 800 mg of sodium, and be no more than 500 calories. Deep frying is forbidden and all items must contain zero trans fat.

The standards recommend—but do not require—hospitals consider sustainability, with an emphasis on local sourcing and low pesticide use, when making food purchases.

Perhaps unsurprisingly, researchers found that before hospitals started the HHFI, none of their patient meal menus met the NYC food standards. Most patient meals had too much saturated fat, too much sodium, and too little fiber.

A study published in the Journal of the Academy of Nutrition and Dietetics found that HHFI in New York City significantly improved the nutritional quality of patient meals in NYC hospitals.

In New York City, it remains to be seen whether serving healthier food in hospitals shortens the average stay, though other research has shown there is a correlation between increasing malnourishment and longer hospital stays. But an obvious immediate hope is the education of patients – giving them an idea of what they should eat upon their release.

Dr. Robert Graham, founder of FRESH MED NYC, an integrative health practice that emphasizes nutrition along with conventional medicine, has a positive outlook on the HHFI. Graham said, “During the past four years of the Healthy Hospital Food Initiative, we can applaud some hospitals for thinking differently about the food they offer patients and visitors. Hospitals are beginning to appreciate the old adage  of ‘food is medicine.’”

Memorial Sloan Kettering Cancer Center is one private hospital that has taken the program to heart, converting all aspects of its food and beverage program. In addition to complying with all the standards, Memorial has started a Meatless Mondays initiative, with multiple vegetarian dishes on the cafeteria menu every Monday. Memorial also purchases locally grown produce and serves sushi from fisheries that they claim “follow sustainable practices.”

Queens Hospital Center, which is now a part of New York Presbyterian, is offering multiple vegetarian and vegan dishes every weekday.

Despite clear successes, HHFI has far from solved the problem. Out of 38 participating hospitals, only 11—two public and nine private—have fully converted their food and snack options to meet HHFI standards. This is partially because NYC public hospitals are only legally obligated to comply with the food standards in three of the four areas; the cafeteria portion is voluntary.

Furthermore, this still leaves 40 percent of NYC hospitals that have not yet chosen to participate, though some are making strides without officially participating in HHFI. Lenox Hill hospital, which is not listed as a partner, has been incorporating produce from its rooftop garden into its meals.

To add further pessimism to an already half empty problem, not only are participating hospitals lagging behind in complying with the standards, there is also the question of whether the food standards are sufficient to promote a healthy diet. For now, the hope is for more participation among NYC hospitals, and only time and further research will tell what the lasting impact of the Healthy Hospital Food Initiative will be.

After Tobacco, Should CVS Next Take Sugary...

February 12, 2014
Subscribe To Weekly NYC Food Policy Watch Newsletter
Subscribe to our weekly email newsletter today to receive updates on the latest news, reports and event information
We respect your privacy. Your information is safe and will never be shared.