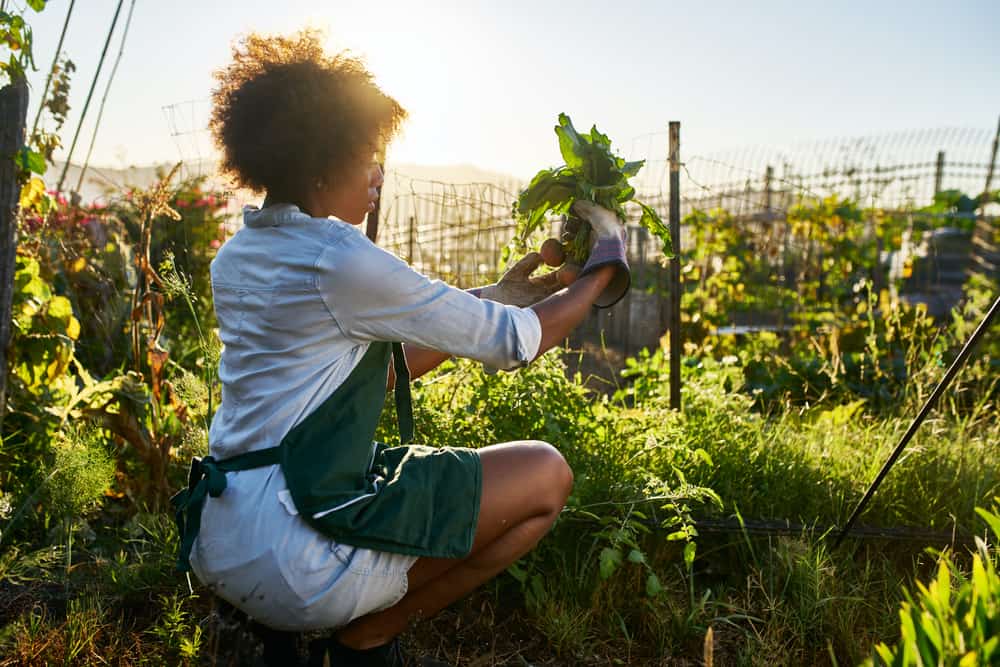 In celebration of Black History Month we are highlighting ten black individuals from across the country who are crafting powerful narratives around food and sustainability and fighting for community-based approaches to food policy that connect race and culture to our food system. Although communities of color have long played a critical role in shaping the American foodscape, their contributions have historically gone unrecognized in mainstream food culture and policy. These black chefs, farmers, educators, and community activists offer an array of books, documentaries, resources, and organizations to engage with and learn from during Black History Month and in the months to come.

About: Bryant Terry is a James Beard Award-winning chef, educator, and cookbook author. A graduate of the chef’s training program at the Natural Gourmet Institute for Health and Culinary Arts in New York City, Terry is a plant-based chef and the co-founder of b-healthy! (Build Healthy Eating And Lifestyles To Help Youth), which was a five-year educational initiative that worked with youth to build awareness of issues related to food-system justice. He is the author of five cookbooks, including the acclaimed Afro Vegan, which was nominated for an NAACP award for outstanding literary work. His mouthwatering recipes include creative vegan plays on afro-Caribbean and soul food classics, bringing plants to the forefront and highlighting healthy and sustainable ways to have fun in the kitchen and engage with local food systems. Since 2015, Terry has served as the Chef-in-Residence at the Museum of the African Diaspora (MoAD) in San Francisco, where he creates public events and programming around the intersection of the African Diaspora with food, culture, art, and beyond.

Read His Books: In addition to Afro-Vegan, Terry is the author of The Inspired Vegan, Vegan Soul Kitchen, Grub: Ideas for an Urban Organic Kitchen (with Anna Lappé), and Vegetable Kingdom.

Learn More About Bryant: Profile in BerkeleySide, interview with Kitchn.

About: Jamila Norman, also known as “Farmer J,” is an urban farmer and food and wellness activist working to reconnect urbanites to the food system and promote wellness within the black community. In 2010, Norman launched Patchwork City Farms, a 1.2 acre independently owned organic urban farm in Atlanta, Georgia, where she is the sole farmer. She now offers her produce to local Atlanta residents through farmers’ markets and CSAs (Community Supported Agriculture) sites. She is also the co-founder of EAT MOVE BeWELL, an initiative whose goal is to promote wellness through food education and advocacy in communities of color. Norman is a founding member of the South West Atlanta Growers Cooperative (SWAG Coop), a cooperative focused on supporting black urban farmers in Atlanta, and a board member of Georgia Organics, an organization working to connect Georgian communities with local, organic food. Through her work, Norman continues to advocate for community wellness, organic farming, and access to healthy food for urban communities.

About: Karen Washington is a farmer, activist and educator long committed to rebuilding New York City’s food system and promoting access to local food through urban farming. Washington began her journey as an activist in 1985, and has since worked with a wide variety of food and community-based organizations including, La Familia Verde Community Garden Coalition, the New York City Community Garden Coalition, and Just Food. She is on the boards of the New York Botanical Garden, Farm School NYC, Why Hunger, Soul Fire Farms, and Greenworker Cooperative. In addition, she helped to launch City Farms Market and co-founded Black Urban Growers (BUGS), a volunteer organization aimed at connecting and supporting urban and rural growers. In 2012, Ebony magazine voted Washington one of the 100 most influential African-Americans in the country, and in 2014, she received the James Beard Leadership Award. She is currently the co-owner of Rise & Root Farm, an organic farm in Chester, NY, and a teacher at Farm School NYC.

About: Leah Penniman is a farmer, activist, and educator working to reconnect BIPOC (black, indigenous and people of color) individuals to the land, to fight injustice and racism in the food system, and to build community control over food systems. In 2010, Penniman and her husband, Jonah Vitale-Wolf, founded Soul Fire Farm on 80 acres of land in Grafton, NY. Soul Fire Farm is an afro-indigenous community farm and educational center aimed at uprooting racism within the food system and building community food sovereignty. The farm provides food to the surrounding community as a way to end food apartheid (Penniman’s preferred term for food deserts) in the local area. At the farm, black and brown individuals can receive training in sustainable-agriculture and environmental-justice and participate in spiritual activism and trauma-healing workshops. Soul Fire Farm has been a training ground for many young farmers and food activists, and has played a vital role in developing resources for combating racism and inequality in the food system, and in reconnecting agriculture to afro-indigenous and regenerative practices. In 2019, Penniman won the James Beard Foundation Leadership Award for her work at Soul Fire Farm.

Read Her Book: Leah Penniman’s 2018 book Farming While Black: Soul Fire Farm’s Practical Guide to Liberation on the Land, is a guide to sustainable, equitable, and culturally-connected farming and a celebration of African and indigenous growing and healing practices.

Learn More about Leah: Profile in Vogue, profile in Today, interview with the Food Revolution Network.

About: Linda Goode Bryant is a documentary filmmaker and activist who has been working to highlight and support black and brown communities through her films and nonprofit work since the 1970s. She began her career producing and directing a number of documentaries and opening the famed Just Above Midtown (JAM), a now-closed community space for artists in New York City. While working on a documentary focused on the 2008 Global Food Crisis, Bryant decided to broaden her focus to include urban farming and community food advocacy, In 2008, Bryant founded Project EATS, a neighborhood-based initiative that operates a network of urban gardens in New York City and provides resources  and educational opportunities as well as to connect local communities to fresh produce and knowledge about sustainable and equitable food production. The organization uses art, urban agriculture, and economic opportunities to inspire community-based work and support local economies in addition to providing after-school programming for local youth.

Watch her films: Linda has produced and directed several documentary films including, Flag Wars (2003) and Time Piece (2006), and collaborated on Hurricane Teens (1998) and Can You See Me Now? (2006).

About: Olivia Watkins is a farmer and social entrepreneur with a background in regenerative farming. She began her work in regenerative farming at Kahumana Organic Farms in Hawai’i and Soul Fire Farm in New York, before returning to her home state of North Carolina to tend to land in Wake County that has been in her family for 130 years. On this land, Watkins began Oliver’s Agroforest (named after her grandfather), where she now grows and sells mushrooms. In 2017, she joined with Melanie Allen, a fellow young farmer and environmentalist, to launch the Black Farmer Fund, which invests in black food system entrepreneurs in New York State and works to increase financial education and investment literacy within the communities it works with. To date, the fund has raised $1.2 million through grants, donations, and investors, which it has distributed to black communities and farmers. In addition, Watkins sits on the Board of Directors of Soul Fire Farm.

About: A long-time educator and urban farmer, Malik Yakini served as the principal of Nsoroma Institute, a now-closed Afro-centered K-8 school in Detroit, for more than 20 years. In 1999, while working at Nsoroma Institute, he developed a food security curriculum aimed at increasing critical thinking about the food system throughout the school community. In 2006, he expanded this mission to improve community food access and education by founding the Detroit Black Community Food Security Network (DBCFSN), a nonprofit establishing local urban agriculture projects and working to recenter communities of color in the food security movement. In 2011, Yakini became the full-time Executive Director at DBCFSN, dedicating himself to the organization’s mission of inspiring individual and policy-level change within the food system, increasing community food security, and creating a more equitable food system in Detroit. DBCFSN’s latest project is launching a full-scale co-op in Detroit’s North End. Located in the Detroit Food Commons, a larger community development project also organized by DBCFSN, The Detroit People’s Food Co-op will be fully member-owned and open to the public. Originally slated to open in summer of 2020, the project has been delayed due to the coronavirus.

About: Sophia Roe is a chef, writer and advocate working to build community wellness and advance food justice through the lens of diversity and inclusivity. She has built a notable following on Instagram, where she advocates for individual and community wellness and trauma healing, and speaks out about food insecurity in the U.S. Her approachable and fun manner of utilizing social media livestreams and Q and A’s to engage with the public creates an accessible environment that celebrates diversity, joy and creativity in connection with food and also educates followers on social and racial inequalities within the food system. Roe has been featured in Cherry Bombemagazine, Vogue, Bon Appétit, Architectural Digest, Domino, Harper’s Bazaar, Well + Good, Coveteur, Romance Journal, Sumac Magazine, and Marie Claire France. Her most recent project is Counter Space, a docu-series airing on the Vice network, which explores resiliency and awareness in food systems and food justice, and the impact of food around the globe.

About: Toni Tipton-Martin is a James Beard Award-Winning food and nutrition journalist and cookbook author who has long worked to highlight and celebrate the rich contributions that African Americans have made to America’s food culture. She began her career as a journalist writing for the Los Angeles Times and Heart and Soul Magazine. In 1991, she became the food editor of the Cleveland Plain Dealer, making her the first African American woman to hold that position at a major daily newspaper. In 2009, she launched the blog The Jemima Code, where she shared recipes she had collected from 300 rare black cookbooks and highlighted the many talented but largely invisible African American cooks who helped shape American food and culture. In 2015,she gathered the information from her blog to create her first book, Jubilee: Recipes From Two Centuries of African American Cooking. In 2008, Tipton-Martin launched the SANDE Youth Project, a nonprofit working to combat childhood hunger and obesity through community events that connect cooking and wellness to cultural heritage. In addition, she is a founding member of the Southern Foodways Alliance and Texas Foodways, two organizations whose goal is to preserve the history and culture surrounding local foods. Finally, she is a seasoned guest lecturer and educator as well as a member of the James Beard Awards Committee and the Oldways African Heritage Diet Pyramid Advisory Committee.

About: Tony Hillery is the founder and executive director of Harlem Grown, a Harlem-based nonprofit that works to provide youth with opportunities to connect with and learn about food through hands-on urban farming, sustainability, and nutrition programs. Founded in 2011, Harlem Grown now operates 12 urban agriculture sites, including hydroponic greenhouses, urban farms and school gardens, in upper Manhattan and provides opportunities for education and mentorship around sustainability and food education across local communities.

Read His Book: Hillery’s 2020 children’s book, Harlem Grown: How One Big Idea Transformed a Neighborhood, tells the story of how Harlem Grown began.

December 23, 2016
Subscribe To Weekly NYC Food Policy Watch Newsletter
Subscribe to our weekly email newsletter today to receive updates on the latest news, reports and event information
We respect your privacy. Your information is safe and will never be shared.