On March 25, 2015, the New York City Council Committee on Education, chaired by Councilmember Danny Dromm, held a Fiscal year 2016 preliminary budget hearing. Among the interest groups appearing to present testimony to the Council were supporters of universal free school meals citywide. Here we provide an overview of the testimony and events of the day focusing on the effort around universal free meals in all New York City public schools.

New York City Department of Education Chancellor Carmen Fariña began the day, delivering her testimony highlighting some of the department’s recent key initiatives: progress implementing universal Pre-K for All, new investment in arts education, restorative justice program, the creation of 100 new sports teams in small schools, a new framework for guiding and measuring school quality called Framework for Great Schools, and the investment of $150 million in the School Renewal Program, “a multi-year initiative to turnaround struggling schools”. The Chancellor spoke to the universal school lunch pilot program in the city’s 291 free-standing middle schools for children in grades 6-8 and highlighted the news that there has been a “6.4 percent increase in the lunch participation rate in the middle schools in this program” and that they are currently studying the cost implications of expanding the program[1]

Several observers noted that the proceedings of the hearing were less combative than in years past. When questioned on the cost of expansion of universal free lunch, Chancellor Fariña responded that she is willing to rethink, based on the pilot, but cost will be a factor- and she called the expansion an expensive proposition . However, Chair Dromm expressed support for universal free meals expansion and a desire to discuss the costs more explicitly outside of the hearing. 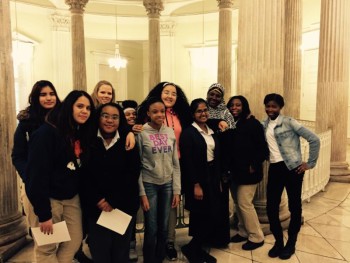 Lunch 4 Learning student leaders from Bushwick Youth Policy Council and the Union Settlement Bridges Program delivered testimony in support of expanding universal free school lunch to all New York City schools. These students provided insights into the challenges faced by students in school, sharing their experiences in the lunchroom. Simone Springer, a 16 year old junior at the Brooklyn School for Math and Research at Bushwick High School Campus seemed to capture the spirit of her fellow when she said: “Students who pay for lunch are labeled as rich and the students who don’t are bullied for being poor. We should not have this inequality in our lunchroom. No one should be bullied for the food they eat. Remember students who don’t eat lunch don’t learn, and if they don’t learn they could fail.” Several middle school students expressed concerns that they would be moving on to high schools in which school lunch was not free for all.

Christina Fernández, MD, MPH, FAAP, general pediatrician practicing in Washington Heights. Dr. Fernández emphasized the health implications of skipped meals among adolescents and noted the influence of social determinants like stronger interests in peer-relationships on adolescent behavior. In the critically important developmental years of early adolescence, this increased focus on peer-acceptance can be even stronger than a teen’s physiologic needs for things like food – and contributes in part to the increase in bullying seen in this age group.

Alleyne Hughly, Parent Leader, President, Citywide Council on High Schools, called on the City Council to “fit the free lunch program into your budget,” handing the council a resolution passed by the Citywide Council on High Schools to support the free lunch program. Ms. Hughly emphasized the dire need for this feeding program in a city where one in every four children lives in a home that does not have enough food, and said New York City should be taking advantage of these federal options and make the small investment needed to ensure that no student pays for a meal.

Liz Accles, Executive Director, Community Food Advocates highlighted the new evidence of success of the universal school lunch pilot in free-standing middle schools: Compared to the period of September – December 2013, September – December 2014 saw an 8% increase in middle school lunch participation, while participation in elementary and high schools remained flat or decreased – a highly significant finding. She reported that the City has brought in an additional $4.1 million in federal revenue in the first four months of universal being implemented in middle schools, compared to the previous year. 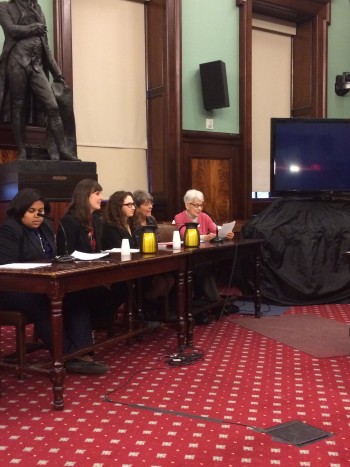 Jan Poppendieck, Policy Director, NYC Food Policy Center at Hunter College, citing the Center’s commitment to evidence -based social policy, pointed out that by piloting the universal meals program in middle schools only the City has created what social scientists call a”natural experiment.” Now the evidence from that experiment is in. Participation rose significantly (more than 8%) over the first four months of the 2014-2015 school year in the pilot schools – whereas it remained flat or declined in elementary and high schools. Poppendieck reminded the Council that the income eligibility cutoff for free and reduced meals is the same in NYC as it is nationwide, while costs of living are much higher in New York than in many other areas. Thus many families that are over the eligibility cut off are still struggling to meet needs. A universal free policy helps combat hunger by making meals available to all children, regardless of income, and encouraging them to eat them by removing the stigma. “Not only does this address the hunger issue and enable students to eat a meal that’s free of shame, it also addresses diet related diseases. Meals have gotten healthier,” she said, citing the mounting evidence that the meals prepared and served at schools are healthier than meals packed at home.

Speaking about the importance of school meals to low-income students in New York City public schools, the New York City Coalition Against Hunger called for an expansion of Breakfast After the Bell. Ms. Levy cited a recent Food Research Action Center Report that of the 62 largest urban school districts, New York City ranked second to last in breakfast participation. Here, just 35.4% of students receiving reduced price or free lunch also received breakfast. FRAC’s analysis also revealed that the New York City Department of Education would collect an additional $51 million in federal funds, serving 181,672 more low-income students if it had met a 70:100 ratio between Free and Reduced Price Breakfast and Free and Reduced Price Lunch in the 2013-2014 school year.

The City will continue working to finalize the budget through June. We thank the New York City Council for the opportunity to delivery testimony and look to its leadership in ensuring that all students in New York City public schools have access to free, nutritious meals to support their developmental and educational success.

Additional reading and for more information

Check the City Council’s calendar of events – for opportunities to give testimony at future hearings, which are open to the public.

An Atlanta Hip-Hop Artist and a Social Entrepreneur...

The Hidden Problem of Food Insecurity Among Asian...

This Organization is Working to End College...

July 6, 2016
Subscribe To Weekly NYC Food Policy Watch Newsletter
Subscribe to our weekly email newsletter today to receive updates on the latest news, reports and event information
We respect your privacy. Your information is safe and will never be shared.