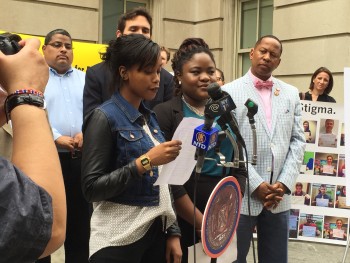 Free school lunches were listed as a priority for last year’s city budget by the City Council. However, the program piloted only in stand-alone NYC middle schools. This year, the program has not been included in the City Council’s budget as well, which is due to take effect on July 1, 2015. As the date fast approaches, we present fresh statistics on how the universal school lunches in middle schools have fared so far, and what the implications of <0.03% of the City Council’s budget could look like for food security amongst NYC school children.

In 2015, Community Food Advocates compared school students’ participation in the school lunch program for the first six months of the 2014-2015 school year to the same months in the 2013-2014 school year. Results are presented in the table below.1,2

More Than a Meal Program Connects Individuals in...

5 NYC Hospital Programs That Use Food...

The Hidden Problem of Food Insecurity Among...

January 26, 2021
Subscribe To Weekly NYC Food Policy Watch Newsletter
Subscribe to our weekly email newsletter today to receive updates on the latest news, reports and event information
We respect your privacy. Your information is safe and will never be shared.