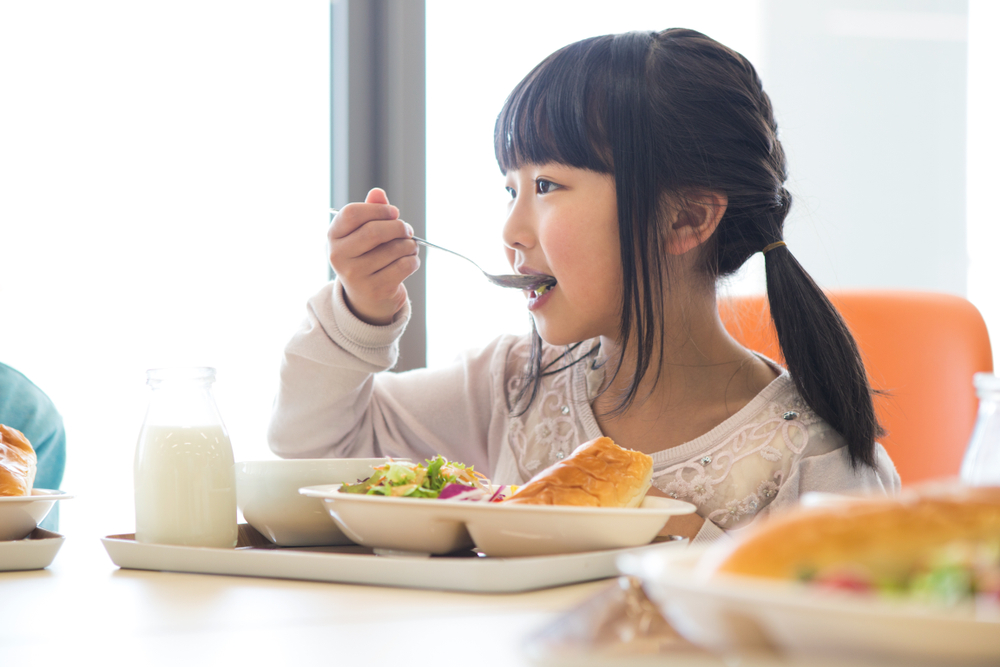 Overview: In primary and junior high schools in Japan, children are not allowed to bring their lunch from home. All students must eat the same school lunch, following a menu planned by nutritionists. Lunch is considered not only a time to feed students, but also an opportunity to educate them about food and nutrition. School lunch is referred to as shokuiku, which means “food and nutrition education.”

Program goals: To teach kids healthy eating habits at an early age; to help them understand the importance of nutritious foods; and to provide students with the calories and nutrition they might not receive at home.

How it works: The school lunch program is mandatory for students in Japan, and while it is not free for all students, it is highly subsidized and costs about $2.50 per meal. Lunch menus are provided by nutritionists to ensure that the students receive a balanced, healthy meal every day. All meals are prepared with fresh foods (not frozen or processed), contain 600 to 700 calories and include carbohydrates, meat or fish, and vegetables. Each year the Japanese government studies nutrition and eating patterns throughout the country and uses that information to help determine how the menus are created.  Lunches are usually served and consumed in the classroom rather than in a cafeteria, and students typically serve each other and clean up after themselves.

The term shokuiku refers to food and nutrition education, which is an additional universal component of Japanese school lunches. Students learn about what they are eating and why certain foods and nutrients are good for them. Some schools offer a daily broadcast that outlines the nutritional components of the day’s lunch, and students in primary schools make a game out of sorting pictures of foods into categories such as carbohydrates and proteins.

Progress to date: Because of concerns about food shortages and nutritional deficits after World War II, the School Lunch Act was implemented in 1954 to provide lunch to all students in Japan. It was not until the 1970s, though,  that those lunches began to meet the nutritional standards they have today. In June 2005, the Basic Law on Shokuiku was enacted in response to rising numbers of eating disorders among Japanese youth, and in April 2007, the Diet and Nutrition Teacher System was established to enhance the educational component of the program. In 2008, the “School Lunch Act” was revised to emphasize a focus on food and nutrition education.

Why it is important: Obesity rates among both adults and children in Japan are the lowest among all developed nations, largely because Japanese culture encourages people to follow the principles of shokuiku and follow a healthy, balanced diet. However, Japan also has a high rate of eating disorders, so shokuiku helps to teach children from a young age about the importance of food and specific nutrients for health, learning, and development. In addition, school lunch is an essential source of nutrition for students from low-income families who may not have access to a full nutritious meal at home.

Program/Policy initiated: The Basic Law on Shokuiku was enacted in 2005, and the government began hiring diet and nutrition teachers in 2007.

Similar practices: Japan’s school lunch program and the concept of shokuiku in schools is highly regarded and used as a model for health worldwide. In the US, the nonprofit Table for Two created a program called Wa-Shokuiku, which teaches elementary and middle school students about nutrition and cooking, using Japanese food and dietary customs as a prototype.

Evaluation: Shokuiku has had a positive impact on  students, teachers, and families, including:

The Washington Post reported in 2013 that parents often call their children’s school to get the lunch recipes after hearing the child talk excitedly and positively about what they ate.

September 28, 2021
Subscribe To Weekly NYC Food Policy Watch Newsletter
Subscribe to our weekly email newsletter today to receive updates on the latest news, reports and event information
We respect your privacy. Your information is safe and will never be shared.