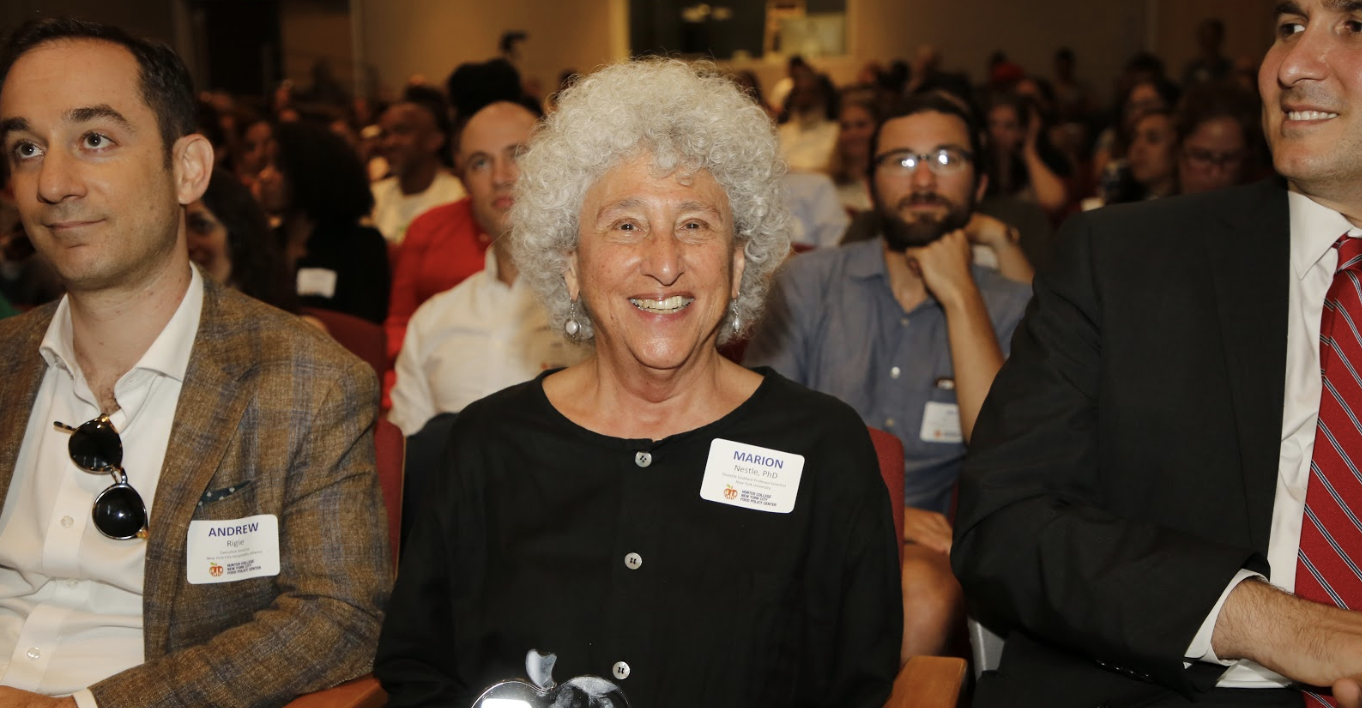 The Hunter College NYC Food Policy Center has announced its first annual NYC Food Policy Changemaker award. One NYC food policy and practice leader who is working to transform the food system will be honored every year by the Center. Nominees are policymakers, educators, community advocates, farmers, innovators and more, who are making significant strides to create healthier, more sustainable food environments, and who use food to promote community and economic development. This year’s award goes  to Dr. Marion Nestle.

Education: BA, PhDin molecular biology and an MPH in public health nutrition, all from the University of California, Berkeley

How she become connected to food: In an interview with DietDetective.com, Dr. Nestle said that, “I’ve always loved to eat! I grew up in New York City at a time when food was scarce and anything but fresh. When I was eight, my parents sent me to a small summer camp in southern Vermont run by a woman who had lived in China for many years and was a fabulous cook. The camp had a large vegetable garden, and if you were a good camper you were chosen to pick the vegetables for dinner. I went out to pick string beans and tasted one. It was a hot July day and the bean was warm, crisp, sweet, and wonderfully flavorful. I had no idea that was what beans were supposed to taste like. I’ve never looked back.”

It was years later, after her studies began, that her interest in food moved out of the garden and into the public sector. “In the early 1990s, I attended a meeting of the National Cancer Institute where anti-smoking advocates gave talks on how cigarettes were marketed to adults and children. I thought we nutritionists ought to be giving talks like that on Coca-Cola. I was tired of going to meetings on childhood obesity where everyone blamed parents and nobody talked about the role of food marketing. That’s what started it.”

Since then, Dr. Nestle has been an active voice in the food policy space and a steadfast public health advocate.

What she does: To say that Marion Nestle has only been a professor at New York University would be a tremendous understatement. When it comes to food policy and public health advocacy, Dr. Nestle is a guru. Through her books, blogging and teaching, she fearlessly and relentlessly pushes food companies and policy makers to think and care about the consumer.

Marion Nestle is Paulette Goddard Professor of Nutrition, Food Studies, and Public Health Emerita, at New York University, the department she chaired from 1988-2003 and from which she retired in September 2017. She is also Visiting Professor of Nutritional Sciences at Cornell. Her research, writing and teaching examine scientific and socioeconomic influences on food choice, obesity, and food safety, emphasizing the role of food marketing.

What makes her a changemaker: In 1996, along with food consultant Clark Wolf, she founded the Food Studies program at New York University. She hoped that the new program would raise the public’s awareness of food and its role in culture, society and personal nutrition. It not only succeeded but also inspired other universities to launch similar programs of their own. Through her role at NYU and her book, Food Politics: How the Food Industry Influences Nutrition and Health (2002), she has become a national influencer of food policy, nutrition, and food education.

In addition to Food Politics, she is the author of five other prize-winning books: Safe Food: The Politics of Food Safety (2003); What to Eat (2006); Why Calories Count: From Science to Politics, with Dr. Malden Nesheim (2012); Eat, Drink Vote: An Illustrated Guide to Food Politics (2013); and Soda Politics: Taking on Big Soda (and Winning) in 2015. She has also written two books about pet food: Pet Food Politics: The Chihuahua in the Coal Mine in 2008 and Feed Your Pet Right (also with Dr. Nesheim) in 2010. Her most recent book, Unsavory Truth: How Food Companies Skew the Science of What We Eat, was published in 2018 (and translated into Portuguese in 2019).

From 2008 to 2013, Dr. Nestle wrote a monthly column called Food Matters for the San Francisco Chronicle food section. She blogs almost daily at www.foodpolitics.com, her Twitter account, @marionnestle, has been named one of the top 10 in health and science by Time magazine, Science magazine, and The Guardian, and has more than 145,000 followers.

Honors and Awards: Marion Nestle has received many awards and honors.  In 2010 she received the John Dewey Award for Distinguished Public Service from Bard College. In 2011, the University of California School of Public Health at Berkeley named her as Public Health Hero. Also in 2011, Michael Pollan ranked her the second most powerful foodie in America (after Michelle Obama), and Mark Bittman ranked her #1 in his list of foodies to be thankful for. She received the James Beard Leadership Award in 2013, and in 2014 the U.S. Healthful Food Council’s Innovator of the Year Award and the Public Health Association of New York City’s Media Award. In 2016, Soda Politics won literary awards from the James Beard Foundation and the International Association of Culinary Professionals. In 2018, she was named one of the UC Berkeley School of Public Health’s 75 most distinguished graduates in 75 years, won a Trailblazer Award from the International Association of Culinary Professionals, and was selected Grande Dame of the year by Les Dames d’Escoffier International.

Engaging Youth to Become Agents of Change in Their Community

Why SNAP Benefits Need To Be Raised,...

May 29, 2018
Subscribe To Weekly NYC Food Policy Watch Newsletter
Subscribe to our weekly email newsletter today to receive updates on the latest news, reports and event information
We respect your privacy. Your information is safe and will never be shared.