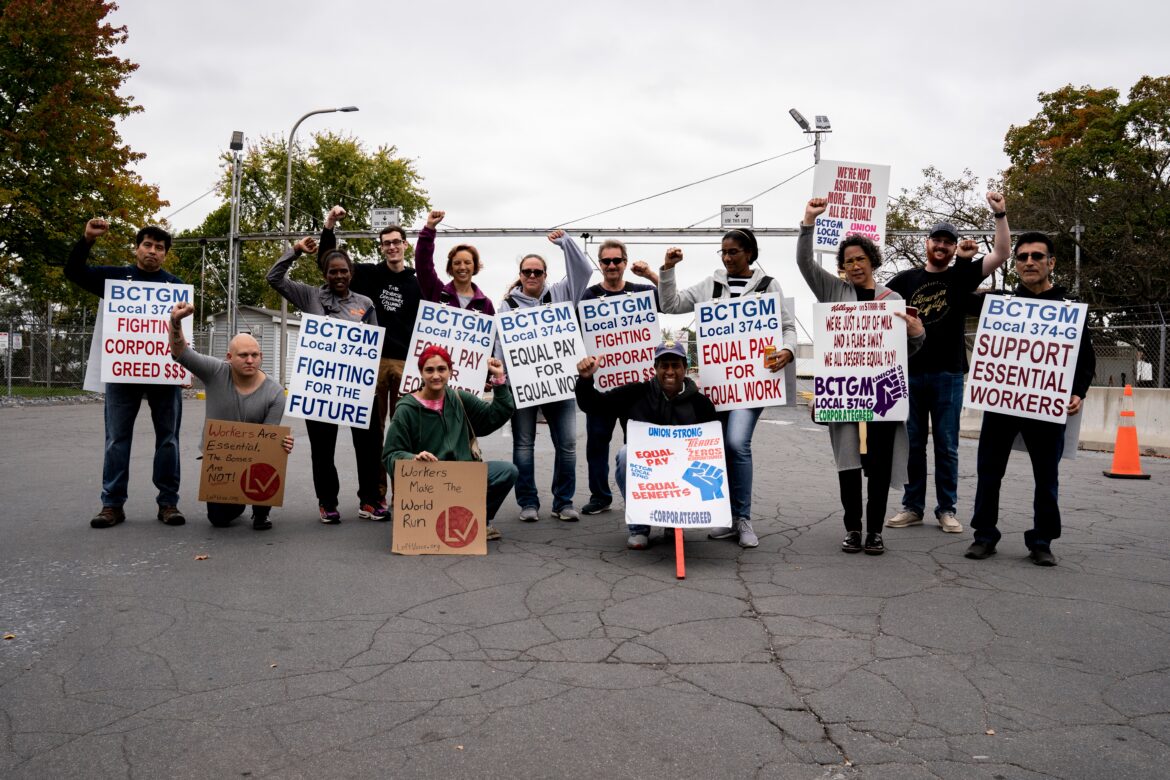 “For more than a year throughout the COVID-19 pandemic, Kellogg workers around the country have been working long, hard hours, day in and day out, to produce Kellogg ready-to-eat cereals for American families,” said BCTGM President Anthony Shelton in a press release dated October 5th, 2021. “Kellogg’s response to these loyal, hardworking employees has been to demand these workers give up quality health care, retirement benefits, and holiday and vacation pay.”

The Kellogg’s strike is the latest in a series of labor disputes between members of the BCTGM and major food manufacturers. In August 2021, thousands of union members employed by Nabisco (a subsidiary of Mondelez International) went on strike to push back against a new contract that would have reduced employees’ retirement benefits and increased hourly shifts from eight hours to 12. The workers also criticized the company’s domestic job cuts (Recent closures of Nabisco’s Fairlawn, New Jersey, and Atlanta, Georgia, plants resulted in the loss of roughly 1,000 positions.) and the outsourcing of jobs to Mexico. After six weeks of negotiations, BCTGM and management finally agreed on a new four-year contract that included increases in wages and the company’s 401(k) contributions.

Several weeks earlier, in July 2021, BCTGM members at a Frito-Lay plant in Topeka, Kansas, walked off the job to protest what they referred to as “suicide-shifts.” Striking workers accused the company of imposing forced overtime that left many workers with only eight hours between shifts. Company officials disputed the claims that workers regularly endured double or triple shifts as “grossly exaggerated” and noted that only two percent of the plant’s employees worked more than 60 hours a week. After nearly three weeks on the picket line, workers agreed to a new two-year contract guaranteeing a four percent wage increase for all employees and promising workers a greater voice in setting the company’s overtime policy.

The recent flurry of strikes reflects the strained relationships developing between many food factory workers and food manufacturers as they struggle to meet rising consumer demand. Throughout the pandemic, workers at food manufacturing plants have shouldered the burden of the changing food landscape and the increase in at-home dining. Classified as essential workers and facing an eight percent increase in cereal sales, Kellogg’s employees spent much of 2020 on the factory line. “We were hailed as heroes, we worked through the pandemic, seven days a week, 16 hours a day,” said Trevor Bidelman, an employee at the Battle Creek plant and the president of BCTGM Local3G, in an interview with The Guardian.

The demand for groceries like Kellogg’s ready-to-eat cereals has not abated even as many restaurants welcome back vaccinated indoor diners and expand their seating capacity. In response to the recent resurgence of COVID-19 fueled by the spread of the Delta variant, many people have begun to spend more time at home. This led to a nearly nine percent increase in demand for groceries in the second quarter of 2021. Already struggling to keep up consumer demand even before the strike, in September 2021, Kellogg notified grocery distributors that capacity constraints and labor shortages would leave its factories unable to fulfill some of the orders placed for Eggo pancakes, Rice Krispies Treats, and other products.

For Kellogg’s striking workers, the new contract proposal, combined with recent job cuts (including at the Battle Creek factory), seems to signal that the company is not willing to fairly compensate employees for their labor over the last eighteen months. Their labor, performed at a risk to their health, has translated to $1.25 billion in profits for the company and a compensation of $11.6 million for CEO Steven Cahillane. The stark contrast between these figures and the $33,000 average salary of food factory employees has prompted striking workers to accuse the company of greed. “Now apparently, we are no longer heroes,” Bidelman said.

Kellogg disputes the workers’ portrayal of the company, arguing that its labor policies reflect the demands of the food manufacturing industry. “Kellogg’s provides compensation and benefits for our US [ready-to-eat] cereal employees that are among the industry’s best,” said spokesperson Kris Bahner in a statement to CNN. “Our offer includes increases to pay and benefits for our employees, while helping us meet the challenges of the changing cereal business.” Betting on the appeal of its current compensation scheme, Kellogg posted a job ad on Indeed on October 11 seeking “Strike Replacement Workers” willing to “cross the picket line.”

October has seen a spate of protests among unionized workers as labor shortages and policy shifts under the Biden administration combine to create a political climate favorable to union organizing. Nationwide, employers are still struggling to fill an estimated 10.4 million jobs as the economy gradually recovers from the effects of the pandemic. The need for labor gives workers increased bargaining power to dictate the terms of their employment. President Biden’s repeated promises to lead “the most pro-union administration in history” have further empowered organized labor to fight for higher wages and better benefits. The resulting union activity on display this month has led Representative Alexandra Ocasio-Cortez (D-NY) to call it “Striketober” in a viral tweet.

In this contentious political moment, the striking Kellogg workers are not the only group of unionized employees to reject contracts featuring a two-tier wage system. On October 11, 2021, more than 24,000 nurses and healthcare workers employed by Kaiser Permanente in California and Oregon authorized a strike if the company does not reverse its plans to implement a two-tiered system. At John Deere, which has already implemented a two-tier system, roughly 10,000 members of the United Auto Workers union are currently on strike to press for higher wages and better retirement benefits for all employees, including recent and future hires.

Some experts, including University of Rhode Island professor Dr. Erik Loomis, a specialist in American labor history, predict that strikes will continue to play a key role in labor negotiations for the foreseeable future. In March, the Protecting the Right to Organize (PRO) Act passed Congress with bipartisan support. A core tenet of the act—fines for companies that impede the rights of unionized workers—is currently up for debate in the Senate as part of the budget reconciliation bill package. For Loomis, interviewed by Food Dive in October, the proposed legislation signals that Americans can expect “more strikes within the legal sense.” And, “Even outside of that,” he added, “workers will take matters into their own hands when they feel it is necessary to do so.”

Securing lasting improvements in food factory employees’ benefits and pay, however, will likely require more than union organizing. Consumers must also be willing to pay more for their groceries to support these workplace gains and higher wages for food workers. Food prices are already at a ten-year peak as of September due to supply-chain shortages caused by poor harvests, rising oil prices, unmet labor demands, and a range of other factors. It, therefore, remains unclear whether American shoppers, many of whom faced their own financial challenges during the pandemic, are prepared to prop up further price increases.

France to Eliminate Plastic Packaging from Fruits and Vegetables

March 12, 2015
Subscribe To Weekly NYC Food Policy Watch Newsletter
Subscribe to our weekly email newsletter today to receive updates on the latest news, reports and event information
We respect your privacy. Your information is safe and will never be shared.