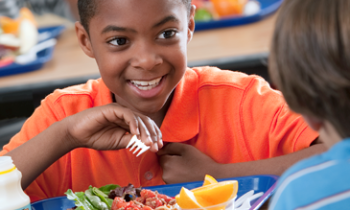 On February 25, the White House Let’s Move campaign announced new rules for competitive foods—foods sold in schools in competition with the official school lunch or breakfast, and announced the roll out of the “Community Eligibility Provision” [CEP] of the Healthy Hunger Free Kids Act of 2010. Widely known as CEO (for Community Eligibility Option, the name by which it was initially designated) CEP will now be available to provide universally free school meals to an additional 22,000 schools enrolling 9 million children. Here is how it works

A school, a school district, or any group of schools within a district is eligible to opt for CEP if at least 40 % of students are directly certified for Free (not reduced price) meals. Only the students who are “Identified” through participation in SNAP or TANF or similar direct certification–which is expanding as states become eligible to use Medicaid data for this purpose– “count” in establishing a school’s eligibility. Those who qualify for free meals through parental applications don’t. The schools that choose to participate will be reimbursed at the full free meal reimbursement rate of approximately $2.97-$3.03 per lunch or $ 1.89 for breakfast for 1.6 times the “identified” percentage of meals served. Thus, if a school has 50 % of its students direct certified for free, it will get reimbursements from USDA at the full free meal rate for 50% X 1.6 or 80 % of the meals it serves. The others will be reimbursed at the “full price” rate ($.27 or $.33 if they have achieved the HHFK standards). So, schools must find the dollars for the remaining meals, which they must serve free. A school with 60% direct certified would be reimbursed for 96% of meals—such a school will usually break even or come out ahead, depending on how the costs [ and thus the savings] of distributing and processing applications have been allocated. Good news: School systems [Local Educational Authorities or LEAs] can choose to submit on behalf of individual schools, pairs of schools, clusters, groups or the whole system. Detroit has been doing it citywide with great results. Boston is now doing it citywide, so we should have some information from a more typical school system in a while. Chicago does it only for a subset in which they calculated they could come out ahead.

The Community Eligibility Provision was rolled out gradually, 3 states at a time, and was always scheduled to become available to all states in 2014-15, unless the “pilots” were judged unsuccessful. The pilots found increased participation and other benefits. You can read a summary of the evaluation here.

Getting school systems to adopt this when their “Identified” % is between 40 and 63 will take local organizing–hence the Lunch 4 Learning campaign in New York City.

Speaking of Lunch 4 Learning, Public Advocate Letitia James held a press conference on Tuesday, March 11 to announce her support for universal free school meals in New York City; she urged the Mayor to implement the approach by ending the collection of fees immediately. Advocates under the leadership of Community Food Advocates are working hard with support from several City Council Members, including Ben Kallos who represents the district that is home to Hunter College and Education Committee Chair Danny Dromm, from the Teachers union, from the Council of Supervisors and Administrators, and from the NYC Food Forum.

See this month’s NYC By the Numbers for more information on the Lunch 4 Learning Campaign.

The Hidden Problem of Food Insecurity Among Asian...

All in East Harlem

June 1, 2013
Subscribe To Weekly NYC Food Policy Watch Newsletter
Subscribe to our weekly email newsletter today to receive updates on the latest news, reports and event information
We respect your privacy. Your information is safe and will never be shared.