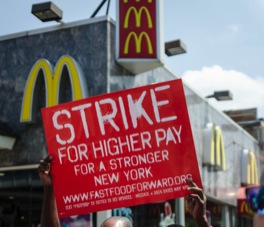 The fast food industry represents a significant segment of New York City’s food workforce and fills the stomachs of many New Yorkers with highly processed food. Here we provide some local and national statistics on these establishments and their workers.

Sources and for more information:

March 14, 2017
Subscribe To Weekly NYC Food Policy Watch Newsletter
Subscribe to our weekly email newsletter today to receive updates on the latest news, reports and event information
We respect your privacy. Your information is safe and will never be shared.