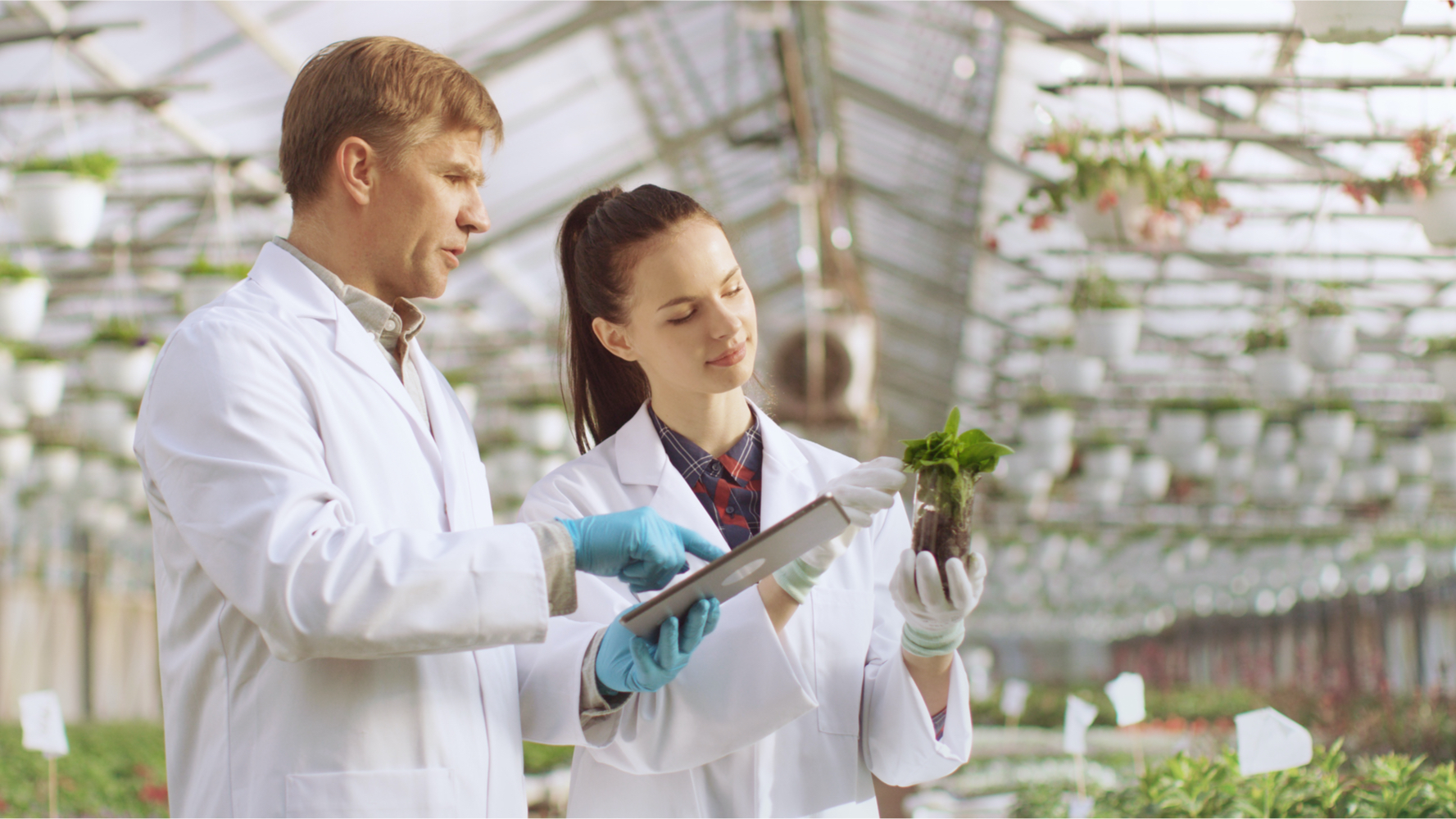 The Fourth Industrial Revolution is paving the way for new developments in food system technology. From robots that pick strawberries to smart greenhouses that can remotely control climate, technological advances in artificial intelligence, machine learning, and internet technologies are unlocking new possibilities for transparency and improved management across the food supply chain. These innovations have the potential to reduce waste, improve food quality and safety, cover labor shortages, fight against crop pests and pathogens, and engineer new and improved foods.* From tiny internet-connected sensors to robots with human-like sensory capabilities, these new technological advances and applications may play an important role in increasing crop yields and managing resource use to meet food production demands as the global population continues to grow.

What it does: Physical objects embedded with high tech sensors and software that transmit and share information via the internet are being used in the food system to provide stakeholders with key information that helps them to manage food production and distribution along every step of the food chain.

How it is being used: IoT technology is being employed to enhance companies’ abilities to monitor food production, ensure food safety and quality, monitor maintenance systems to prevent failures, and manage facilities remotely. The technology has significant implications for food waste and for maximizing yields. For example, companies such as Centaur Analytics have developed small IoT sensors that can be placed in bulk storage units to monitor temperature and humidity during storage and transportation to ensure that food is delivered to retailers before it expires. Sanku and Vodafone have teamed up to fight hunger by using IoT solutions to manage dosage in order to enable remote fortification of flour at small mills in Africa, thus allowing for greater quantities of flour in East African countries to be efficiently fortified with critical nutrients and distributed to local populations.

What it does: A variety of companies are currently developing vending machines to distribute healthier foods, but several companies in China have taken it a step further, creating AI controlled machines that allow customers to easily purchase fresh produce. In Suzhou, Beijing Kuo’an Science and Technology Co., Ltd’s Convenient E-Fresh Vending Machines stock fresh fruits and vegetables, thus providing a way for customers to purchase fresh produce contact-free. Customers scan a machine readable code on a section of the vending machine to open it. Once they select their product, built-in scales weigh the amount removed and calculate pricing The customer uses WeChat or AliPay to pay for their selection. Cameras on both sides of the vending machine monitor customers to ensure safety and prevent theft. Haiyouhe Huimin Science and Technology Co.’s vending machine operates in much the same way, utilizing AI and Internet of Things (IoT) technology to efficiently provide produce to Chinese shoppers without requiring personnel to supervise the transactions. E-commerce giant JD has also developed AI vending machines that are currently installed in Beijing, Shanghai and Chongqing, where they provide 24/7 access to produce sourced from local JD supermarkets.

How it is being used: The fully-automated vending machines are being used to provide citizens with access to fresh produce purchased straight from local wholesalers. The small size of the vending machines allows companies that use them to save on cost of rent (because they take up less room) and labor (because they cut down on personnel), while providing customers with a more convenient retail option. Many of these programs have taken off during the COVID-19 pandemic as demand for contract-less shopping has risen. The machines also have the potential to increase access to fresh produce because they can be installed in spaces where full-service grocery stores may not be an option.

What it does: A wide-range of companies including Softrobotics, SynTouch, and IBM Research,have developed or are currently developing robots that use artificial intelligence (AI) and machine learning (ML) to to complete a variety of human-like operations. at many stages along the food production chain.

How it is being used: Robots that can see, hear, smell, taste, and touch are being used to verify product quality, identify contaminants and pathogens, and examine products for irregularities. Robots with integrated sensory and measuring systems can be used to cut, package, and process foods in production facilities. Companies like Kraft Heinz and Nestlé are using robots to ensure food product quality and assist with production, McCormick and Company is working with IBM Research to design new flavor experiences, and NYC-based startup Analytical Flavor Systems has created an AI platform and app that help them collect information about customers’ individual food preferences, which they can then sell to food companies. The possibilities for advanced sensory robot use in the food industry are extensive, with the potential for robot senses to exceed human sensory capabilities; however, complex computing systems are still being developed to provide robots with the capacity to achieve complex tasks and ensure that they are safe.

What it does: Smart greenhouses are currently in use across the globe. These green houses use hardware devices such as LED grow lights, HVAC systems, and irrigation systems paired with Internet of Things (IoT) sensors that collect information on a variety of environmental factors including humidity, temperature and light levels. This information is then relayed to the greenhouses’ programming systems to create regulated environments for optimized food production. These technologies allow for remote and/or automated management of crops and greater control over resource use and the parameters that influence growth rates.

How it is being used: Smart greenhouses are currently being used to minimize labor, maximize efficiency, and increase crop yields. They are being outfitted with Wavelength-Selective Photovoltaic Systems (WSPVs) that enable them to generate solar electricity more efficiently and at a lower cost, auto dialers that automatically update farmers if their greenhouse conditions fluctuate beyond ideal ranges, and IoT sensors that enable data-driven decision making. Although a wide variety of products are on the market for commercial use, France-based myfood has developed the first smart greenhouse for private individual use. Their smart greenhouses range in price from $5,572 to $27,913, depending on size, and can be installed in residential backyards and urban rooftops or balconies, allowing for individual families to tap into smart greenhouse technologies and grow food for themselves. Whether at the industrial or individual level, smart greenhouses provide an opportunity for improved crop management, creating the potential for increasing yields while reducing resources and associated farming costs.

What it does: Pattern Ag’s DNA testing enables farmers growing corn and/or soy to identify pests in their soil before and during production. To run the test, farmers send a soil sample  to the PatternAg labs, where specialists use DNA sequencing technology to read the DNA of the living layer of soil in order to detect pathogens such as insects and nematodes, root and stalk rot, and more. The DNA test results can then be used to inform farmers’ planting and crop care practices.

How it is being used: Launched in 2018, Pattern Ag’s DNA technology can help farmers identify the health and fertility of their soil before planting in order to maximize crop production and minimize costs associated with crop pathogens. It is currently helping farmers in the Midwest to manage key farming practices including, crop rotation, seed selection and placement, population density and fertility, and more. The company’s low price-point for service ($4.50-$6/acre) makes the service widely accessible, and they have recently received $15 million in outside funding to expand their operation.

How it is being used: Companies including AgroBot, Harvest CROO, Harvest Automation, and Abundant Robotics have developed harvesting robots, Bear Flag Robotics is developing a self-driving tractor, Naio Technologies and Nexus Robotics have produced weed-killing machines, and American Robotics has created an aerial imaging drone that can gather information on crop stress. These new technologies can be used to cost-efficiently help farmers faced with aging workforces, labor shortages and environmental hazards, and are revolutionizing the way they plant and harvest, allowing for more standardization and precision in the food production process. Agricultural robots are one way to optimize food production in order to meet the demands of a growing global population.

What it does: 3D printing is not an entirely new concept, but it’s application in the food industry is still developing. Much like standard 3D printing, 3D food printers utilize digital information to transmit commands to multiple nozzles on the printer that create extruded foods layer by layer. Capsules of blended food are loaded into a 3D printer, the user selects a recipe or food they would like to make either on the printer or a Wi-Fi app. Based on their selection, the 3D printer then prints out the desired food.

How it will be used: Although 3D printing was first employed to create chocolates, desserts, and other processed foods, the technology is now being revolutionized to create meals from fruits, vegetables, and other healthy ingredients. Tech company Natural Machines launched their 3D food printer, the Foodini, in 2014, and is now using the technology to create foods from blended whole food ingredients. The machine, which retails at $4000, allows users to print out favorites such as cereal and snack foods without the additives that may be found in commercially-produced alternatives. Natural Machines is also working with the Icelandic company Matís to reprint “ugly” pieces of fish into more appealing cuts in order to reduce food waste. German company Biozoon has developed texturizers that can be mixed with pureed ingredients and 3D printed to form “smooth foods” suitable for the elderly or hospital patients who have difficulty chewing and swallowing,  and in 2016 Silicon Valley-based start up BeeHex received a $125,000 grant from NASA to develop a machine that can print pizzas for astronauts in space. Their printer, Chef 3D, is now being used commercially to produce pizzas in only six minutes. Although kinks in 3D printing capabilities are still being worked out, and 3D printers are unlikely to replace traditional cooking practices, they provide opportunities for users to recreate healthier versions of favorite foods and have the potential to increase food production capabilities and reduce food waste in the future.

What it does: More than 20 research teams across the globe are currently using CRISPR technology to edit crop genetics. CRISPR, short for clustered regularly interspaced short palindromic repeats, is a microbial ‘immune system’ that uses bacteria and Archaea to recognize and destroy viruses in genetic sequences. There are many applications for the technology, but in the food industry it can be used to precisely cut and alter an organism’s genome in what the proponents claim to be the least disruptive modification process seen yet.

How it is being used: Originally developed in 2013 by Jennifer Doudna and Emmanuelle Charpentier, the technology is now being used to improve a variety of crops including, rice, potatoes, and wheat. Although CRISPR-modified products have yet to make it to the market, they have significant implications. Minnesota-based company Calyxt has used CRISPR tech to modify soybeans that produce healthier oil with a longer shelf-life, and Delaware-based Corteva is improving waxy corn, which is used to thicken food and create shiny paper.

The technology has potential to create disease-resistant plants and help feed growing populations by increasing crop yield and the nutritional value of foods.. However, the regulation of CRISPR-edited crops is still being debated, with the European Union and the United States Department of Agriculture at odds over whether such crops qualify as Genetically Modified Organism (GMOs).

5 Ways to Help Fight Food Insecurity During the Holidays

April 14, 2022
Subscribe To Weekly NYC Food Policy Watch Newsletter
Subscribe to our weekly email newsletter today to receive updates on the latest news, reports and event information
We respect your privacy. Your information is safe and will never be shared.