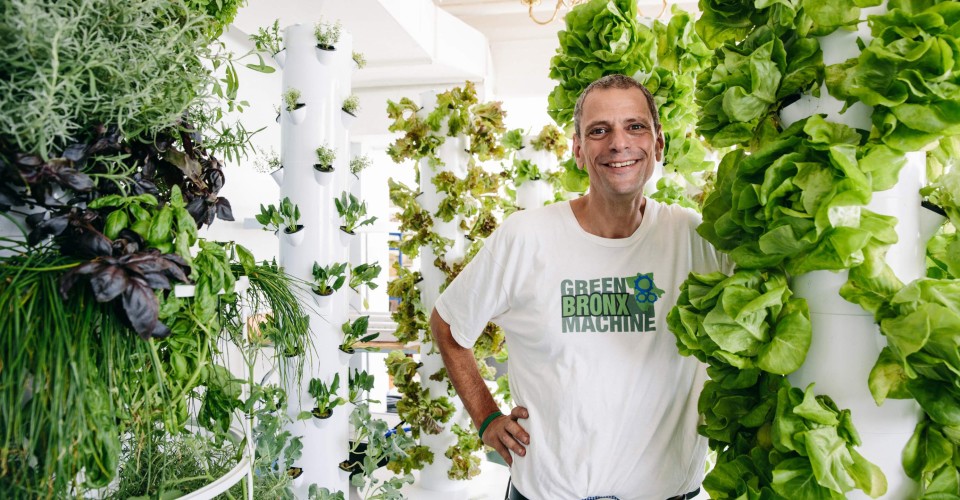 Why They’re Food Heroes: When COVID-19 hit, Green Bronx Machine shifted gears in order to address growing food insecurity in the Bronx due to the pandemic. Stephen Ritz, his wife Lizette, and daughter Michaela Ritz jumped into action, channeling their energy and the Green Bronx Machine resource and donations from the Steven & Alexandra Cohen Foundation to put together and deliver bags of fresh produce to hundreds of Bronx residents. Since the onset of the pandemic they developed new supply chains which have allowed them to deliver over 100,000 pounds of food to local communities and feed 2,300 people daily. In order to do this, Green Bronx Machine developed new relationships with local farmers and producers, rescued food destined for landfills, and continued to grow food in their classroom farms. Since the onset of the pandemic they have grown over 5,000 pounds of local Bronx produce which they have distributed to local communities. Green Bronx Machine pivoted to providing online cooking and gardening programming, providing more than 200 digital lessons and hosting online cooking classes and bringing their students on socially-distant field trips. Green Bronx Machine worked tirelessly to provide support for their students, turning their farms into WIFI hotspots and delivering weekly boxes with food, recipes, and books to their students at South Bronx’s Community School 55.

Background: Stephen Ritz began his career as a high school teacher in the South Bronx, where Green Bronx Machine was born out of a collaboration between him and his students as a response to the lack of healthy food options in the area and engagement opportunities for students. Ritz’s Bronx classroom was the first in the NYC Department of Education to feature an indoor edible classroom. Founded in 2012, Green Bronx Machine is a “for-purpose” 501(c)(3) organization which began as an after-school program for high school students in the Bronx, but quickly evolved into a K-12 educational program that is fully integrated into the New York core curriculum in the Bronx and beyond. The family-run organization is led by Stephen, his wife Lizette, Green Bronx Machine’s Executive Director, and their daughter Michaele, a longtime Green Bronx Machine volunteer who grew alongside many of the students in the program.

Work: Green Bronx Machine aims to educate youth through food system knowledge and workforce development while providing them with a chance to grow and cook their own food. The school-based model uses urban agriculture education to improve student health and educational performance, while building resilient and thriving communities. The organization runs an array of programs including the Food for Others Garden in the Bronx; the year-round, wheelchair accessible urban farm and culinary training kitchen at PS 721; the School Garden to School Cafeteria initiative in partnership with the NYC Department of Education and NYS Department of Agriculture; the Green Bronx Machine Institute in partnership with the NYC Department of Education and SUNY; and partnerships with various community organizations. In 2016, Green Bronx Machine built the National Health, Wellness, and Learning Center, transforming an underutilized library in Community School 55, a 100+-year-old school building in the South Bronx, into an educational and urban agriculture center. Ritz’s students and the extended community have produced over 100,000 pounds of vegetables in the Bronx and have moved student attendance rates from 40% to 93% daily, while providing 2,200 jobs to students. Green Bronx Machine program’s messages of “Si Se Puede” and “Amer-I-Can,” offer visions of innovation, hope and resiliency for the Bronx community and for the potential of school-based urban agriculture programs across the country. Through Green Bronx Machine programs and curriculum thousands of students have gained critical knowledge of food systems, urban agriculture, and healthy lifestyles, providing them with the tools to create change within their own lives and communities.

In 2017, Stephen Ritz, founder and Executive Director of Green Bronx Machine, released his first book, The Power of a Plant, written with Suzie Boss. The book includes practical solutions for helping students to thrive through engaged food education, telling Ritz’s own story as an educator along the way. Green Bronx Machine also recently released a documentary, Generation Growth, that follows the story of Green Bronx Machine. The documentary received the Spotlight Award and Audience Choice Award at the Heartland Film Festival and is currently available for private screenings. The trailer can be found here.

Awards, Praise and Honors: Ritz’s work has been lauded many times over, he has been awarded the United States EPA Award, named a Top Ten Finalist for the Global Teacher Prize and a Global Humanitarian and Food Tank Hero, recognized by American Teacher: Heroes in the Classroom as one of the top fifty teachers in America, and has presented at the Obama White House. Through Green Bronx Machine programs and curriculum thousands of students have gained critical knowledge of food systems, urban agriculture, and healthy lifestyles, providing them with the tools to create change within their own lives and communities.