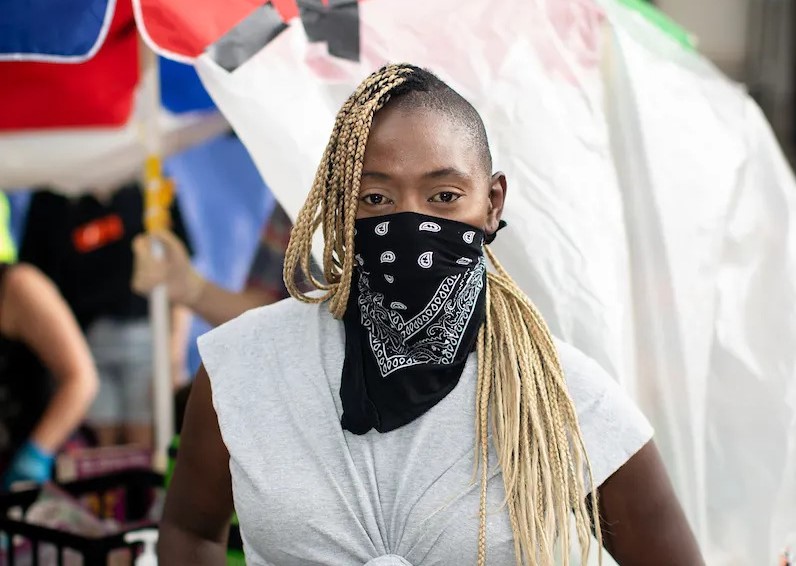 Why She’s a Food Hero: When protests broke out across the city after the release of the George Floyd video, Lucy Saintcyr supported those who were on the ground occupying City Hall in the summer of 2020. She knew some of the activists through the restaurant industry, and brought them hot food: two classic Haitian dishes. Seeing the amount of need at these protests inspired her to reach out to other chefs she knew and set up a 24-hour“mobile kitchen” at the encampment to feed protesters, which eventually became the Supper Collective. This required creation of a system to ensure food was safely handled and equitably distributed to everyone who needed it. At the peak of the occupation, the Supper Collective was distributing two thousand meals every day, with peak hours of 2-4am when protesters returned to the camp after evening protests.

Background: Before the COVID-19 pandemic, Saintcyr was a manager of two French restaurants that were closed during lockdown. She had been working at numerous New York City restaurants for six years, including the Michelin-starred Oxomoco. She has also stated that she was homeless for six years in Boston, and that experience gave her a unique perspective on how to best assist the homeless in New York City.

Work: After the Occupy movement faded, the team continued their work providing ready-to-eat food and PPE to protesters, activists, and anyone else in need. They also attended protests in Washington D.C. over the summer of 2020 to feed protesters beyond New York City. Today, the Supper Collective organizes drives for food, clothing, PPE, and other needed items, and distributes these items and hot meals throughout Brooklyn and Manhattan.

Awards, Praise and Honors: The Supper Collective’s efforts have been featured by Eater and TimeOut New York.

The Saavedra-Mendez Family and the La Morada...