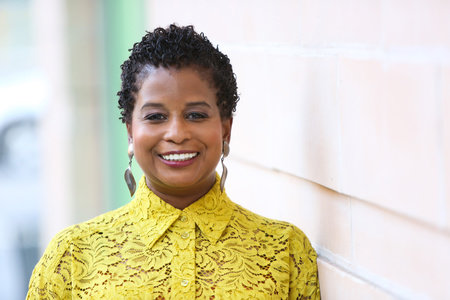 Why She’s a Food Hero: Nikita Stewart is a New York Times reporter who highlighted community food relief efforts in New York City in her reporting during the pandemic. In November of 2020, Stewart was featured in an episode of the New York Times podcast, The Daily. In the episode, Stewart, along with show producers Annie Brown and Stella Tan, spend a day at the Council of Peoples Organization (COPO) food pantry in Brooklyn. The episode, “A Day at the Food Pantry,” highlighted the growing demands that the COPO and other food pantries across the city have faced in the last year due to the COVID-19 pandemic, introducing listeners to Mohammad Razvi, COPO’s Executive Director, and several of the many clients waiting hours in long lines to receive food. In the episode, Stewart discusses her own experiences with poverty and food insecurity growing up, as well as her time covering social issues at the Times. She comments that in her experience covering poverty the hardest part is seeing the “the lack of choices and the waiting,” that people undergo in order to access food and other essential resources. The episode helped to shed light on growing food insecurity across NYC during the pandemic, and the critical organizations like COPO working to continue to provide food for New Yorkers in need. Since the onset of COVID-19, Stewart has also profiled many communities hit hard by the pandemic, reporting on local programs and initiatives working to provide food across the city. A recent article of note covers the impact of the COVID-19 on New Yorker’s ability to buy food and the food pantries that have become their lifeline.

Background: Nikita Stewart was born in Fort Hood, Texas. Her family later moved to the Republic of Panama before returning to Texas and finally settling in Bowling Green, Kentucky, where she attended high school. After graduating from Western Kentucky University, she began her career in journalism, writing first for The Courier-Journal in Louisville and The Star-Ledger in Newark, then joining the staff at the Washington Post. Stewart wrote for the Post for nine years, covering D.C. City Hall and writing for the investigative team. In 2014, she joined the staff at the New York Times as a City Hall reporter, but after writing a piece on the tragic police killing of Freddie Gray in Baltimore in 2015, she began to shift towards covering social service issues. In 2020, she was promoted to a management position, taking over as assistant editor on Metro, where she plays an essential role shaping the Times’ coverage of the city.

Work: As a Metro writer at the New York Times, Stewart’s coverage of social services has played a critical role in keeping New Yorkers and the New York Times readers across the country informed on homelessness, poverty, social service programs and initiatives, and low-income communities and communities of color in New York City. She has authored numerous articles on New York’s most vulnerable populations and has covered food policy issues including federal assistance program SNAP, local food banks and food pantries, and community organizations working to feed New Yorkers. Stewart is also the author of the 2020 book, Troop 6000: The Girl Scout Troop That Began in a Shelter and Inspired the World, and contributed to the New York Times Magazine’s ongoing initiative, The 1619 Project, authoring the piece, ‘We are committing educational malpractice’: Why slavery is mistaught—and worse—in American schools.

Awards, Praise and Honors: Nikita Stewart has received several awards from the Newswomen’s Club of New York. In 2018, she was recognized for her work covering homelessness, poverty, and mental health in the city, and in 2020 she was awarded the Ida B. Wells Award for Exceptional Coverage of Communities of Color. She was a finalist for both the Livingston Award at the University of Michigan and the Investigative Reporters and Editors Award.

Resources and References: The Daily Newsletter: A Reporter’s Diary through a Food Pantry in NYC (New York Times)

Beth Shapiro and the Citymeals on Wheels...