The Right to Food Global and Local 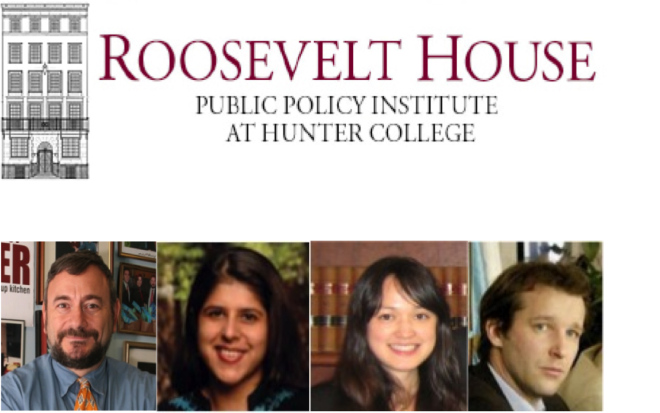 Join us at the Roosevelt House Public Policy Institute at Hunter College for a panel discussion on the Right to Food, Global and Local. Discussion will be followed by an audience Q&A and a reception honoring NYC food activists. 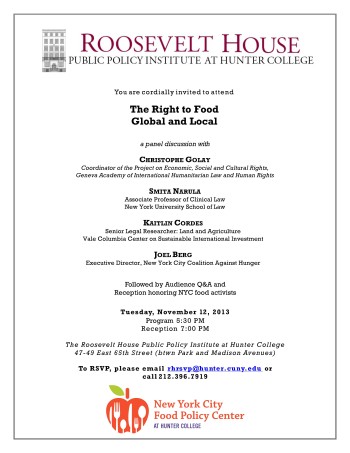 Smita Narula is a Faculty Director of the Center for Human Rights and Global Justice and Associate Professor of Clinical Law at NYU School of Law. In 2008 Narula was appointed legal adviser to the U.N. Special Rapporteur on the right to food. She is author of The Global Land Rush: Markets, Rights, and the Politics of Food (Stanford Journal of International Law) which critically assesses market- and rights-based responses to the global phenomenon of agricultural “land grabbing,” and co-authored the IHRC report Nourishing Change: Fulfilling the Right to Food in the United States, which uses a human rights lens to address the crisis of food insecurity in the United States. Before joining NYU in 2003, Narula spent six years at Human Rights Watch, first as the organization’s India researcher and later as Senior Researcher for South Asia.

Kaitlin Y. Cordes is Senior Legal Researcher at the Vale Columbia Center on Sustainable International Investment, leading its work on land and agriculture. She is co-editor of Accounting for Hunger: The Right to Food in the Era of Globalisation (2011), and worked in the Africa Division of Human Right Watch, where she was author of the report Ripe with Abuse: Human Rights Conditions in South Africa’s Fruit and Wine Industries (2011).  She served as an Advisor to the UN Special Rapporteur on the Right to Food, and worked with the Human Rights Institute at Columbia Law School. 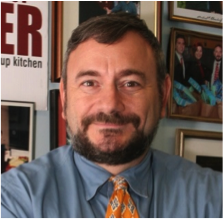 Joel Berg is Executive Director of the New York City Coalition Against Hunger, a Senior Fellow at the Center for American Progress, and author of All You Can Eat: How Hungry Is America? The Coalition represents more than 1,100 nonprofit soup kitchens and food pantries in New York City and the nearly 1.5 million low-income New Yorkers who live in households that cannot afford enough food, and seeks innovative solutions to help society move “beyond the soup kitchen” to self-sufficiency. Berg served for eight years in the Clinton Administration in senior executive service positions at USDA, including two years as USDA Coordinator of Community Food Security, in which he created the first-ever federal initiative to better enable nonprofit groups to fight hunger, bolster food security, and help low-income Americans move out of poverty.

Food Policy for Breakfast: The History and Politics of the SNAP Program – November 19, 2013

[…] on Health and Social Justice at the CUNY School of Public Health, and on November 12 we co-hosted The Right to Food, Global and Local, a Panel discussion hosted by the Roosevelt House Public Policy Center at Hunter […]

May 28, 2018
Subscribe To Weekly NYC Food Policy Watch Newsletter
Subscribe to our weekly email newsletter today to receive updates on the latest news, reports and event information
We respect your privacy. Your information is safe and will never be shared.