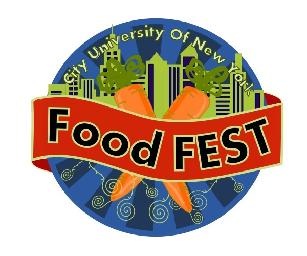 The 4th Annual CUNY FoodFEST will be held on

10:30am Registration and light breakfast

Followed by a vegetarian feast for all in attendance!

Registration is not required, but more information can be found here

SERVING NEW YORK CITY: Perspectives from NYC Food Service Workers on the Present and Future of Workers’ Rights and Organizing in their Industry The past few years have seen unprecedented food service worker organizing in New York City.

Hundreds of fast food workers walked off the job in a series of dramatic Fast Food Forward strikes, one the largest national strike actions ever among low-wage, non-union workers in the United States.

The Restaurant Opportunities Center New York (ROC-NY) has led restaurant workers in powerful fights against racism at Darden’s Restaurant Group, the nation’s largest restaurant company, as well as fights for wages and dignity at the Grand Cafe and other restaurants.

The Justice Will Be Served! campaign, a coalition of worker organizations has targeted numerous restaurants for unfair treatment of immigrant workers, especially those who make deliveries, and has won many victories, including against the giant Domino’s Pizza corporation.

Workers from all of these campaigns will be speaking on the “SERVING NEW YORK CITY” panel at the CUNY FoodFEST 2013, which asks: What is happening in the NYC food service industry to cause this unprecedented worker mobilization among many of New York’s most vulnerable workers? What has worked in the organizing and what hasn’t? What does all this mean for the future of food in NYC?

The Right to Food Global and Local

December 19, 2013
Subscribe To Weekly NYC Food Policy Watch Newsletter
Subscribe to our weekly email newsletter today to receive updates on the latest news, reports and event information
We respect your privacy. Your information is safe and will never be shared.