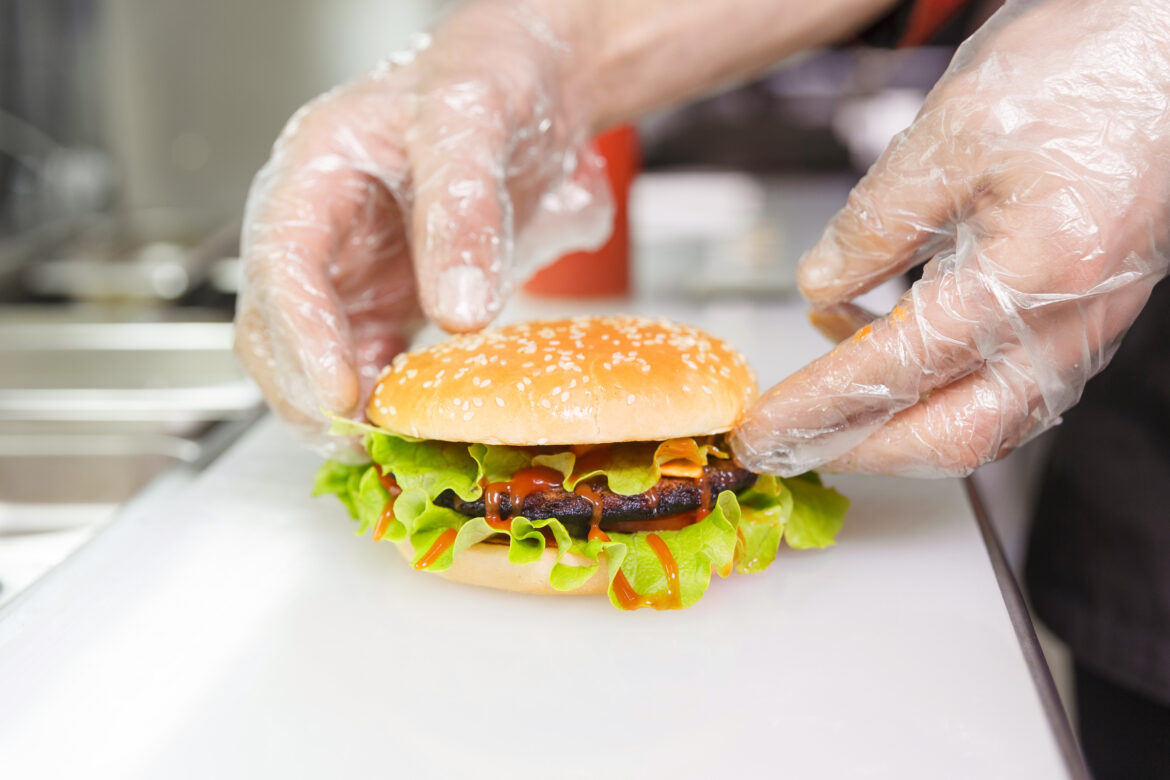 Two recent studies have raised health concerns regarding the prevalence of phthalates in the American food supply chain. These widely-used plasticizer chemicals are added to hundreds of products ranging from shampoo to garden hoses. One of their primary functions is to enhance the durability of polyvinyl chloride (PVC), a synthetic plastic used in vinyl, water pipes, shrinkwrap, bottles, and more. Their prevalence belies the health risks they may pose. Phthalates have been shown to impede hormone function and contribute to diabetes, heart disease, and obesity, among other conditions. The chemicals have also been implicated in neurodevelopmental disorders in children and reproductive issues in adult men and women.

Phthalates are widespread in the U.S. food system, present in industrial equipment, food packaging, and food-safe gloves. As a result, food that is subjected to industrial processing or prepared in a restaurant is likely to come in contact with a source of phthalates. The free-floating particles are readily transferable to foods they touch and are easily ingested or inhaled. Contaminated foods are the main source of phthalate exposure.

Responding to the growing body of evidence relating to phthalate toxicity, the U.S. has effectively banned its use in toys and other children’s products since 2008. The European Union’s ban extends to food containers, but the US has yet to follow suit. Therefore, phthalate exposure from processed foods still presents health risks to American consumers, as shown in two studies published last month.

Researchers chose to take their samples from fast food chains to shed light on the ubiquity of phthalates throughout the American food system. Testing found that plastic gloves, often blamed for phthalate contamination, contained lower levels of the chemicals than the food items themselves. As a result, researchers concluded that processed foods must pick up phthalates through contact with multiple phthalate-containing surfaces along the supply chain. Recent studies by scientists with the US Food and Drug Administration (FDA) have also found detectable levels of phthalates in fast food packaging and food processing materials, suggesting that conveyor belts and tubing are potential sources of phthalate contamination.

The GWU study builds upon prior research that used nationally representative data to link the routine consumption of ultra-processed foods to increased phthalate exposure. These previous studies found that people who regularly consume premade and fast food meals exhibit 35 to 40 percent higher phthalate levels than those who usually cook at home.

The high levels of phthalates in fast food items also pose concerns from a health equity perspective. A 2018 report published by the Centers for Disease Control and Prevention (CDC) found higher rates of fast food consumption among Black people in the US as compared to other racial or ethnic groups. An earlier study completed in 2016 demonstrated a greater correlation between fast food consumption and phthalate exposure among Black Americans as compared to White and Hispanic Americans.

These disparities can be connected to urban housing policies that result in racial residential segregation and create marginalized neighborhoods with limited access to nutritious food. Although such neighborhoods are commonly referred to as “food deserts,” many in the food justice movement prefer to describe them as the product of  “food apartheid.” Food justice leaders argue that the term “food desert” obscures the cultural vibrance of these neighborhoods and falsely suggests that food insecurity is a natural feature of the food system. “Food apartheid,” by contrast, draws attention to the way that systemic racism, economics, and geography intersect to create food injustice.

In the second study, researchers at NYU Grossman School of Medicine reported that phthalates in plastic food containers and cosmetics may contribute to as many as 100,000 premature deaths annually. Researchers analyzed urine samples collected from 5303 adults aged 55 to 64 as part of the US National Health and Nutrition Examination Survey 2001-2010 (NHANES). After testing the samples for phthalates, investigators compared the results to mortality data gathered on NHANES participants through 2015.

Researchers reported an increased risk of death from heart disease among individuals with the highest phthalate concentrations as compared to those with lower exposure. These results bolster earlier research linking phthalate exposure to changes in the gene expression of cardiac cells as well as heart disease symptoms like arrhythmia.

“Our research suggests that the toll of this chemical on society is much greater than we first thought,” said Dr. Leonardo Trasande, director of NYU Langone’s Center for the Investigation of Environmental Hazards, in a press release. “The evidence is undeniably clear that limiting exposure to toxic phthalates can help safeguard Americans’ physical and financial wellbeing.”

The Future of Phthalates in Food

Substantially reducing phthalate exposure from food would likely require that the FDA increase regulation of the chemicals. Research assessing the impact of the ban on phthalates in children’s products suggests that regulatory efforts help to curb phthalate exposure. The FDA, however, maintains that the agency has yet to see sufficient evidence that the chemicals negatively impact human health. As a result, the FDA continues to afford food packaging containing phthalates the Generally Recognized as Safe designation.

“Where new information raises safety questions, the FDA may revoke food additive approvals, if the FDA is no longer able to conclude that there is reasonable certainty of no harm from the authorized use,” said an FDA spokesperson to reporters from The Washington Post in response to the findings of the GWU study.

Until the U.S. expands regulations, public awareness campaigns can offer another means of reducing phthalate contamination in the food system. The push to remove phthalates from cosmetics offers examples of successful advocacy against the chemicals’ use. In the last two decades, public health groups such as the Campaign for Safe Cosmetics and Environmental Working Group (EWG) have alerted many consumers to the health risks associated with phthalate exposure. The EWG’s Skin Deep database offers consumers in-depth toxicity and health hazard information about the ingredients in nearly 65,000 cosmetic and hygiene products. The non-profit organization’s team of toxicologists, chemists and epidemiologists also approves products that it deems free of potentially harmful ingredients to carry an EWG VERIFIED™ mark.

Their efforts have helped to turn phthalate-free products into the fastest growing area of the cosmetics sector. A similar outcry among food shoppers and diners could prompt food manufacturers and fast food companies to remove phthalates from their supply chains.

February 5, 2020
Subscribe To Weekly NYC Food Policy Watch Newsletter
Subscribe to our weekly email newsletter today to receive updates on the latest news, reports and event information
We respect your privacy. Your information is safe and will never be shared.