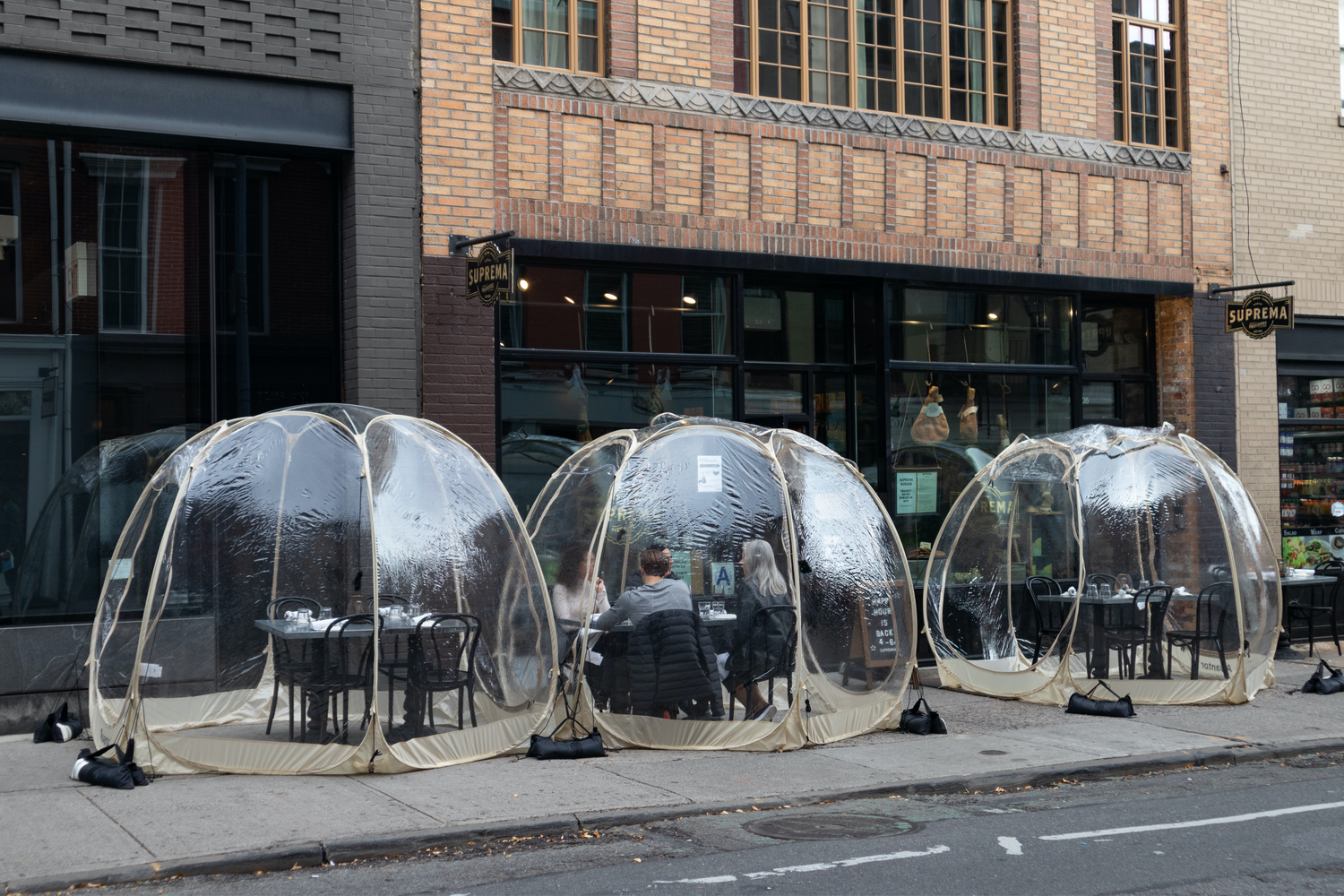 New York issued updated guidelines for indoor and outdoor dining earlier in December, including a ban of indoor dining as of December 14, 2020, until further notice. With temperatures headed towards freezing and no options of indoor dining ahead, restaurant owners are concerned and struggling to keep their doors open, especially with no federal aid in sight.

Current guidelines note that outdoor structures must have airflow from at least two open sides, and the sides are considered “open” if they are covered in any material that restricts air flow, including clear plastic. However, the previous guidelines for outdoor dining did not define how many sides had to be open.

Now, according to Gothamist many restaurants are doing all they can to bring diners in– giving out blankets, using heaters, and enclosing their structures more than current restrictions may allow. Many restaurant owners mentioned that they were unaware  the precautions they were taking did not comply with current regulations; however Gothamist also noted that it is not clear how the indoor dining laws will be enforced among restaurants across the city.

Tom Vilsack, agriculture secretary during Obama’s presidency, has been chosen as President-elect Biden’s incoming agriculture secretary as well. According to Politico, Vilsack’s previous experience was a major factor in the decision to choose him so that he can immediately tackle both the hunger and farm crises underlined by the COVID-19 pandemic. While previously leading the United States Department of Agriculture (USDA),in addition to working on rural development and other nutrition programs, he also oversaw the changes in school nutrition standards spearheaded by then-first lady Michelle Obama. Since leaving his previous term, Vilsack has been leading the United States Dairy Export Council.

His appointment is expected to receive disapproval from small farmers and progressive agriculture advocates are looking for a more aggressive plan to combat climate change and the consolidation of agribusiness. NAACP President Derrick Johnson has voiced his disapproval of the nomination because, since the Civil War, the role has been almost exclusively filled by white men, and Representative Marcia Fudge, another contender, would have been the first black woman and only the second woman to serve in the post.

The USDA is projected to see recovery in the farm section during 2021 with rapid growth, low interest rates, and low inflation, according to the Food & Environment Reporting Network (FERN).

“Like other professions in health care and countless other fields, nutrition and dietetics has for many years experienced underrepresentation by persons of color in its membership and leadership ranks…”

The demographics in the field of nutrition have been highlighted by a New York Times article this month as well as by the ongoing discussion of race and the focus on self-care and nutrition throughout the COVID-19 pandemic. According to the Commission on Dietetic Registration, more than 70 percent of the nation’s registered dietitians are non-Hispanic white, and nearly 84 percent are women.

Many dietitians have started to work towards making their profession a more inclusive profession, noting that the academy’s research, programs, and resources fail to include non-Western cuisines in the options offor healthy meals and ingredients. Calls to action come from dietitians of color as well as those working toward more inclusive training in order to provide for a diverse client-base across the country. The response from the academy regarding professional and educational requirements is expected to be slow, but is crucial for the creation of more inclusive Dietary Guidelines, and providing better nutrition care for all cultures, races, and religions.

Kristen Gradney, a senior director at Our Lady of the Lake Children’s Hospital in Baton Rouge, Louisiana, told the New York Times that, while the academy “has really missed the mark” in teaching dietitians how to work with diverse populations, the organization is starting to make progress. Still, she said, “true change” is more likely to come from grass-roots initiatives like Diversify Dietetics that are working to empower nutrition leaders of color and increase diversity within the field.

Fact Check: How to Make New Year’s Resolutions that Stick

New Year’s resolutions are easy to make when the year ahead feels like a fresh start. But once life gets in the way, it gets harder to keep those resolutions. Research shows that resolutions start off strong, but often carry through only until February, and, overall, only 8 percent of Americans actually fulfill their resolutions.

There’s a tendency we all have to give up as soon as things deviate from expectations. When resolutions don’t work out right away or you’ve let things slide for a few days, here are a few ways to make resolutions that will keep you healthier over time.

November 25, 2015
Subscribe To Weekly NYC Food Policy Watch Newsletter
Subscribe to our weekly email newsletter today to receive updates on the latest news, reports and event information
We respect your privacy. Your information is safe and will never be shared.