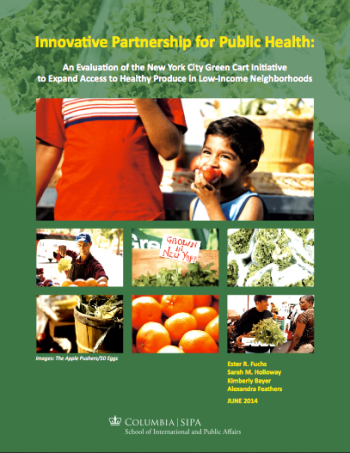 Last week, Columbia University’s School of International and Public Affairs (SIPA) released a report on its study analyzing the NYC Green Cart Initiative, its effects on fresh fruit and vegetable access for low-income New Yorkers, the sustainability of Green Carts as independent businesses and as a case study for how philanthropy can play a role in the support and promotion of innovative public policy.  We highlight below some key findings, by the numbers. Researchers recommend this program be replicated in municipalities nationwide, though they also made recommendations for improving Green Carts.

November 24, 2015
Subscribe To Weekly NYC Food Policy Watch Newsletter
Subscribe to our weekly email newsletter today to receive updates on the latest news, reports and event information
We respect your privacy. Your information is safe and will never be shared.