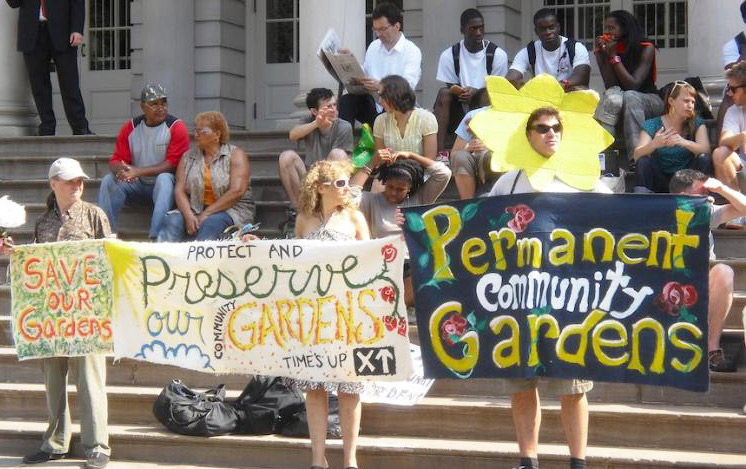 What they do: NYCCGC serves as New York City’s independent voice for community gardens. During World War I and World War II, gardening programs were used as a way to inculcate patriotism and promote gardening as a civilian duty and a way to participate in the war effort. Post-World War II, however, government gardening programs ceased while federal funds became available for urban renewal projects to clear out low-income neighborhoods and begin new development. These urban renewal projects often targeted minority groups, resulting in increased racial segregation, gentrification (the process whereby wealthier individuals move into lower-income neighborhoods, thereby prompting cultural shifts, increases in prices and the displacement of long-standing, lower-income residents) and the disruption of low-income community bonds and social networks. In response, a city program called Operation GreenThumb was launched in 1978 which took legal control over all community gardens by issuing short-term leases to the gardeners and encouraging the creation of new gardens on city-owned lots.

Trouble for the gardens began brewing again in 1998, when Mayor Rudolph W. Giuliani placed all community gardens–more than 700 in total–up for disposition to private interests. More than one hundred community gardens were put up for auction in May 1999. The city’s gardeners couldn’t help feeling singled out, as it was revealed that the city owned some 11,000 empty lots from which to choose for development. A groundswell of greening and gardening groups – including a nascent NYCCGC – coalesced into a force to be reckoned with–demonstrating at City Hall, creating colorful parades, and capturing headlines with passionate protests and acts of nonviolent civil disobedience. NYCCGC and community gardeners city-wide are united behind the precept that if one garden is threatened, all gardens are threatened.

Mission: Founded in 1996, NYCCGC’s mission is to promote the preservation, creation, and empowerment of community gardens through education, advocacy, and grassroots organizing.

Latest project/campaign: The New York State Governor’s Office of Storm Recovery awarded the NYCCGC $500,000 from the Community Development Block Grant – Disaster Recovery. With this grant, they formed Gardens Rising–a community-based environmental project to reduce stormwater flooding on the Lower East Side. The plan will combine community participation with engineering expertise, to develop a green infrastructure study and a master plan to increase stormwater capture within forty-seven (47) neighborhood/community gardens located in the Lower Manhattan NYRCR planning area. The majority of the gardens are located within an area that was severely flooded during Hurricane Sandy, and many were impacted directly by the storm.

Interesting fact about how it is working to positively affect the food system: NYCCGC works with food, environmental and social justice organizations to create a just food delivery system through community engagement.

Number of volunteers: All community gardens are volunteer-driven

Hawaii Becomes the First U.S. State to Ban the Use of Pesticide, Chlorpyrifos

February 2, 2015
Subscribe To Weekly NYC Food Policy Watch Newsletter
Subscribe to our weekly email newsletter today to receive updates on the latest news, reports and event information
We respect your privacy. Your information is safe and will never be shared.