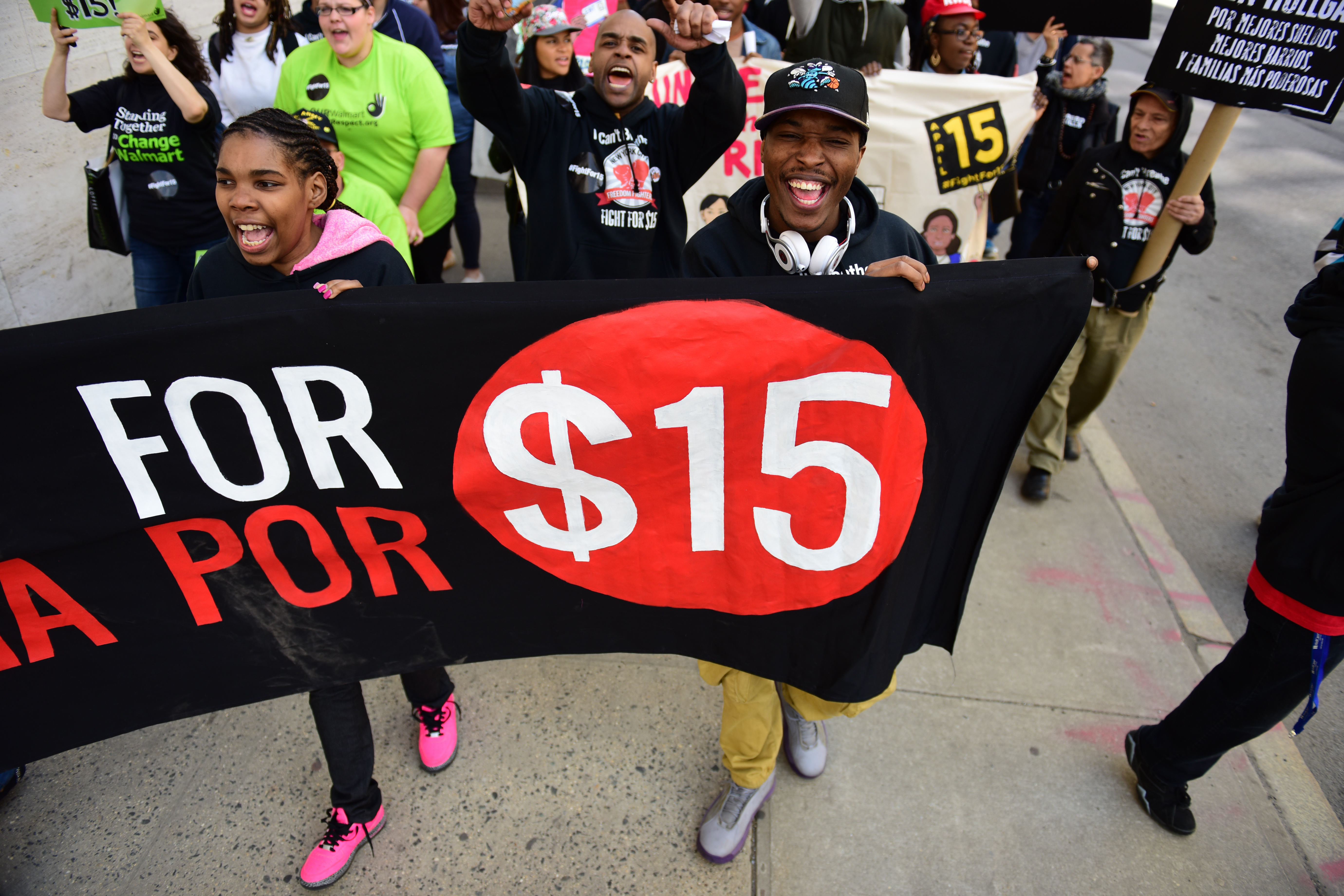 Access to ample and affordable healthy food produced in a sustainable way is at the core of the good food movement. In recent years, and thanks in large part to the organizations highlighted here, the equally important issue of food workers’ rights is increasingly taking its due place in the conversation. These nonprofit organizations are fighting for NY workers, from street cart vendors, to restaurant employees, to factory workers, to farmers. Their on-the-ground efforts and advocacy have led to substantial improvements in wages, working conditions, access to services, and local and federal regulations for workers who often put in long hours for low wages, are the backbone of our food system, and many of whom are immigrants and people of color.

Who They Are: The country’s first nonprofit membership organization for workers in the local food manufacturing industry.

Their Mission: Food-making workers and their allies organizing together for dignified jobs and a just local food system.

What They Do: The Brandworkers community of members and allies are growing an industry-wide base of local food factory workers for dignified jobs and wholesome food. Through leadership development, grassroots advocacy, and coalition-building, Brandworkers helps food-making workers overcome injustice on the job and transform their industry. The organization is pioneering a new form of workplace association centered on the everyday leadership, solidarity, and direct action of front line employees.

Latest Project: Brandworkers is extending its industry-wide standard of dignified jobs with a campaign to achieve a unique workplace agreement at Amy’s Bread, one of New York City’s most prominent bread manufacturers. The organization also recently launched the first leadership development program for women in the local food industry. Finally, Brandworkers is convening workers and aspiring high-road food manufacturing companies with responsible retailers and the good food movement to realize the full economic, public health, and ecological benefits of food produced locally.

Who They Are: A national nonprofit coalition of worker-based organizations whose members work at all levels of the food chain, from planting to selling, who are organizing to improve wages and working conditions
Their Mission: “The Alliance works together to build a more sustainable food system that respects workers’ rights, based on the principles of social, environmental and racial justice, in which everyone has access to healthy and affordable food.”

Directors: Joann Lo and Jose Oliva, co-directors
What They Do: They focus on four areas: (1) Worker leadership development and solidarity: seek ways alliance members can support one another; provide trainings and resources; (2) Policy & standards: work for policies, programs, and standards that protect workers and communities; (3) Campaigns: explore coordinated campaign opportunities among alliance members and ways to act in solidarity with related campaigns; (4) Education & communications: educate the public about the issues.

Latest Project: Currently supporting the Justice for Farmworkers campaign as well as the One Fair Wage campaign, and building a coalition around Good Food Purchasing in New York City for institutions.

Who They Are: A nonprofit coalition of working families in low- and moderate-income communities fighting for social and economic justice throughout New York state

Their Mission: “Through the power-in-numbers approach, NYCC wins REAL change for our towns and neighborhoods. In neighborhood chapters and issue-based committees, we are working to ensure that every family throughout New York has access to quality schools, affordable housing, and good jobs.”

Latest Project: The Fast Food Forward campaign began as a movement of NYC fast food workers to demand a $15 per hour minimum wage and gain rights at work (using the NY-specific #NYFightfor15 hashtag); they’ve since become an international movement of not only fast food workers, but also home health aides, retail workers, child care workers, adjunct professors, and other underpaid workers everywhere (using the universal #Fightfor15 hashtag). In December of 2015, Governor Cuomo announced that the minimum wage for all fast food workers in the city would be raised to $15 by 2018 (by 2021 for the rest of the state).

Who They Are: A membership-based nonprofit dedicated to building the power and voice of restaurant workers, and an affiliate of the national group ROC United

Their Mission: To improve working conditions in the restaurant industry in the NYC area

What They Do: They take a three-pronged approach: (1) Workplace justice campaigns: Support restaurant workers who face workplace injustices by demonstrating public consequences for employers who violate workers’ legal rights; (2) Promote the “high-road”: Collaborate with responsible employers to model how taking the “high road” can actually be profitable and work together to transform the industry; (3) Research and policy: Engage in worker-led participatory and research work to lift standards industry-wide; the research work determines their policy priorities

Latest Project: Through our ONE FAIR WAGE campaign, ROC United advances campaigns in New York State and across the country to pass legislation that will eliminate the tipped minimum wage and require the restaurant industry to pay all its employees at least the regular minimum wage. Learn more at onefairwage.com

Who They Are: A statewide nonprofit located in Poughkeepsie, Lyons, Garden City, and Liberty, NY that works with rural and migrant communities throughout the state to overcome prejudice and poverty

Their Mission: To “work for the creation of a just rural New York State through: nurturing leadership; standing with the disenfranchised, especially farmworkers and rural workers; and changing unjust systems and structures.”

What They Do: They work in three main areas: The Accompaniment Program, to work together with farm workers and other rural workers to improve their working and living conditions, coordinating the   Justice for Farmworkers Campaign for more than 15 years; education to strengthen rural leaders; and youth empowerment, to encourage rural children to create opportunities for themselves
Latest Project: The Justice for Farmworkers Legislative Campaign will be launching its campaign this fall and it will advocate for comprehensive legislation that will bring justice to farmworkers throughout the state of New York as the Farmworker Fair Labor Practices Act is reintroduced in the state legislature in 2017.  The Justice for Farmworkers Action Board (JFAB) will advocate for this bill to their local state legislators as well as the governor’s office. For more information, contact Jose Chapa at josechapajfw@gmail.com.

Who They Are: The Street Vendor Project is a nonprofit membership-based project with more than 2,000 active vendor members who are working together to create a vendors’ movement for permanent change; the Project is part of the Urban Justice Center, a nonprofit that provides legal services and advocacy to marginalized New Yorkers

Their Mission: To “help all people who sell food and merchandise on the streets and sidewalks of New York as they endeavor to support their families, grow their small businesses, and contribute to our city.”

What They Do: Reach out to vendors to teach them about their legal rights and responsibilities, meet with vendors to plan collective actions for getting their voices heard, publish reports and file lawsuits to raise public awareness about vendors, and help vendors grow their businesses by connecting them with small business training and loans

Latest Project: The #LiftTheCaps project lifts the cap on vending permits that have been in place for 35 years, to increase opportunity for vendors and help diversify street food in New York City

Online: Visit their website and check out the Resources page, which reports in-depth on street vendor issues, including some great historical pieces and perspectives from other cities and countries; follow them on Twitter

Who They Are: A membership-based organization focused on building a movement for social and economic justice; located in Syracuse, NY, they are part of a nationwide network of workers’ centers affiliated with the Interfaith Worker Justice of Chicago

Their Mission: To “empower low-wage workers to combat workplace abuses and improve wages and working conditions throughout the community”

Director: They do not have a Director, but have a very active board, one full-time lead organizer, and two part-time organizers

What They Do: They work through community organizing, leadership development, education, and policy advocacy on campaigns to fight for dairy farmworkers rights, to expand access to drivers’ licenses for all New Yorkers regardless of immigration status, to fight wage theft, to train workers on occupational health issues, and to seek immigration reform.
Latest Project: Since 2013 WCCNY members have organized for health and safety at dairy farms in upstate NY. Most recently the firing of two members from one of the area’s biggest dairy farms gave way to a campaign to win the protected right to organize for farmworkers (who are excluded from basic labor rights, e.g., to organize, to overtime pay, and to paid time off). The campaign mobilized a rally at the farm and gathered more than 1000 signatures in a petition directed to the farm’s owners to respect workers’ freedom of association and stop intimidation and harassment. In May 2016, with support and representation of the NY Civil Liberties Union, members of the WCCNY and the Worker Justice Center of New York sued NY state for failure to protect the constitutional right of farmworkers to organize; hours later, the governor responded that he supports their right to organize.

Who They Are: A nonprofit organization that provides legal services and education to low-wage workers, empowers communities, and advocates for institutional change, with offices in Kingston and Rochester

Their Mission: To “pursue justice for those denied human rights with a focus on agricultural and other low-wage workers, through legal representation, community empowerment, and advocacy for institutional change”

Year Started: WJCNY was formed in 2011 through a merger of Farmworker Legal Service of NY (created by the New York State Bar in the late 1970s) and the Workers’ Rights Law Center (founded in 2003)

Is your organization fighting for workers rights? Share the stories of your work in the Comments section.

Episode 2: “Everything’s on the Table”

May 6, 2019
Subscribe To Weekly NYC Food Policy Watch Newsletter
Subscribe to our weekly email newsletter today to receive updates on the latest news, reports and event information
We respect your privacy. Your information is safe and will never be shared.