In the last month, three new reports on hunger and poverty in New York City have been released.  Food Bank for New York City produced The Hunger Cliff One Year Later: 56 million meals lost and the need for emergency food remains high.  The New York City Coalition Against Hunger (NYCCAH) produced The Unkindest Cuts, its 2014 Hunger Report, and the Women’s Center for Education and Career Advancement released Overlooked and Undercounted The Struggle to Make Ends Meet in New York City.  Together the reports paint a devastating and depressing portrait of the life circumstances of our city’s low income populations and the painful consequences of city, state and federal policies that continue to widen the city’s inequality gap.

A few numbers tell the story: 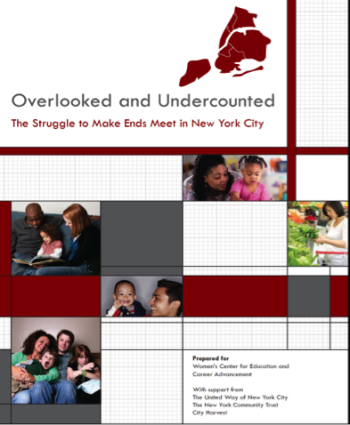 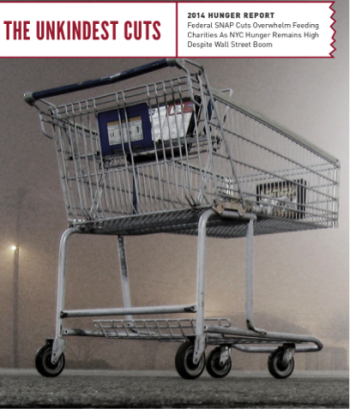 How to make hunger history

Since at least the city’s 1975 fiscal crisis, anti-hunger organizations have been struggling to feed the hungry, educate the affluent, and advocate policies that could reduce hunger in New York City.   These three reports show that despite the heroic and persistent efforts of anti-hunger groups, New York City does not seem to be making much progress in reducing the number or rates of poverty, hunger or food insecurity.  Despite a booming stock market, rising employment and a growing economy, deeper local, national and global trends appear to limit our capacity to respond to these problems, leaving millions of New Yorkers poor and hungry.

To ensure that we are not facing the same or higher levels of hunger and poverty in 10 or 20 years, what questions do we need to ask now?  How can we find the right balance between continuing the necessary work of feeding the hungry and advocating for their needs while also forging the longer-term transformative strategies that will   make poverty and hunger history in New York City?

I suggest six questions that may help to spark the needed deeper analysis:

1.  What would a movement to end poverty and hunger led by poor people look like?  What could we be doing differently now to nurture and grow such a movement?

2.  What issues, framing and strategies could unite the various New York City movements and organizations addressing inequalities in food, health care, education, housing, labor, and employment?  Together these constituencies reach a broad cross-sections of poor New Yorkers but so far they have mostly acted independently.  How can we change that?

3.  How can city government better use its extensive powers and resources related to food—from operating institutional food programs to administering public food benefits—to end hunger?  What would a five or 10 year city plan to end hunger look like?  Who can be the champions of such a goal?

4.  How can food, hunger, health and labor groups spark a re-examination of how we understand poverty?  The Self-Sufficiency Index shows the inadequacy of the federal definition of poverty, especially here in New York City.  What framing and definitions of poverty and inequality can serve to mobilize the broadest coalitions?

5.  How do current alliances between anti-hunger organizations and big food companies affect our ability to create a transformative food justice movement?  How do the alliances of anti-obesity groups with powerful elites affect our capacity to engage poor people?  Are there alternative approaches to such alliances?

6.  How can the 2016 Presidential election year serve as a platform for advancing new ideas on hunger and poverty?  In 2012, income inequality somewhat unexpectedly became a theme for campaign discussion.  What would it take to make the persistence of poverty and hunger a 2016 theme?

For many years, those of us dedicated to reducing hunger and poverty have understandably focused on the short term—this budget cut, that federal renewal of food legislation, or this “least worst” candidate.  The three reports on poverty and hunger in New York City suggest this strategy alone may not help us to achieve our common goals.  Let’s now consider the alternatives.

Testimony on the Status of Hunger in NYC...

Free School Meals for All Students Extended through...

Food for All Uses Tech to Combat...

June 17, 2015
Subscribe To Weekly NYC Food Policy Watch Newsletter
Subscribe to our weekly email newsletter today to receive updates on the latest news, reports and event information
We respect your privacy. Your information is safe and will never be shared.