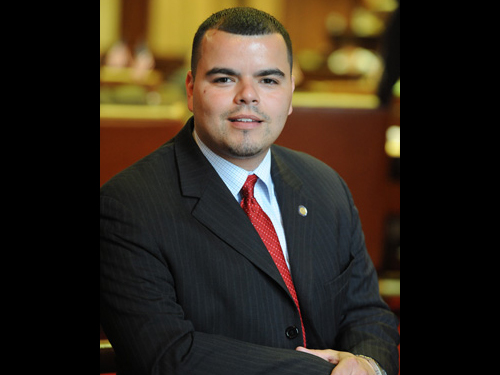 Political Title: Member of the New York State Assembly from the 85th District

What He Cares About: Expanding anti-obesity and wellness programs administered through the Department of Health in order to combat the rising rates of obesity; support farmers and respect immigrant farmers and increase access to healthy and local foods

Recent Food-Related Policies He’s Supported: Since being elected to the New York State Assembly at the age of 28, he has been an advocate for policies that advance a more sustainable and equitable food system in New York City and New York State.

In February 2019, Assemblymember Crespo sponsored the Omnibus Obesity and Respiratory Illness Reduction Act, which is currently under review by the agriculture committee. The purpose of the bill is to establish a comprehensive interdisciplinary  program to combat childhood obesity, which is a rapidly growing public health, social, and economic problem adversely affecting the overall health and wellbeing of the next generation of New Yorkers.

In January of this year, Assemblymember Crespo was one of 24 cosponsors of a bill designed to establish a tax credit for farmers who establish a method of farming and soil management that removes carbon from the atmosphere. The bill, known as the Carbon 2 Farming Act, declares that “soil and vegetation management can significantly enhance soil and carbon sequestration, resulting in a wide range of environmental and agricultural benefits to New York farmers and residents, including: increased yields; soil health; improved water quality; and reductions in greenhouse gases.” This bill is also under review by the agriculture committee.

Assemblymember Crespo’s bill sponsorship record indicates his desire to support not only farmers but consumers as well. In March 2019 he sponsored an amendment to an existing agriculture law that aimed to expand regional farmers’ markets in New York State. in order to help those who struggled to have adequate access to healthy farm-fresh foods. The amendment reads,

Assemblymember Crespo also works to protect the rights of and promote humane working conditions for the thousands of immigrant farmworkers in New York state. In a joint statement with Jeff Williams, Director of Public Policy for the New York Farm Bureau, he called for more respect for farm workers during a time of heightened anti-immigrant sentiments.

“Farmers and farmworkers remain the hardest working segment of our economy due to the labor-intensive nature of agriculture production. No other Americans and laborers in any other sector of our economy are confronted daily with the strenuous demands of this industry. Yet the anti-immigrant sentiments so pronounced today are tormenting the labor that is so vital to our rural communities and our state.”

He is a member of the following committees: Transportation; Cities; Energy; Black, Puerto Rican, Hispanic and Asian Legislative Caucus; and Puerto Rican/Hispanic Task Force. He also chairs the Committee on Labor.

September 17, 2014
Subscribe To Weekly NYC Food Policy Watch Newsletter
Subscribe to our weekly email newsletter today to receive updates on the latest news, reports and event information
We respect your privacy. Your information is safe and will never be shared.