Are Aquaponics a Sustainable Alternative to Conventional Agriculture Methods in New York City? 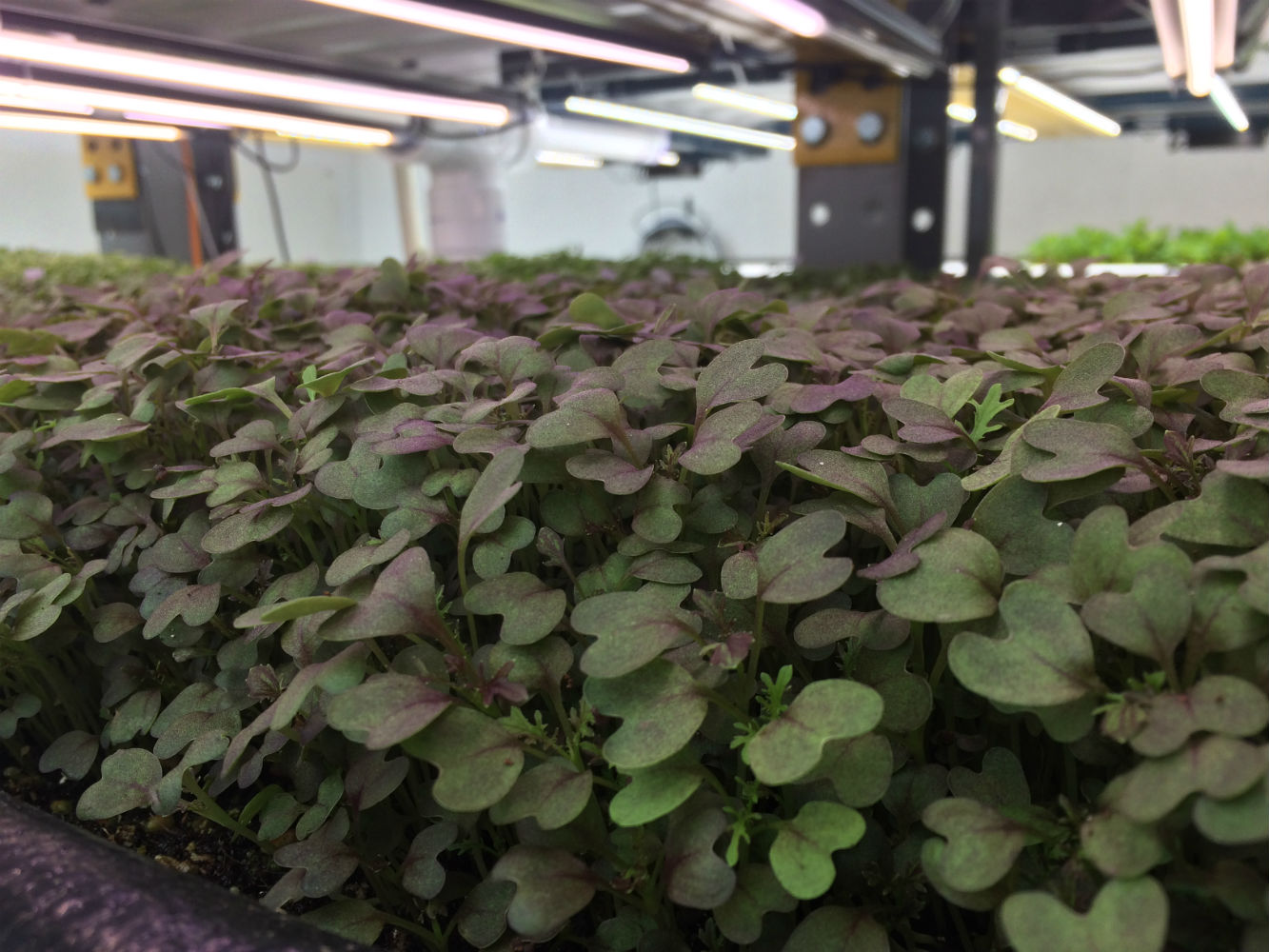 According to the New York City Hunger Report, New York State and New York City hunger and food insecurity levels in 2015 were virtually the same as they were at the height of 2008’s recession. Three million people statewide and 1.4 million people citywide live in households that without reliable access to affordable, nutritious food. Activists are looking towards innovative alternatives to conventional models of agriculture, which, of course, require a great deal of land. In urban areas, where poverty is typically high and space scarce, is booming. The U.N. Food and Agriculture Organization (FAO) estimates that 15 to 20 percent of the world’s food is now being produced in cities. While there are more than six hundred community gardens, thousands of backyard gardens, a growing number of school gardens, two large commercial green roofs, and more than a dozen small farms in New York City, the high price and scarcity of land, in particular, is one of the biggest issues with the development of urban agriculture. However, some innovators have discovered a growing system that can be set up in virtually any environment or rooftop, without soil—aquaponics.

What is aquaponic farming?

Aquaponics systems offer a sustainable method of urban growing, combining hydroponics, or soilless growing, with aquaculture, or raising fish. In its most basic form, it consists of a soilless grow bed, a fish tank, and a pump to move water between the two—it generates no waste and creates its own fertilizer.

This is done by forming a symbiotic relationship between the fish and plants. Fish produce waste in the water, which is filtered and pumped through the plants. Filters convert fish waste into fertilizer by breaking them down into nitrates, or nutrients. After the plants absorb the nutrients in the water, it is filtered back into the fish tank for reuse. Through this process, the system inherently recycles water—the average aquaponic system loses only one to three percent of its total water volume per day to evaporation.

Unlike in traditional farming methods, plants in an aquaponics system don’t need to expend energy to send roots searching for nutrients in soil—they receive a constant source of nutrients through the water supply. Because the farmer is able to closely monitor and maintain optimal growing conditions for the plants, they grow quicker, larger, and with a 20 to 25 percent higher yield compared to traditional growing methods.

This can be done in a wide variety of ways, whether it’s small-scale, large-scale, vertical, horizontal, or stacked. In fact, the system works in the favor of designing aquaponics vertically, letting gravity drain water from plants to fish—and saving tons of space. In New York City, with an estimated billion square feet of rooftop, there seems to be enormous potential.

Edenworks, an aquaponic farm in East Williamsburg, expects to produce around 150,000 pounds of leafy greens in a 12,000-square-foot space. For reference, Brooklyn Grange, the world’s largest rooftop soil farm operating on two rooftops in Brooklyn, grows about 50,000 pounds of produce in a total of 108,000 square feet. That’s 70 percent more produce in about five percent of the space.

In theory, a well-protected aquaponics system, though an integrated fertilizing system, is significantly safer from common food-borne bacteria than traditional farming methods. E. coli or Salmonella, for example, originate in warm-blooded animals, not fish. Without using soil, aquaponics systems have clearly defined input and output, easily protected against potential contaminants that fish may ingest and pass on to the produce.

However, because aquaponics is a relatively new practice, food safety procedures and proper cultivation methods aren’t clearly defined. The Food Safety Modernization Act, a national food safety reform which President Obama signed into law in 2011, doesn’t define standards for aquaponics practice, leaving much up to the interpretation of the aquaponic farmer.

Can it be used for large-scale productions?

Aquaponic farms require a great deal of energy to run. With a high initial setup cost of tubing, pumps, beds, and (for commercial productions) a greenhouse, there is also a high electrical cost to run the pump and maintain the system.

Because of the inherent cost, it has largely been utilized as a hobby or luxury—not for profit or nourishment for a community. For example, Ouroboros Farms, a commercial aquaponic farm in Half Moon Bay, California, is a high-end business; founder Ken Armstrong spent a quarter of a million dollars building the system and only began to profit after three years. He personally delivers his orders to his small number of upscale clients in the Bay Area, via his Tesla.

Drought-stricken California, in particular, has taken notice of the potential water conservation in aquaponics, but public interest is growing on a national scale. Armstrong State University, for example, is researching ways to make this system more energy efficient and profitable in order to drive more people towards this sustainable ways of cultivating local food. An Aquaponics Association was formed in 2011 to promote the benefits of this way of growing through outreach and education.

Here in New York City, aquaponics operations have been making their way into urban agriculture initiatives, education projects, rooftop greenhouses, and kitchen herb gardens throughout the city. Though improved efficiency and reduced cost is needed before not-for-profit organizations can utilize aquaponics to help feed New York City’s hungry, the groundwork is being set for this to become a strong sector of urban agriculture in NYC.

The New York City Food Policy Center at Hunter College is excited to highlight four aquaponics ventures in NYC, as well as one resource for making your own sustainable growing system at home.

Location: While commercial operations in NYC are still limited, anyone can start an aquaponics system at home, in the kitchen or on a rooftop.

Size: Anywhere from ten gallons to more than 100 gallons, the systems available to the DIY aquaponics enthusiast are varied and offer a lot of choice. The AquaSprouts system fits on any standard sized 10-gallon fish tank, and the slightly larger Grove Ecosystem created by MIT engineers, with its automated grow lights and customizable settings, uses a 25-gallon tank to supply water and nutrients to 305 square inches of grow space.

What they are doing: Both of the above options are meant to be used with ornamental (e.g. pet) fish. Those hoping to also breed fish for food should check out the advice offered by Aquaponics NYC on their YouTube channel.

Location: This Bushwick manufacturing facility doesn’t look like much on the outside, but on the rooftop of the industrial complex, rows upon rows of fresh produce are growing.

Size: The garden grows in stacked trays, five on top of one another, that cover approximately 800 square feet of building space. The gardens are fed by a 250-gallon tilapia tank. An upcoming move to Long Island City, Queens, will put them in a 9,000-square-foot facility with room to grow.

What they are doing: Edenworks founders estimate that with a 75,000-square-foot operation, they could provide enough food to permanently sustain approximately 5,000 people. They have tested more than 50 crops, including tomato, basil, kale, radish, chard, and arugula. Currently, they provide produce and fish to a number of restaurants in the NYC area and will soon have products available for sale in Whole Foods Markets. In addition to the Edenworks facility, the founders help other organizations to get their own projects up and running.

Location: Another Bushwick project, this operation is currently the largest outdoor aquaponics setup in all of New York City. Founders Yemi Amu and Jonathan Boe built the project in a vacant lot, two doors down from the Moore Street Market, with help from GreenThumb, the Brooklyn Economic Development Corporation, and the Awesome Foundation.

What they are doing: Growing some of their own feed—duckweed—on site, Oko Farms raises edible tilapia, ornamental goldfish, and koi. The fish fertilize gardens which grow a wide variety of edible herbs and vegetables, as well as flowers. Unlike many other commercial operations, Oko Farms sells their produce directly from the farm, in addition to supplying local restaurants. While they aren’t currently producing fish for sale, they do throw a community fish dinner.

Location: The Lt. Joseph P Kennedy Community Center in Harlem, which offers a range of cultural events and educational opportunities in the neighborhood, is home to this agricultural project and science lab.

What they are doing: This garden, sponsored by Aquaponics NYC, The Koru Collaborative, Harlem Seeds, and The Kennedy Center, is both a community food resource and a teaching tool designed to get kids interested in and passionate about sustainability, food production, and environmental sciences. Watch the video series about the project by Aquaponics NYC.

Location: This vertical garden operation is built atop an old Pfizer manufacturing plant in Bushwick, Brooklyn. As part of their dedication to sustainability, Verticulture produces their own plant and insect feed for the fish.

Size: Currently, Verticulture uses 450 square feet of growing space, with 350 square feet for fish tanks, which houses some 240 tilapia. They are expanding by 2017 to a 2500-square-foot rooftop operation. The goal is to reach 10,000 square feet, through which they believe they can produce 100,000 pounds of greens and 15,000 pounds of fish annually.

What they are doing: After a successful IndieGogo campaign in 2014 to raise the $10,000 capital required to start production, cofounders Ryan Morningstar, Miles Crettien, and Peter Spartos are now producing tilapia along with produce, particularly fresh greens like basil, arugula, and kale. They sell their fish and produce in stores around NYC and produce custom herb and vegetable blends for chefs at NYC restaurants.

How the USDA is Working to Reduce SNAP Fraud