Overview: The City Of Melbourne developed a stoplight system to classify foods based on nutritional content, with the goal of improving the range and access to nutritious food. Food outlets like recreation and leisure centres, premier events, and vending machines classify and label foods based on their nutritional value. Green foods are the best choices, amber foods are adequate, and red foods should be avoided. In March of 2012, the city expanded GLER to the Moomba Festival – a family festival held annually to celebrate the city.

As part of the “Food City – Healthy Choices For All’’ policy, a strategic document that redesigned food access in Melbourne, the city developed a food classification program based on a traffic light system of colour coding: 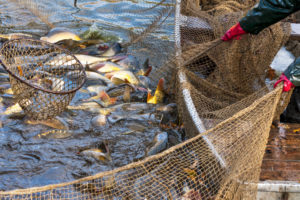 By Michelle Polizzi What does the “Atlantic” in “Atlantic salmon” suggest? Consumers might be surprised to learn...
Copyright © 2019-20 Hunter College New York City Food Policy Center. All Rights Reserved.
Back to top
Subscribe To Weekly NYC Food Policy Watch Newsletter
Subscribe to our weekly email newsletter today to receive updates on the latest news, reports and event information
We respect your privacy. Your information is safe and will never be shared.