The Status of Street Vendors in NYC: Background and Overview 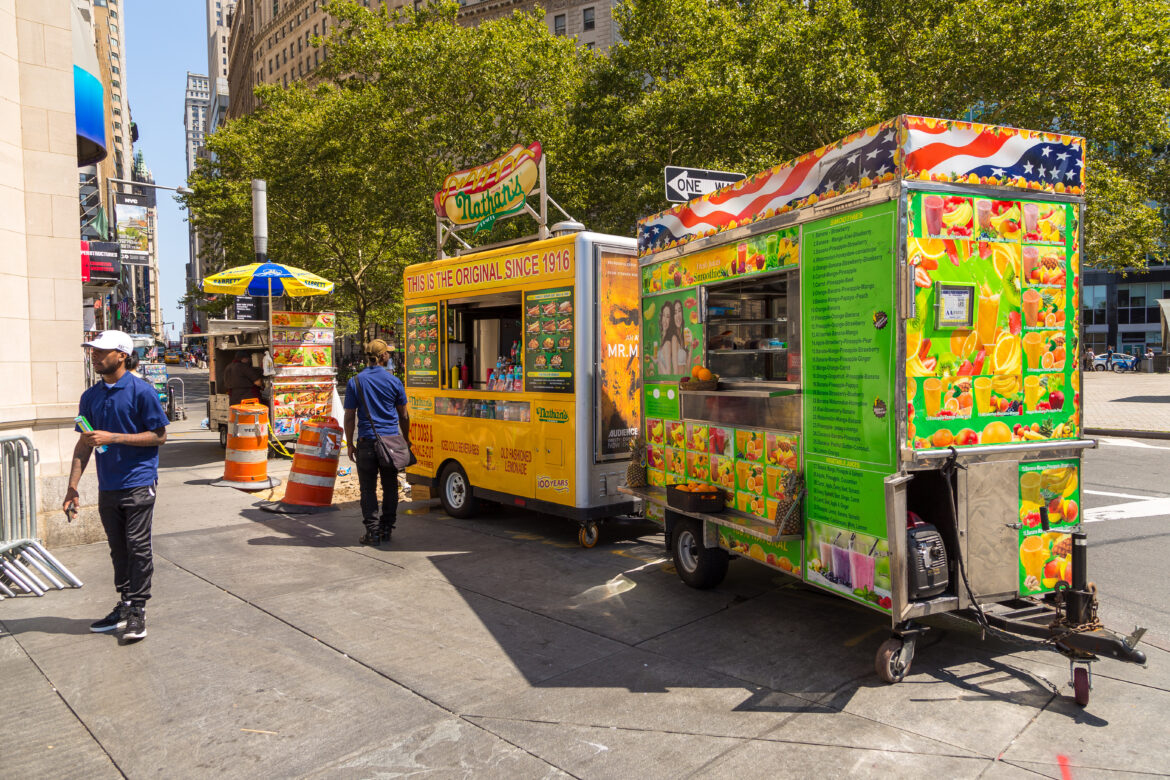 On Friday, April 29, a fruit vendor was arrested for selling food without a permit at the Broadway Junction subway station in Brooklyn. The incident prompted condemnation from advocates for street vendors, who argued that the police officers’ handling of the arrest, including confiscating the vendor’s merchandise and making her take off some of her clothes in order to be searched, was cruel and unnecessary.

Mayor Eric Adams supported the arrest but noted that the NYPD would “evaluate” the incident. The arrest is part of a larger effort by the Adams administration to enforce transit rules after a lull in enforcement caused by the pandemic. In January 2021, former Mayor Bill de Blasio assigned the city’s Department of Consumer and Worker Protection the responsibility for enforcing vendor rules, a job previously held by the NYPD. However, even with this change in responsibility, the NYPD has not discontinued issuing tickets and tickets for street vendors have increased significantly over the past year.

Selling wares – including food, art, flowers, clothing, and more – on the streets of New York City is not illegal  but requires a vending license and cart permit, depending on what is being sold. A 1941 Local Law attempted to restrict street vending (“peddling”), but in 1943 a ruling in the case of the Good Humor Corp. v. City of New York (290 N.Y. 312) found  the Local Law to be invalid because the court determined that the city did not have constitutional power to protect brick-and-mortar storekeepers from the competition of street vendors.

While there is no limit on the number of Mobile Food Vending Licenses, City law limits the number of Mobile Food Vending Permits issued to food trucks and carts, leading to long waitlists (which have been closed for more than a decade) and an underground black market for permits. Some vendors have paid as much as $20,000 to illegally sublease a permit from its owner.

In 2021, the City Council passed a bill that, beginning in July 2022, will “[expand] the availability of food vendor permits, [create] an office of street vendor enforcement, and [establish] a street vendor advisory board.” For the next ten years the number of food street vending permits will be increased by 445 each until 2032. This will ultimately double the total number available today. In addition, in 2018 State Senator Jessica Ramos introduced Senate Bill S1175, still under consideration by the New York State Senate Cities 1 Committee, which would increase the number of street vendor permits issued in cities with one million residents or more. (New York City is the only city in New York State with more than one million residents). For cities meeting that criterion (effectively NYC), the bill would:

…require local governments to create a fair and equitable street vending license program. Municipalities will be forbidden from restricting or capping the amount of street vendor licenses. Also, local legislatures would be limited in their ability to ban vendors from parks and to deny vendors’ chosen location of operation. Lastly, this legislation will vacate street vendors’ records from past citations and misdemeanors related to sidewalk vending.

Furthermore, the bill would forbid municipalities from “restricting or capping the amount of street vendor licenses,” which would effectively allow the city to issue an unlimited number of street food vending permits, eliminating the practice of leasing permits on the black market.

It is important to note that although Green Cart operators are technically considered street food vendors/mobile food vendors, Green Cart permits are different from those of other types of street food vendors. The Green Cart program is designed to make healthy food more accessible to communities that otherwise have little access to fresh fruits and vegetables. Therefore, Green Cart vendors are only allowed to sell food in specific neighborhoods/areas designated by the city, and Green Carts are only permitted to sell fruits and vegetables (either whole or cut/sliced), bottled water, and plain nuts. Many of these vendors have also received technical assistance to use equipment to accept SNAP/EBT from a food service consulting firm supported by the USDA and the New York State Farmers Market Federation.

The Green Cart Initiative was initially launched by a partnership of the Department of Health and Mental Hygiene, the Mayor’s Fund to Advance New York City, and the Laurie M. Tisch Illumination Fund. There are 1,000 Green Cart permits available each year, and the currently operating Green Carts are spread across all five boroughs.

However, not all members of the community are supportive of relaxing the rules or increasing the number of street vendors. street vending. During the 2021 mayoral campaign, candidate Andrew Yang posted a Tweet supporting of stronger enforcement of rules against street vendors who do not have permits. The statement drew backlash from the community and from Yang’s mayoral opponents, many of whom said that unlicensed street vendors are not a top-line issue for New Yorkers. However, many small businesses, including restaurants, grocers, and bodegas, view street food vendors as competition, and vocally opposed the 2021 bill expanding the number of permits.

A common concern that also emerges in conversations about street food vending is the issue of food safety. In recognition of that concern, individuals operating mobile food vending units (i.e., carts and trucks) are required to complete the Food Protection Course for Mobile Vendors “to ensure the safety of the food served in New York City’s mobile food carts and trucks.” The course is similar to the Food Protection Course offered to other individuals who handle food in NYC but is modified to address the practices unique to food trucks and carts. Food trucks and carts are also subject to inspection by the Department of Health and Mental Hygiene, and receive letter grades similar to those given to restaurants. However, while the units themselves are typically food-safe, concerns have been raised about the cleanliness of the commissaries where the units are stored when not in use.

Brick-and-mortar business owners have also opposed street vendors’ relative lack of overhead costs. Food trucks and carts do not have to pay rent or real estate taxes to operate on most city sidewalks, although some street food vendors operating on land managed by the Parks Department do have expensive contracts in place.

After the April 29th incident, some journalists and advocates compared it to the 2019 arrests of two churro vendors, one also at the Broadway Junction station and the other at the Myrtle/Wyckoff station.

Many of the rules and regulations for street vendors are complicated and difficult to understand, so many of these advocacy groups also work to inform street vendors (many of whom are immigrants) about their legal rights and responsibilities. In 2009, the Street Vendor Project and the Center for Urban Pedagogy created a special issue of Making Policy Public (The Center for Urban Pedagogy’s informational poster series) titled Vendor Power! that “decode[s] the rules and regulations for New York’s 10,000 street vendors so they can understand their rights and avoid unnecessary fines.”

What the Tweets are Saying

Chilis on Wheels: Plant Based Activism and Community Development

Pie in the Sky: Half-Baked Ideas That...

May 29, 2017
Subscribe To Weekly NYC Food Policy Watch Newsletter
Subscribe to our weekly email newsletter today to receive updates on the latest news, reports and event information
We respect your privacy. Your information is safe and will never be shared.