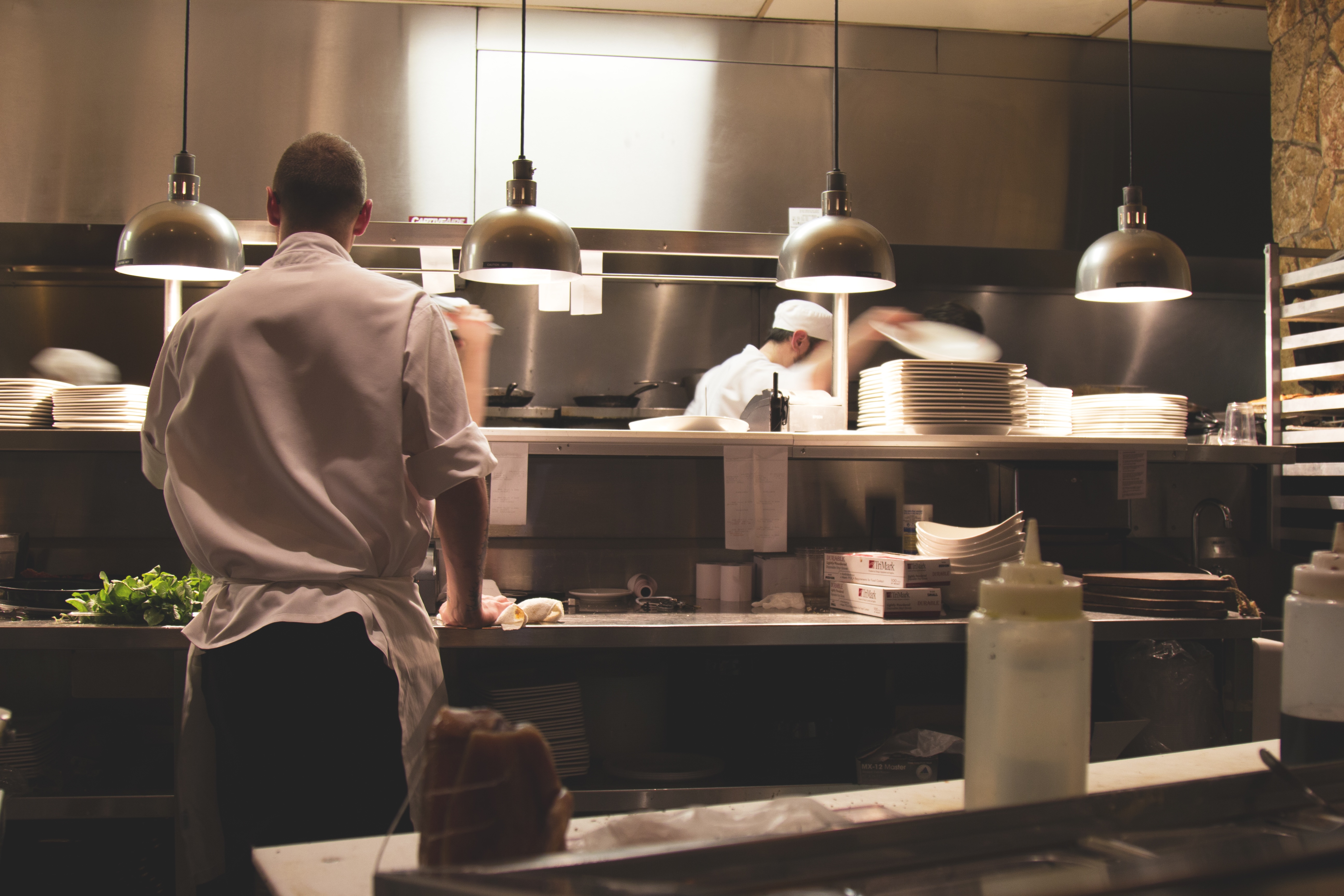 By Lauren Haupt and Alexina Cather

Chefs around the world are playing a unique part in improving the food system, making it more sustainable, socially just, and nutritious. They are working on a number of food system issues including ending child hunger and childhood obesity, banning antibiotic use in livestock, and connecting their communities to local, sustainably produced food.

The New York City Food Policy Center is excited to highlight the work of 13 chefs in NYC who are using their roles as chefs to inspire change in the food system.

Name: Dan Barber
Restaurant: Blue Hill
Website: https://www.bluehillfarm.com/team/dan-barber
Training: International Culinary Center (formerly known as French Culinary Institute, NYC)
Food: Farm Inspired Cuisine
Where you can find him in NYC: Blue Hill
What he is doing: Dan Barber is the author of The Third Plate. His opinions on food and agricultural policy have appeared in the New York Times, along with many other publications. Appointed by President Barack Obama to serve on the President’s Council on Physical Fitness, Sports and Nutrition, Dan continues the work that he began as a member of Stone Barns Center for Food and Agriculture’s board of directors: to blur the line between the dining experience and the educational, bringing the principles of good farming directly to the table. Barber has received multiple James Beard awards including Best Chef: New York City (2006) and the country’s Outstanding Chef (2009). In 2009 he was named one of Time magazine’s 100 most influential people in the world.

Name: Floyd Cardoz
Restaurant: Paowalla
Website: http://floydcardoz.com/restaurants/
Training: Culinary School in Bombay, India and Switzerland, along with apprenticeships
Food: Modern Indian Cuisine
Where you can find him in NYC: Chef/Owner of Paowalla, set to late summer 2016 in SoHo.  Formerly of Tabla and North End Grill.
What he is doing: Cardoz is involved with a number of organizations including Share our Strength’s No Kid Hungry campaign, Juvenile Diabetes Foundation, and The Young Scientist Foundation.

Name: David Chang
Restaurant: Momofuku
Website: https://momofuku.com
Training: International Culinary Center
Food: Modern American
Where you can find him in NYC: Chef/Owner of Momofuku Noodle Bar, Ssäm Bar, Ko, Má Pêche, Nishi, Fuku, Ando, Booker and Dax
What he is doing: Chang is a member of the Benefit Committee for the Food Bank of New York City, a Food Council Member for City Harvest, and a member of the Board of Directors for Friends of Hudson River Park.

Name: Tom Colicchio
Restaurant: Crafted Hospitality Group
Website: http://www.craftrestaurantsinc.com/team-member/tom-colicchio/
Training: Self-trained
Food: Seasonal New American
Where you can find him in NYC: Chef/Owner Craft, Craftbar, Colicchio and Sons, Riverpark, ‘wichcraft
What he is doing: Colicchio appears in and served as executive producer on A Place at the Table, Participant Media’s documentary about food insecurity in America. He co-founded Food Policy Action in 2012 in collaboration with national food policy leaders to hold legislators accountable on votes that have an effect on food and farming. Colicchio also speaks on issues like GMO labeling and the use of antibiotics in food sources, and lobbies for better anti-hunger policies in America.
Colicchio serves on the boards of Children of Bellevue, City Harvest, Wholesome Wave and Food Policy Action.

Name: Marc Forgione
Restaurant: Marc Forgione
Website: http://chefmarcforgione.com/
Training: Culinary apprenticeships in NYC and France
Food: Seasonal New American
Where you can find him in NYC: Chef/Owner Restaurant Marc Forgione
What he is doing: Forgione is a Chef Ambassador for Family Reach Foundation, Chefs for Kids Cancer, City Harvest, and Feeding America, and participates in numerous events each year for these organizations.  He says, “There are a lot of people in this world who, unfortunately, got dealt a crappy hand and I have been blessed to not be one of those. So, anything I can do to help make someone smile, count me in.”

Name: Joseph “JJ”Johnson
Restaurant: The Cecil
Website: http://www.thececilharlem.com/
Training: Culinary Institute of America
Food: Afro-Asian-American Cooking
Where you can find him in NYC: In 2013, Johnson helped open The Cecil with Richard Parsons and Alexander Smalls. He has since joined the kitchen of its sister restaurant Minton’s, the revived jazz supper club located next door.
What he is doing: Each week, Johnson’s kitchen provides a menu-inspired lunch to 89 low-income tenants of the SRO situated above The Cecil on West 118th Street. “We take care of them and they take care of us,” he says.
Johnson mentors six students from New Heights Academy Charter School at Amsterdam Avenue and 150th Street, who visit his kitchen weekly for training to help them get into culinary school. He is involved with the James Beard Foundation’s effort to turn under 40-year-olds onto good food and nutrition through assorted events. Johnson also supports Share Our Strength’s No Kid Hungry campaign, lobbying on behalf of Mayor Bill de Blasio’s campaign to increase access to free school breakfasts in public schools.

Johnson envisions a day when no city kid is hungry outside of school, calculating that if he put “one restaurant in each borough and fed 20 families a day during the summertime, that would be 100 kids. Then other restaurants would do it, and we’d make a difference.”

Name: Liz Neumark
Restaurant: Great Performances Catering
Website: http://www.greatperformances.com/our-story
Training: Self-Taught Chef
Food: Seasonal, Local
Where you can find her in NYC: Owner/Operator Great Performances, Katchkie Farm, The Sylvia Center
What she is doing: In 2007, Great Performances became the first catering company to own a farm (organic and sustainable), Katchkie Farm. Along with her husband, Chaim Wachsberger, Neumark also launched The Sylvia Center in 2007, an educational nonprofit for children. In 2013, she published Sylvia’s Table, an inspirational cookbook to encourage families to cook wholesome meals together.

Additionally, Neumark sits on the boards of GrowNYC, Just Food, The New York Women’s Forum and the Governor’s Council for Food Policy. She has been honored with the Food Arts Silver Spoon Award, Crain’s 100 Most Influential Women, and Ernst & Young New York Entrepreneur of the Year Award. Neumark blogs about food politics for The Huffington Post and Straus Publications.

Name: Eric Ripert
Restaurant: Le Bernardin
Website: https://www.le-bernardin.com/
Training: Culinary school in Perpignan, France
Food: Modern French Cuisine with a focus on seafood
Where you can find him in NYC: Chef/Co-Owner of Le Bernardin
What he is doing: Ripert is the Vice Chairman of the board of City Harvest, which aims to help fight hunger through donations and fundraising.

Name: Marcus Samuelsson
Restaurant: Samuelsson Group
Website: http://www.marcussamuelsson.com/
Training: Culinary Institute in Gothenburg, Sweden and apprenticeships
Food: Internationally inspired, fresh and local
Where you can find him in NYC: Chef/Owner Red Rooster Harlem, Ginny’s Social Club, Streetbird Rotisserie, Uptown Brasserie, American Table
What he is doing: Samuelsson and his wife Maya Gate Haile started the Three Goats Organization; a New York based non-profit organization dedicated to improving the health and well being of children, young women, and families in Ethiopia by providing sustainable access to vital resources, such as food and water.

Samuelsson is a long-time supporter, and now Co-Chair, of an organization close to his heart, the Careers through Culinary Arts Program (C-CAP), which promotes and provides career opportunities in the foodservice industry for under-served youth through culinary arts education and employment.

He has been a UNICEF Ambassador since 2000 and is particularly committed to supporting UNICEF’s water and sanitation programs. Additionally Samuelsson is involved with City Harvest, Storefront Academy, and Harlem Children’s Zone.

Name: Bill Telepan
Restaurant: Telepan (closed in May 15th, 2016)
Website: http://www.wellnessintheschools.org/index.php/home/leadership
Training: Culinary Institute of America
Food: Greenmarket cooking
Where you can find him in NYC: Executive Chef Wellness in the Schools
What he is doing: Since 2008, Telepan has been the Executive Chef of Wellness in the Schools (WITS) where he works with WITS in Residence Cooks to make school food healthier and more delicious.  As the first chef involved with WITS, he has spearheaded its goals by developing nutritious school menus, training cafeteria workers, and teaching culinary and nutrition concepts to students, parents and teachers. Telepan’s daughter inspired him to join WITS and make healthy school food a cause that he holds close to his heart.

As part of his work with WITS, Telepan was selected to First Lady Michelle Obama’s initial Taskforce to launch the Chef’s Move to Schools initiative in 2009.

Name: Matthew Weingarten
Restaurant: Dig Inn
Website: https://www.diginn.com
Training: Institute of Culinary Education
Food: Seasonal, Sustainable
Where you can find him in NYC: Weingarten began his career in fine dining restaurants, like Savoy, and went on to bring local and sustainable food sourcing to Sodexo, where he sought to realize his vision of making large-scale industry change. In 2015, Weingarten joined Dig Inn as the Culinary Director where he joyfully combines his passion and knowledge to cook up delicious, seasonal food that is accessible for all.
What he is doing: Weingarten has received acclaim for “some of the city’s finest Greenmarket cooking” from Time Out New York and food that is “thoughtful, well executed” from New York Magazine. In 2010, Weingarten was inducted into The Institute of Culinary Education’s Alumni Hall of Achievement and is a member of its national curriculum advisory board. In 2014 Weingarten was appointed as the National Board Chair for Chefs Collaborative, a nonprofit organization dedicated to making sustainable practices second nature for every chef in America. Matt is also the co-author of Preserving Wild Foods: A Modern Forager’s Recipes for Curing, Canning, Smoking, and Pickling.

December 5, 2016
Subscribe To Weekly NYC Food Policy Watch Newsletter
Subscribe to our weekly email newsletter today to receive updates on the latest news, reports and event information
We respect your privacy. Your information is safe and will never be shared.