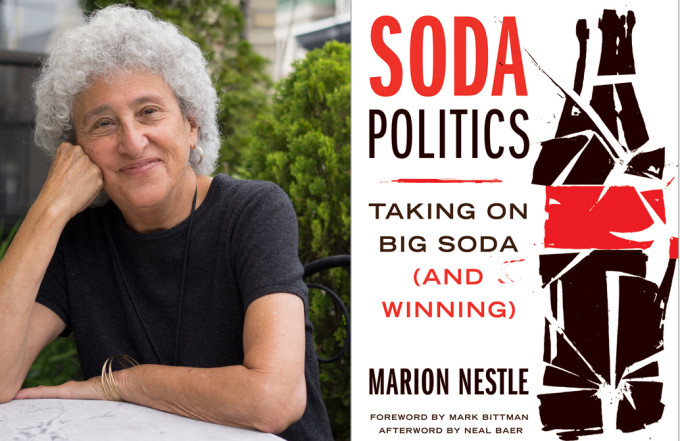 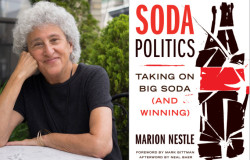 Marion Nestle recently published her new book, Soda Politics: Taking on Big Soda (and Winning). She is Paulette Goddard Professor in the Department of Nutrition Food Studies and Public Health at New York University. Nestle is speaking about Soda Politics at our Food Policy For Breakfast session on December 14th and her book was recently reviewed in the New York Times. The Food Policy Center’s Nick Freudenberg asked Professor Nestle some questions about her new book.

NF: Your new book “Soda Politics: Taking on Big Soda (and winning)” describes some of the ways the soda industry, “protects sales and profits at the expense of public health.”  What made you decide to write a book about this?

MN: Three years ago or so, I was talking to Sara Thaves, who runs the Cartoonist Group, about doing a book using cartoons from its members as illustrations for a beginners’ guide to food politics. While I was working with my then agent about getting that project together, she and another of her clients talked to me about doing something on sodas as a way of talking about food advocacy. I thought that was one terrific idea and mentioned it to the editor at Rodale Books who was interested in the cartoon book. She said she’d take both. Rodale published Eat, Drink, Vote: An Illustrated Guide to Food Politics in 2013. But when the editor I was working with moved on, my agent got the book transferred to Oxford University Press.

I go through all this because Oxford got to consider a complete first draft. By that time, I knew that sodas were fabulous to write about. The industry has a hundred-year, extraordinarily well documented history, and stands for any other industry making a product that isn’t good for health, especially in large amounts. It also has the most amazingly comprehensive program of marketing, community engagement, corporate social responsibility, lobbying, and use of the political system. People love their Cokes and Pepsis and brand loyalty is intense. Even so, advocates are making headway—soda sales have declined by 20% to 25% in the last ten years, largely as a result of public health advocacy efforts. I teach food policy, politics, and advocacy and I knew I’d have plenty to write about. And I could use sodas to talk about larger issues related to food movements and advocacy—the part standing for the whole.

NF: You’ve spent many years studying the food industry and its business and political practices.  Did anything you learned about the soda industry surprise you? If so, in what ways?

MN: The big surprise is the comprehensiveness of soda company efforts to market and protect sales. When I started the research, I had file boxes full of folders on such matters as advertising expenditures but also marketing to children, minority groups, and countries throughout the world; use of celebrities and sports figures; use of social responsibility for cleaning up the environmental messes; funding of community organizations; efforts to keep sodas in schools; and funding of researchers and educational institutions. I had no idea how vast was the scope of these efforts.

The other big surprise was the complexity. I ended up thinking that soda companies were schizophrenic, Dr. Jekyll and Mr. Hyde. On the one hand, they exhibit the public Dr. Jekyll—all about friendship, family values, love, and happiness. This is the part of the companies that wants to do right by public health and the environment, the part that makes healthier drinks, markets small sizes, and funds community exercise and recycling programs.   But then there’s Mr. Hyde—the part that sets the strategy behind those efforts, lobbies, lets the American Beverage Association to the dirty work for them, and spends fortunes opposing public health efforts. The public sees Dr. Jekyll. The Mr. Hyde part isn’t so pleasant.

NF: In your book, you talk about some of the big challenges the soda industry faces today.  What do you think are Big Soda’s greatest vulnerabilities?

MN: Coke and Pepsi are long-standing, now iconic companies with hordes of customers accustomed to drinking their products in large amounts and willing to take to the streets to defend their right to drink their favorite brands. But obesity has thrown a monkey wrench into that picture and has become the industry’s Achilles Heel. The problem, of course, is sugars. The plural is for glucose and fructose, both coming from either cane or beet sugar or cornstarch in roughly equivalent amounts. It’s not that sodas have sugar or high fructose corn syrup; it’s that they have so much of the mix of glucose and fructose. I finally learned to remember how much–5/6 teaspoon per ounce, or 10 teaspoons of sugars (plural) in a 12-ounce soda. With all the public pressure on sugars these days, sodas are in trouble. They account for a full third of sugars in U.S. diets

NF: You also write about many of the activist campaigns to reduce soda consumption and limit the industry’s license to promote products associate with premature death and preventable illnesses.  What do you think are the most promising strategies?

MN: It doesn’t seem to matter what the strategy is or whether they win or lose. They all get the word out that drinking sugars is not a good idea. I’m impressed by the 76% majority vote in Berkeley, CA for a soda tax. Berkeley did advocacy by the book; it did everything right. Because it framed the campaign as Berkeley against Big Soda, the soda companies were stymied whenever they advertised or campaigned against the tax. Everyone could see that this was Big Soda in action. Berkeley also tied the tax to funding child health programs and campaigned in every neighborhood, rich and poor, minority and not, making the issue one that affected everyone. Mexico, a country with the highest soda consumption and obesity prevalence in the world, also passed a soda tax. The advocacy coalition there did superb work and it didn’t hurt that the groups had $16 million from Bloomberg Philanthropies.

NF: In the industry-funded campaigns against New York State’s soda tax and New York City’s portion size limitation, opponents of these measures said they were unfair to low-income communities and people of color because they limited choice and imposed a bigger cost burden on the poor.  What’s your response to those argument?

MN: My first response: type-2 diabetes is unfair to low-income communities and people of color because they limited choice and a bigger cost burden. Much of Soda Politics is about race and class in America and I subtitle the chapter on marketing to minorities “a complicated story.” Is it ever. Decades ago, African-American and Hispanic groups petitioned and boycotted soda companies in order to get the companies to employ minorities and advertise in their publications. I was surprised to learn that the Reverend Martin Luther King, on the night before his assassination, gave a speech exhorting his followers to boycott Coca-Cola because the company was not hiring African-Americans.

Today. Coca-Cola generously funds minority organizations (as part of its Mr. Hyde strategy), thereby buying silence about the effects of sugary beverages on the health of their communities.   Fortunately, this too is changing. The health message is out and more and more people understand that Big Soda does not really have their interests at heart.

NF:  What’s your next writing project?

MN: In Soda Politics, I wrote about how Coca-Cola and the American Beverage Association fund universities and investigators to generate research that counteracts studies linking sodas to poor health or to generate results that can be used in marketing. I think the whole question of food industry funding of research deserves a close look and I’ve already accumulated a book’s worth of examples. The project is still in the thinking stage but will end up having something to do with conflicts of interest in food and nutrition research and practice. In the meantime, I’m covering the topic in occasional posts at www.foodpolitics.com.

April 9, 2022
Subscribe To Weekly NYC Food Policy Watch Newsletter
Subscribe to our weekly email newsletter today to receive updates on the latest news, reports and event information
We respect your privacy. Your information is safe and will never be shared.