Kim Kessler is the Policy and Special Programs Director of the Resnick Program for Food Law and Policy at UCLA School of Law, a newly created program dedicated to studying and advancing law and policy solutions to improve the modern food system. 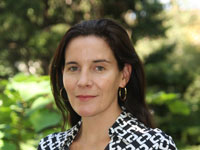 of this year, Kessler served as the Food Policy Coordinator for the City of New York.  In this capacity, she coordinated the efforts of City agencies to inc rease access to and availability of healthy food for New Yorkers, promote food security, and improve the sustainability of the city’s food system.  During her tenure as Food Policy Coordinator, she served on Mayor Bloomberg’s Obesity Task Force, and oversaw the development and implementation of numerous food-related initiatives in the task force’s final report, including those to increase the city’s healthy retail access programs, expand healthy school food and wellness initiatives, and launch new urban agriculture projects. Prior to working at City Hall, Kessler was an attorney at the law firm of Debevoise & Plimpton.  She received an A.B. degree in Political Science from Brown University and a J.D. degree, magna cum laude, from New York University School of Law.  She currently lives in Brooklyn with her family.

What motivated you to get involved with food policy and to become a food policy advocate? Was there a specific trigger or inciting incident?”

The person most responsible to drawing me to these issues is my sister, Jenny Kessler.  I was always interested in issues of civil rights and inequities, which is why I went to law school.  My sister had the same interests, and she first studied international development, then became an organic farmer, and finally a NYC teacher who started an incredible school garden and food learning program at a high school in Brooklyn. And it was my conversations with her that really pulled me to this area.  I remember in particular she told me about a writing lesson she was doing where she gave her students fresh raspberries.  And some of them had never seen a raspberry. It may speak to my own naiveté at the time, but I was shocked by that.  I thought it pointed to major dysfunction, when one considers that raspberries grow in this area, including some wild varieties.  It just highlighted the amount of disconnect we have in our system, and that needs to be fixed.

What do you think are the greatest food (policy) challenges facing NYC in the years to come?

Unfortunately, many of our challenges are very significant – diet-related disease, hunger, issues of affordability and access to healthy foods.  These are major issues in NYC and across the country.  The good news is that we have demonstrated that municipal approaches can make an impact, with programs addressing healthy food access, food insecurity, and sustainability. For example our Green Carts initiative has not only created almost 500 new produce vendors in underserved neighborhoods, directly impacting access, but we have also learned that in neighborhoods where Green Carts were introduced, other stores also started carrying more produce.  That’s a systemic change.  So, the broad opportunity is to continue to be a nationwide leader in tackling these hard problems at the local level.

How would you describe the current food movement in the New York City? Do you think it is becoming more effective? Why?

It’s dynamic, growing and increasingly coalescing around key themes, which is all very positive.  There is no question that in addition to all of the amazing work that is done across the City by food-conscious groups, contributing to policy advocacy is also an important role.   What I hope is the next phase for the food movement, at least at the local policy level, is moving from broad themes to specific priorities and working together to make the case for the most significant and high priority goals.

New York City is one of the largest purchasers of food in the United States. Do you have suggestions on specific ways food policy advocates and government officials can use this advantage?

New York City has been a nationwide leader in harnessing our purchasing power to advance our healthy food access goals.  We were the first major city in the nation to adopt healthy food purchasing and service standards in 2008, which apply to all of the 260 million meals and snacks we serve per year. These standards have had an incredible citywide impact – affecting hundreds of thousands of New Yorkers served by our programs every day, and the broader supply chain, because our demand for healthier, higher-fiber, lower-sodium items had moved manufacturers and vendors to meet our needs.  This initiative has been looked to by other localities across the country and the federal government.  More recently, pursuant to local law, we adopted local food purchasing guidelines, to push agencies to purchase more locally produced foods.  Again we are among the first cities to do this.  What we have learned from our nutrition standards is that the role of both Mayoral commitment to these initiatives and technical assistance is incredibly important – and I hope these things continue.  There is more to do to maintain, improve, and deepen, particularly with regard to increasing purchases of sustainably produced foods.   Advocates can help by holding the City accountable to these policies.

What is the one food policy change at the local or national level that would have the greatest impact on health in New York City?

As we all know, there isn’t any one silver bullet here, given the complexity of the food system and the factors affecting health, disparity, and poverty.  That said, speaking specifically about food policy and health – in terms of near-term population-level health impact, the number one thing is reducing sugary drink consumption.  What we have tried to do and pushed for are policies to support reductions in that consumption – we have pushed for aligning the SNAP program with heath priorities, including by allowing localities to test the concept of limiting the purchases of sugary drinks with benefits, and incentivizing the purchases of healthy foods with benefits – like we do with our Health Bucks program here in NYC.

What would you say is the greatest accomplishment regarding food policy has been in the Bloomberg Administration? What accomplishments of the Mayor’s Office of Food Policy do you feel most proud of?

Well, the first thing that comes to mind, which I have already talked about, is the citywide nutrition standards for the food we purchase and serve in City programs – the vast majority of which are served in our schools, but also in our correctional facilities, day care centers, hospitals, shelters and more. Healthy procurement work tends to happen behind the scenes, but these standards apply to more than a quarter billion meals and snacks served per year by City programs – and that impacts hundreds of thousands of people. It’s also a low-cost, pragmatic, policy solution.   So I see that as a huge accomplishment and something the City has continued to build on by adopting additional organizational policies to promote health, such as for vending and for the commissaries in correctional facilities.

Stepping back though, it’s important to acknowledge that a major food policy achievement of the Bloomberg Administration has been helping to put municipal food policy on the map and demonstrating how much City government can do to advance food policy goals – from improving healthy retail access to promoting access to the city’s food support programs.  NYC was the first major city to have a role in the Mayor’s office dedicated to driving the policies and initiatives.  That is symbolic of how this issue has been elevated in our City government, and in almost every major city agency there is someone working to help implement the city’s food initiatives.

In terms of our office, I am most proud of continuing to expand our portfolio and innovate in this area. We have sustained, intensified and deepened the City’s work on healthy food purchasing, access and food security – and in recent years added sustainability to that portfolio through efforts supporting urban-rural linkages and urban agriculture.   I look at the pilot Fruit and Vegetable Prescription Program in our public hospital network, and the NYCHA initiative to create 5 new large scale urban farms on their sites – modeled on the new farm launched last summer at the Red Hook Houses – as really exciting, new transformative projects.  Both initiatives also exemplify the role of collaboration that is essential to making positive changes, working with city agencies, nonprofits and philanthropic support.  It’s the many partners that make it happen.

January 28, 2020
Subscribe To Weekly NYC Food Policy Watch Newsletter
Subscribe to our weekly email newsletter today to receive updates on the latest news, reports and event information
We respect your privacy. Your information is safe and will never be shared.