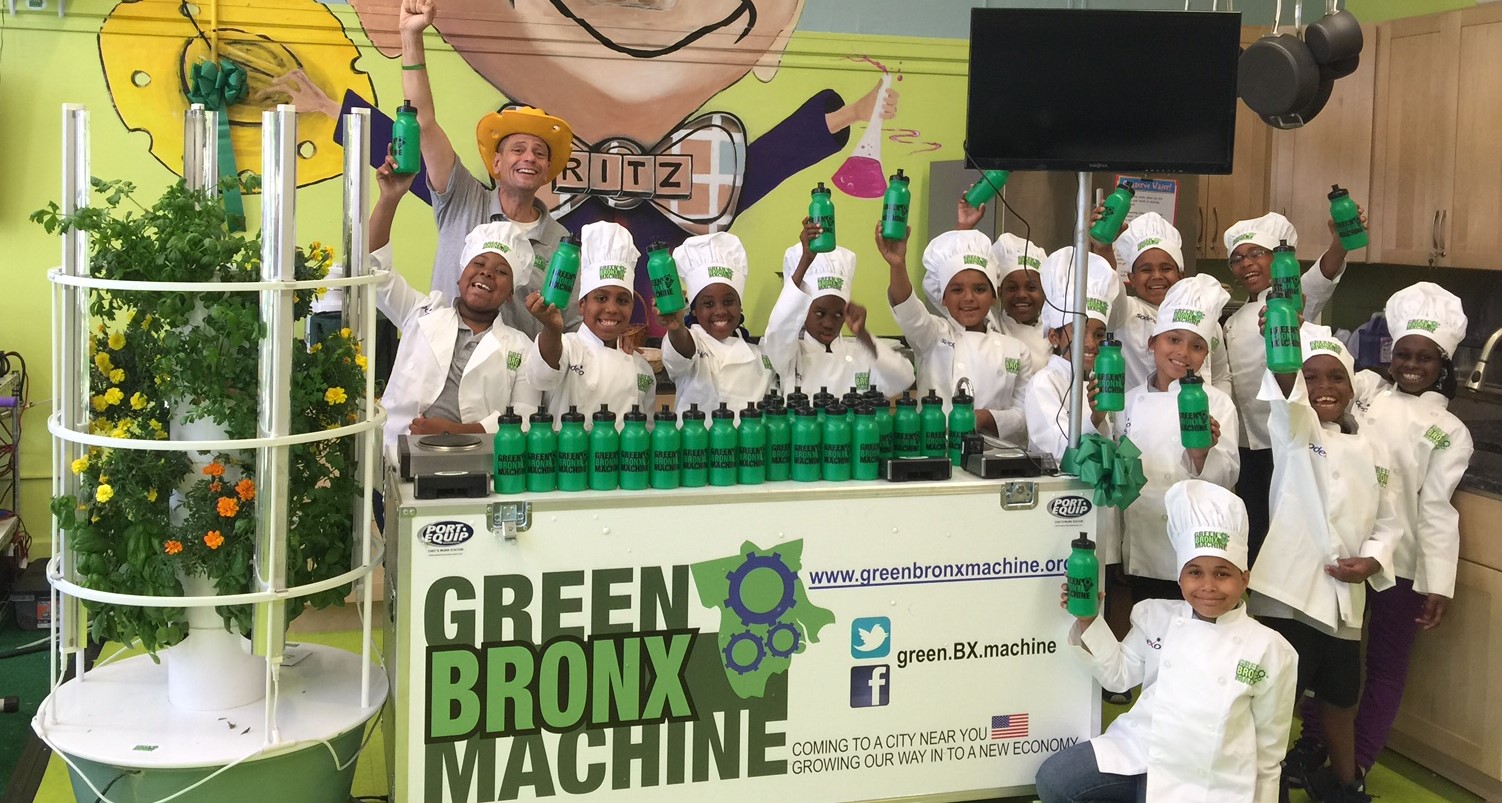 What they do: Green Bronx Machine builds healthy, equitable, and resilient communities through school-based models that use urban agriculture to encourage student performance and promote healthy eating for living, learning and earning.

How they do it: Green Bronx Machine is an impact-driven organization rooted in the belief that healthy students drive healthy schools, and that healthy schools are at the heart of healthy communities. The organization was born via a collaboration between lifelong educator Stephen Ritz and his students, who observed that as waistlines expanded, school engagement, performance and attendance suffered. Originally an after-school alternative program for high school students, Green Bronx Machine has evolved into a K-12+ model fully integrated into an award-winning core curriculum that is nationally used as a way for students to grow, eat and love their vegetables en route to spectacular academic performance and living-wage jobs.

Latest project/campaign: In 2016, Green Bronx Machine transformed an underutilized library in Community School 55, a 100+-year-old school building in the South Bronx, into the National Health, Wellness, and Learning Center, an innovative and engaging commercial indoor vertical farm and food processing/training kitchen with solar and alternative energy generators, where students and teachers can learn and grow. This community has some of New York State’s highest per capita rates of childhood obesity, diabetes, heart disease, unemployment and underemployment, food insecurity and food stamp recipients. Ninety-nine percent of students qualify for free or reduced lunch while fast-food restaurants are accessible at every corner. Green Bronx Machine serves the entire Community School 55. In the organization’s inaugural year, there was an impressive 45 percent school-wide increase in passing grades on New York State Science Exams. To date, the National Health, Wellness and Learning Center has hosted visitors from more than 6 continents, 60 countries and across the nation.

The Green Bronx Machine Institute, launched nationally last year, will be launched this year in partnership with the NYC Department of Education, having been named an exemplar program by the Newman’s Own Foundation and the Robert Wood Johnson Foundation, and cited as one of the top five national programs of Service Learning by the National Association of Secondary School Principals. Most recently, it made the list of Top 100 Educational Innovations in the World.

Interesting fact about how it is working to positively affect the food system: Every day hundreds of children show up to grow fruits and vegetables. Green Bronx Machine students have presented the organization’s curriculum and technology nationally and have traveled from their local greenhouse to the White House, always ready, willing and able to export the organization’s grit, talent and diversity. Along the way, some of Green Bronx Machine’s critical benchmarks have included moving targeted daily attendance rates from 40 percent to 93 percent, achieving 100 percent passing grades on New York State Examinations, and helping to create 2,200 local jobs. The organization’s work has been featured on the cover of TIME MAGAZINE for KIDS, and Founder, Stephen Ritz, was named the Global Food Educator Award Winner at the 2018 Seeds & Chips Food Innovation Summit. There are 6,000 Green Bronx Machine classrooms in the US alone. The organization’s one classroom in the South Bronx  grows enough food to send students home with 100 bags of vegetables per week, and, in partnership with Memorial Sloan Kettering Hospital, to provide 400 bags monthly to support local seniors in public housing who are both food insecure and recovering from cancer.

Food For Others Garden

Year Started: Began loosely in 2009 and became an official nonprofit in 2011

Want to Get Your Hands Dirty? Visit a NYC Urban Farm This Summer.

February 10, 2020
Subscribe To Weekly NYC Food Policy Watch Newsletter
Subscribe to our weekly email newsletter today to receive updates on the latest news, reports and event information
We respect your privacy. Your information is safe and will never be shared.