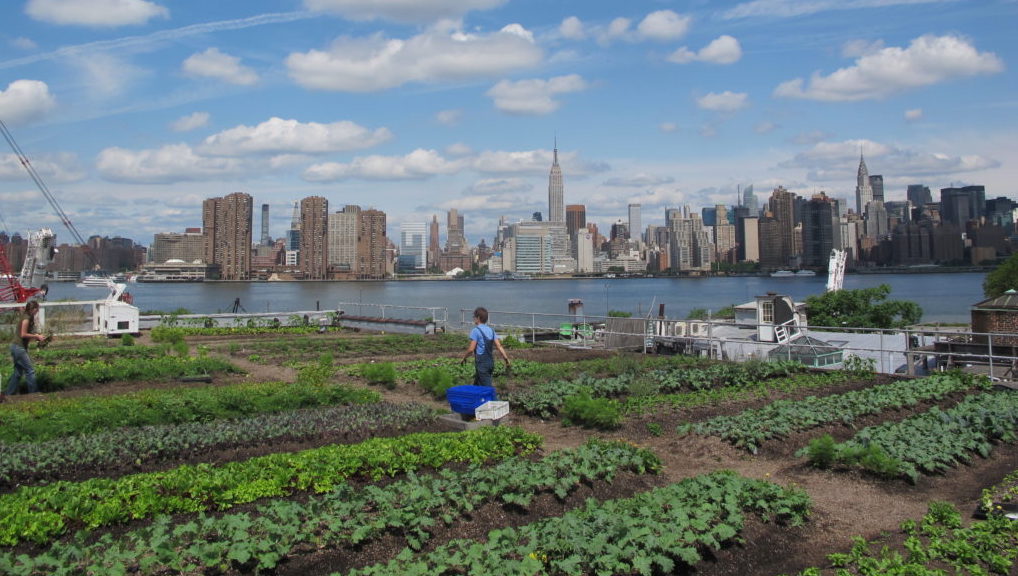 What they do: Eagle Street Rooftop Farm is a 6,000-square-foot organic vegetable farm located on a warehouse rooftop in Greenpoint, Brooklyn. The Farm is a product of the collaborative effort between the green roof design and installation firm Goode Green and the Brooklyn-based sound stage company Broadway Stages, which financed the installation of the Farm.

The Farm realizes the economic, ecological and societal benefits of green roofing while also bringing local produce to the North Brooklyn community. According to Michigan State University, green roofs can “improve stormwater management by reducing runoff and improving water quality.” In addition, they help to “conserve energy, reduce noise and air pollution, sequester carbon, increase urban biodiversity by creating a habitat for wildlife, increase the space available for urban agriculture, provide a more aesthetically pleasing and healthy environment for surrounding residents, and improve return on investment compared to traditional roofs.”

Eagle Street Rooftop Farm operates a weekly farm market and caters to area restaurants. Between 2010-2011, it became the first rooftop farm to host its own site-based Community Supported Agriculture (CSA) program. In 2010, the Farm also launched an Apprenticeship Program, which instructs seasonal apprentices (spring, summer, fall) in organic farming based on the Farm’s planting and growing practices. Additionally, with support from Growing Chefs, a nonprofit field-to-fork education program that is also under the aegis of Annie Novak (the co-founder and farmer of Eagle Street Rooftop Farms), the rooftop farm’s education staff operates a range of other educational programs.

How they do it:

In its first season, the Eagle Street Rooftop Farm grew over thirty types of produce, from watermelon to cabbage, in order to see which would thrive in a green roof growing environment. The most botanically successful crops for health and high yield included hot peppers, cherry tomatoes, and sage.

Since the 2012 growing season, the Farm has focused on a selection of hot peppers to begin development of a Brooklyn-based hot sauce. Currently you can find their hot sauce – “Awesome Sauce” – at Archestratus Books + Food as well as at Littleneck Outpost, both located in Greenpoint.

On Sundays in the growing season, the Farm is open to the public and welcomes volunteers of all skill levels during its market hours, which are listed on the events calendar. Growing Chefs curates the farm’s Free Lecture series, which are held at two o’clock on Sundays and have covered topics ranging from urban chicken-keeping to pickle making.

Latest project/campaign: The publication of their book, The Rooftop Growing Guide: How to Transform Your Roof into a Garden or Farm, in February 2016.

Interesting fact about how it is working to positively affect the food system: The Eagle Street Rooftop Farm’s education staff, working with Growing Chefs’ curriculum, hosts a range of workshops for children and adults. Topics include growing food in New York City, seed-saving, the art of cooking locally, city composting, the benefits of green roofs, beekeeping, and guest lecturers.

September 29, 2015
Subscribe To Weekly NYC Food Policy Watch Newsletter
Subscribe to our weekly email newsletter today to receive updates on the latest news, reports and event information
We respect your privacy. Your information is safe and will never be shared.