On behalf of the NYC Food Policy Center, we’d like to extend our condolences to all who lost loved ones in the East Harlem building explosion on March 12th. The Hunter community was touched personally by this tragedy as well, with the loss of Sgt. Griselde Camacho, a well-respected security officer at our school.

Coming up on Tuesday, April 1, 2014, we’ll host our second Food Policy for Breakfast Seminar of 2014 at the Roosevelt House Public Policy Institute at Hunter College, “Growing a Public Food Sector in New York City.” Debbie Field, Executive Director of Food Share in Toronto, Canada  will describe how the public food sector in Toronto has expanded and analyze what we can learn from experiences in Brazil and other nations.  Panelists  will also describe the past and present state of the public food sector in New York City.

RSVP to this free event here

Have you bought your ticket for the 2014 Just Food Conference (April 5-6)? Join the New York City Food Policy Center and food advocates for two days of education and conversation about issues of sustainability and food justice. In our workshop on Sunday, April 6, “CREATING GOOD FOOD JOBS,” we’ll analyze the facilitators and barriers to creating more good food jobs in New York City. Nicholas Freudenberg will moderate a panel of experts from various sectors of the food economy who will present brief descriptions of model programs from New York City and elsewhere. 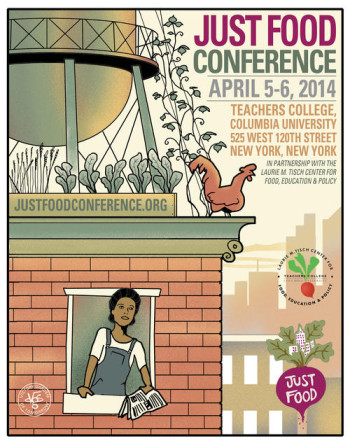 As part of the NYC Food Forum, we have been working collaboratively to contribute to legislation for a New York City food policy council. Resources on food policy councils can be found on our website. For more information or to contribute your ideas to this process, reach out to NYC Council Member Ben Kallos (District 5) or the NYC Food Forum. To support the Forum or become a member: sign on to the primer, our guiding document available here.

There’s much more work to be done, and we’re eagerly moving ahead with our community partners to contribute to the food policy dialogue that is now, more than ever, at the forefront of New York City’s collective consciousness.

February 10, 2016
Subscribe To Weekly NYC Food Policy Watch Newsletter
Subscribe to our weekly email newsletter today to receive updates on the latest news, reports and event information
We respect your privacy. Your information is safe and will never be shared.