Summer meals are available to all children ages 18 and under, free of charge, at many locations across the city including schools, community pools, NYCHA complexes, libraries, community centers and day camps when school is not in session. Although universal free school meals is not yet a reality for most school children, the Summer Food Service Program is intended to feed hungry children who rely on NYC Schoolfood for two meals each school day throughout the school year. Many of these children come from food insecure homes and 75% qualify for free or reduced price lunch. Despite these alarming numbers, the summer meals program is underutilized: only 15% of the estimated eligible children participate. With the 2015 season now in full swing, we provide here an overview of summer meals statistics and trends. We thank Community Food Advocates, Share our Strength and NYC Coalition Against Hunger for their efforts in compiling and sharing this data.

442 OPEN SITES ACROSS THE 5 BOROUGHS

In addition to open sites, many community recreational programs, special education programs, parochial schools, day camps, and other non-public sites operate citywide. There were 1185 lunch sites in 2014, up from 1147 in 2013.

Participation is on an upswing since 2010, but on average approximately 70,000 less children each day were served in 2014 compared to 2001. Community Food Advocates has proposed that higher rates of participation would follow if breakfast and lunch was served in the classroom and if the threshold of daily participation imposed by DOE was lowered to include schools in low-income under-served neighborhoods.

[1] Free-standing middle schools enjoy universal free school lunch, and universal free breakfast has been implemented since 2003. Breakfast after the bell will be piloted in the 2015-2016 school year 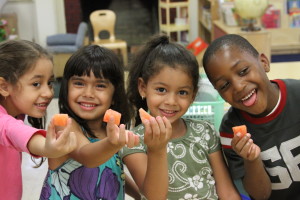