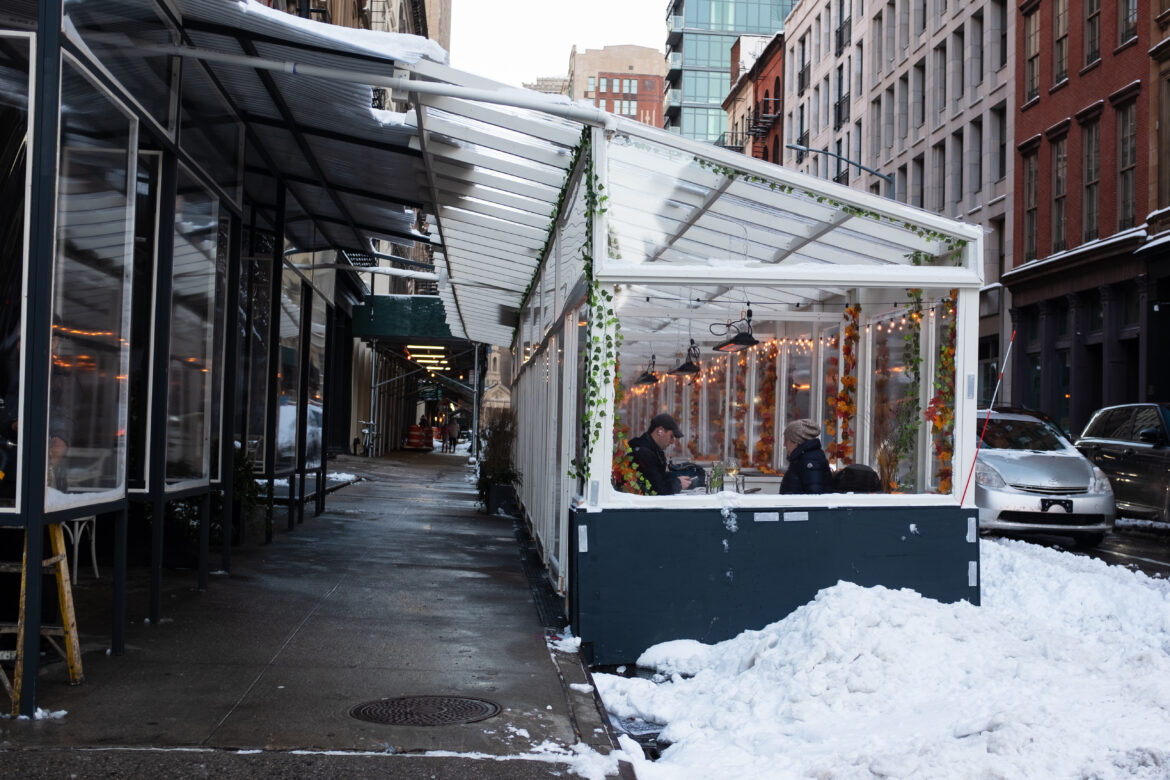 Twenty-two New Yorkers are suing the City in an attempt to prevent the Open Restaurants program from becoming permanent. The program, first introduced on an emergency basis in June 2020 as a response to COVID-19 restrictions on indoor dining, allows participating restaurants to use sidewalk and parking space for outdoor service. Last month, however, Mayor de Blasio announced his intention to turn Open Restaurants, which currently involves almost 12,000 establishments, into a year-round program as part of NYC’s post-pandemic economic recovery.

City officials backing the program’s expansion identify the restaurant industry as a pillar of the City’s economy, culture, and international renown. A report released by the Office of the New York State Comptroller in April 2021 identified restaurants as “essential to New York City’s social and economic fabric and “key to the future” of New York in the wake of the pandemic. The report further described the industry as an essential component of the City’s $46 billion tourism industry and a significant source of tax revenue. In 2019, the NYC restaurant industry generated nearly $27 billion in taxable sales, roughly 15 percent of total taxable sales made in the City over that period.

By extending the Open Restaurants program, city officials also intend to support the hundreds of thousands of people employed in the NYC restaurant industry. Before the announcement of the program’s continuation, estimates suggested that as many as 12,000 of the City’s restaurants could close permanently over the next year, resulting in the loss of roughly 159,000 jobs. The expansion of the Open Restaurants program, which Mayor Bill de Blasio credits with saving roughly 100,000 jobs over the last year, could help to mitigate these losses.

“Open Restaurants was a big, bold experiment in supporting a vital industry and reimagining our public space. And it worked,” said Mayor de Blasio in a September 25th press conference announcing the program change. “As we begin a long-term recovery, we’re proud to extend and expand this effort to keep New York City the most vibrant city in the world. It’s time for a new tradition.”

The plaintiffs dispute de Blasio’s decision, arguing that the Open Restaurants program amounts to “the occupation of New York City’s public spaces.” In their 108-page petition, filed October 18th, 2021 with the New York Supreme Court, they allege that Open Restaurants introduces accessibility challenges, noise, and “lawlessness” to their Manhattan and Brooklyn neighborhoods.

Many petitioners claim that open restaurants impede foot traffic. They express particular concern for elderly pedestrians already facing mobility challenges. In her statement, Dorothy Green, who is in her 80s and a resident of Cornelia Street in Manhattan’s Greenwich Central Village writes that she sometimes struggles to maneuver around open restaurants’ sidewalk seating and semi-permanent structures. Ellen Koenigsberg, who owns a vintage clothing store on Ludlow Street on the Lower East Side, additionally claims that tables, crowds, and “heaps of garbage” introduced by open restaurants have made it more difficult for patrons to access her shop.

Other plaintiffs report that outdoor dining structures make navigating city streets by car and finding parking more difficult. The Mayor’s Office estimates that structures created by open restaurants occupy only around 8,550 of the city’s more than 3 million curbside spots. Nonetheless, the petitioners state that this use of curbside space forces them to park further from their residences and that the sheds result in “traffic backing up on the narrow streets; exhaust fumes being emitted” and delays in the arrival of emergency vehicles.

Phipps and her fellow petitioners are not alone in their fire safety concerns. This past winter, as many open restaurants began to use propane heaters to keep outdoor diners comfortable, many city residents feared that introducing the fixtures to flammable outdoor dining structures could spell disaster. So far, City inspectors report that no fires have been attributed to the heaters. Nevertheless, Mayor de Blasio announced in October that open restaurants would not be allowed to use outdoor heaters this winter out of concern for “keeping diners and staff safe.”

In theory, the Open Restaurant program’s building regulations address the drainage and fire safety concerns raised by Krawitz, Phipps, and other NYC residents. They also deal with a range of other potential issues, including ADA compliance, ventilation, and roadway barriers to protect diners from traffic. Since the program’s launch, City inspectors have issued around 1,200 building compliance violations.

The plaintiffs argue, however, that the City’s enforcement of the building regulations has proved insufficient. “Despite New York City’s Open Restaurant regulations, there continues to be a surfeit of violations by many restaurants and a dearth of enforcement,” alleges Robin Felsher, who lives in an apartment on Greenwich Avenue. In their preliminary statement, the petitioners express their collective belief that an “expansion of the program will only further tax inadequate enforcement procedures,” leading to additional unaddressed violations.

The plaintiffs further contest a June decision by the NYC Department of Transportation (DOT), which stated that open restaurants do not have a negative environmental impact. The DOT’s environmental assessment considered the effects of the Open Restaurants program on human health, noise levels, and community character, and concluded that allowing outdoor dining in residential districts “would contribute to the fabric of neighborhoods.”

Petitioners counter these findings, arguing that the increase in outdoor dining space creates trash and entices vermin. “Garbage pails overflow and big black garbage bags are always piled up next to restaurants and the shed and, because of this, the rat population has grown immensely,” states Kathryn Arntzen, who also lives on Cornelia Street. Petitioner Stuart Waldman, a homeowner in the West Village, is also concerned that the presence of rats and trash devalues his property.

The plaintiffs’ pest concerns touch upon the rat problem confronting NYC’s residential areas. At the beginning of the pandemic, the Centers for Disease Control and Prevention warned that restaurant closures would cause rats to expand their search for food beyond commercial areas into neighborhoods. Now, as restaurants reopen and many of their regular food sources are restored, rat populations appear to be thriving. In March 2021, New Yorkers made 80 percent more rodent complaints to the city as compared to the previous year.

Many of the plaintiffs’ concerns deal with noise. Pauline Augustine, who resides on Sullivan Street, complains that “loud conversations and revelry” among outdoor diners force her to turn up the volume on her TV. Arntzen takes issue with the music her neighborhood’s restaurants play on their outdoor sound systems. “The din is at times unbearable,” she reports.

Petitioners further claim that outdoor dining structures are an “impairment” of their neighborhoods’ historical and architectural character. They take issue with the look of the semi-permanent outdoor dining structures, describing them as “roadway shanties” or “shed shanty towns.” Leslie Clark, who has lived on West 4th Street for 45 years, is concerned that an expansion of the program “will fundamentally change the essential character of [her] community.”

In light of their experiences, the plaintiffs argue that the City has failed to “take a hard look at the [environmental] impacts” of the Open Restaurants program before deciding to make it permanent. Furthermore, petitioners allege that the City has not adequately addressed their concerns and the “thousands of complaints” they and their neighbors have made through NYC311 as well as to the Police, Fire Department, and city officials. The petition asks the court to mandate that the City complete a new environmental impact assessment.

The Future of Open Restaurants

Barring complications stemming from the lawsuit, the Open Restaurants program seems here to stay. At the September 25th press conference, Brooklyn Borough President Eric Adams, the frontrunner in the ongoing mayoral race, signaled that he would uphold de Blasio’s decision should he win the election in November.

“With our city still reeling from the economic devastation wrought by the coronavirus, I am glad to see this program will now be made permanent,” he said. “This kind of practical policymaking must continue to guide our recovery, with a strong emphasis on equity, in the months and years ahead.”

The NYC DOT meanwhile has already begun a two-year process to redesign the Open Restaurants program for permanent implementation. Over the next six months, NYC DOT and the Department of City Planning (DCP) will engage the public in the design process through a series of in-person and remote roundtable discussions. Next summer and fall, the departments will involve community stakeholders and borough governments in the creation of formal rules governing the permanent Open Restaurants program.

By Winter 2022, the City plans to publish a resource guide for restaurant owners and begin accepting their applications to participate in the program. Although the departments have not released projections for how many restaurants they expect to participate, some petitioners fear that the permanent program could incentivize landlords to rent to open restaurants over retail businesses, leading to a steady increase in the number of open restaurants.

As part of this process, NYC DOT has introduced an online form where city residents are encouraged to give feedback on Open Restaurants. This feedback mechanism was not available to the petitioners and other concerned city residents before the City decided to make the program permanent. Those wishing to lodge a formal Outdoor Dining Complaint can continue to do so using a designated NYC311 webpage.

September 25, 2013
Subscribe To Weekly NYC Food Policy Watch Newsletter
Subscribe to our weekly email newsletter today to receive updates on the latest news, reports and event information
We respect your privacy. Your information is safe and will never be shared.