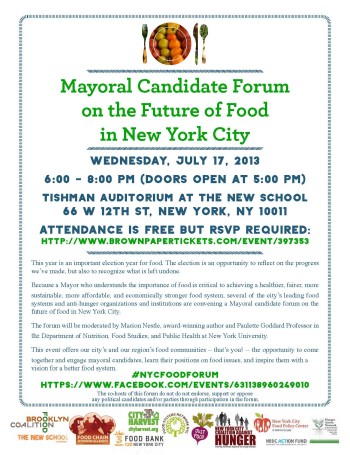 Moderator Marion Nestle, award-winning author and  Professor in the Department of Nutrition, Food Studies, and Public Health at New York University presided over a passionate crowd of advocates, community members, academics, politicos, urban aggies, and community organizations and agencies. Each candidate answered a series of questions on topics ranging from school food to NYC’s food procurement policies as well as questions from  community members in attendance.

Dr. Nestle captured the spirit of the night when she said, “The forum is a tribute to the absolute importance of food in NYC,” and added, “This isn’t really about the candidates; it’s about us.”

In case you missed event,  here are the highlights:

First candidate up was Anthony Weiner (D), whose platform for reducing hunger in New York City includes the destigmatization of school lunch and SNAP (Supplemental Nutrition Assistance Program, formerly known as Food Stamps), doubling the amount of school food served in the summer, as well as adding value to SNAP dollars to increase purchasing power for healthy foods, rather than limiting purchases.

Candidate Weiner also supports living wage legislation and immigration reform that isn’t punitive to food workers. He brought the conversation to the topic of health, mentioning his goal to establish a single payer healthcare system for New Yorkers and is also a proponent of food workers unions.

While he would continue Mayor Bloomberg’s current food policies, Weiner believes them to be small-minded. “People can’t afford the organic milk I feed to my son, that’s why they buy $.99 sodas.”

Weiner looked for an opportunity to talk about a federal issue “Ask me about the farm bill!”  he begged.

He also suggests establishing a “non-profit czar” who would oversee private-public and non-profit efforts relating to food initiatives and social work throughout the city.

Bill DeBlasio (D) came next, he is currently public advocate for New York City. DeBlasio believes we need to start to “connect the notions of environmental, food supply and economic sustainability.” He is believer of the power of local purchasing to the maximum extent possible, and would like to see Hunts point redeveloped as a more sustainable and job creating hub.
On the topic of school food, DeBlasio feels that the city is missing an opportunity to use federal funding to make school lunch free and would like to see food in classrooms and universal school breakfast. He also feels that updating school cafeterias is an important investment and good use of capital funding.

DeBlasio would take a less top-down approach than the current administration and said that government should start listening to stakeholders, with a focus on transparency. Rather than a mayoral-appointed food policy coordinator, he would like to see a deputy mayor with a public mandate to coordinate food policy.

DeBlasio would also like to see wider acceptance of EBT in stores and believes that we should  harness the purchasing  power of New York City agencies to purchase local food.

Sal Albanese (D) served on the New York City Council for four terms. To improve access to healthier food, Albanese ,supports the creation of a food policy council “with teeth” that would involve upstate farmers, urban farmers and address food deserts and would like to see available empty land to be used for community gardens.

As a former school teacher with a background in nutrition, Albanese wants to make sure that all children have health and physical education classes.

Albanese is the author of the city’s first living wage law in 1996 and would like to expand living wage legislation as a way to address income inequality, what he sees as a root cause of health disparities related to food.

Mr. Albanese noted that he is the only candidate not accepting contributions from developers. “I want to be a mayor that makes decisions on the merits.”

John Catsimatidis (R), the only Republican in attendance, is the owner of grocery store chain Gristedes. He supports increasing zoning in new buildings and incentivizing building owners to rent to food stores as a way of addressing the issue of food deserts and access and believes that supermarkets should be considered essential services and be categorized as such.

Candidate Catsimatidis  wants to see local food purchasing expanded, simply because it costs less to deliver and saves money all the way down the line.

He also supports increasing wages, citing his supermarkets as an example of an effective union that protects its members. He also would like to get more SNAP benefits to those that need them, as well as avoiding fraud in the SNAP program.

Christine Quinn (D), speaker of the City Council, believes the food economy is a key area that the city needs to harness to diversify our economy from just finance and real estate. She cited La Marqueta in East Harlem and the incubator kitchen that has produced 32 food start-ups since it’s inception.

Regarding food workers, Candidate Quinn believes that the purchasing power of the city can be used to affect living wage standards and supports the fast food workers citywide campaign for higher wages.

Quinn’s plan around children’s health issues includes requiring that meals marketed to children at any restaurant meet USDA standards, as well as ensuring their access to health care (through increasing health clinics in public schools).

She is a supporter of universal classroom breakfast and take-home meals for the weekends via better coordination between schools and food pantries and suppliers.

Though her report Foodworks originally called for the creation of the office of the food policy coordinator, she believes that there should be more engagement with stakeholders, possibly through advisory boards and public or webcasted meetings. She does not support the creation of an independent city agency devoted to food, fearing it would let other agencies off the hook for taking responsibility for food issues..

To decrease hunger in NYC,  Quinn would increase SNAP enrollment through more targeted outreach to those who qualify, increased acceptance of EBT and moving federal resources to NYC.

John Liu (D), Comptroller, who admitted to munching on carrots before his turn on stage, believes the city needs to rely on non-profits more than the government to increase food access. He also noted that 40% of food is wasted before it gets to the table.

Liu’s wants to promote a regional food economy and would start by revamping procurement processes to get better quality and better tasting food to city children. (His son will not eat school lunch).

Liu wants to expand the middle class by uplifting the urban poor. According to his office’s research, the minimum wage should be $11.50/hour, more than the $9 oft cited that he feels is not enough for someone working full time to escape poverty. He believes that the wealth gap is the biggest problem facing the city.

Liu also spoke about his experience doing the SNAP Challenge, living on a Food Stamp budget for 1 week – he traveled to a Brooklyn supermarket from his Flushing neighborhood for a sale.

The audience was encouraged (and still are!) to tweet their reactions to candidates (see handles of participants below).

Moderator Marion Nestle referred to the night as a historic occasion, seeing as that never before has the food movement been strong enough to demand attention from mayoral candidates.  Moreover, she explained, “we are creating a record on which to hold candidates accountable in the years following the election.”

For the organizers and audience alike, the event symbolized much more than drawing attention to upcoming election, it was about growing NYC’s food movement and using the upcoming mayor’s influence to break new ground and bring about needed changes.

So what’s next? The success of the first Mayoral Candidate Forum on the Future of Food in NYC is just the beginning.  We must be active. Speak up. Participate in the process. Wednesday night showed us that the food movement is a major factor in this year’s election and victory – however we will define it – is within reach. Let’s seize this opportunity for real change that will affect us all.

Thanks to all of the co-hosts, contributors, volunteers, funders, candidates, attendees, and everyone who participated in this event!

This year is an important election year for food.

Chilis on Wheels Plant Based Activism and Community...

September 30, 2014
Subscribe To Weekly NYC Food Policy Watch Newsletter
Subscribe to our weekly email newsletter today to receive updates on the latest news, reports and event information
We respect your privacy. Your information is safe and will never be shared.