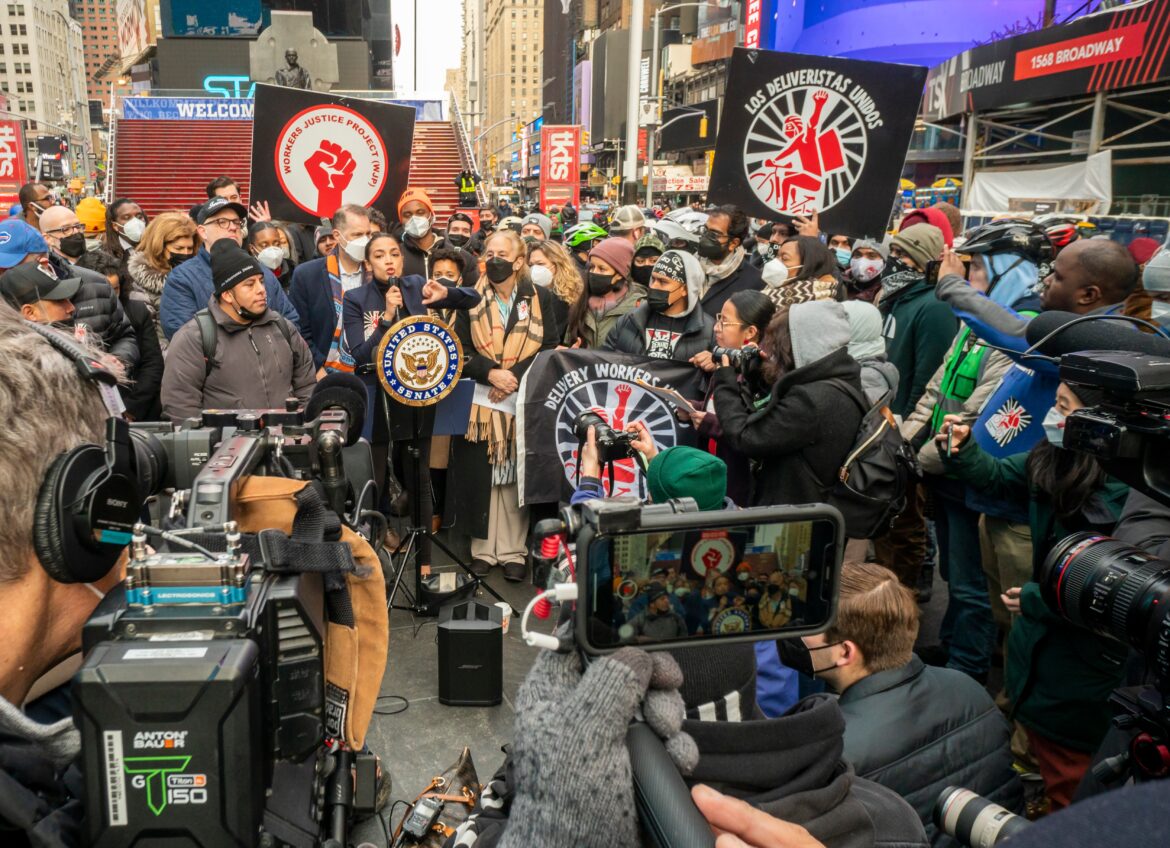 What they do: Starting in early 2020, the Workers Justice Project began organizing food delivery workers who work through apps such as GrubHub, DoorDash, Uber Eats, and others. This collective became Los Deliveristas Unidos (LDU), a group working toward giving app delivery workers access to basic labor rights. With more than 65,000 app delivery workers in New York City, this is a large cohort that needs protection.

App delivery workers are part of the gig economy, those who provide on-demand services and generally are treated as independent contractors or freelancers. Since gig workers are usually not considered traditional employees, they do not have access to all the same labor rights as employees. This results in lower pay, health and safety issues, and lack of access to benefits such as health insurance.

How they do it: The Workers Justice Project began organizing app delivery workers in the early months of the pandemic, and continues to advocate for this vulnerable group. Los Deliveristas Unidos also provides them with resources to help them succeed, including bicycle maintenance, leadership training, and PPE supplies.

Latest project/campaign: After more than a year of activism on the part of the Workers Justice Project, the New York City Council passed a set of bills to improve rights for app delivery workers in September 2021. These bills cover six major shortcomings of the previous policies:

LDU has also fought for a minimum wage of $23.82 per hour for app delivery workers, along with pay for “on-call time” (time workers spend waiting for an order to come in). This minimum wage is scheduled to go into effect by 2025.

LDU also spearheaded a campaign to bring “Deliveristas Hubs” to the city. This program will use existing City infrastructure, such as vacant newsstands, to provide locations for app delivery workers to rest, seek shelter from difficult weather conditions, and recharge their e-bikes and cell phones.

Interesting fact about how it is working to positively affect the food system: In spring 2021, LDU gained the support of the powerful labor union 32BJ SEIU, the same union that helped reach a $15 minimum wage for fast food workers in 2015.

Mutual Aid and Solidarity in Sunnyside and Woodside

June 14, 2019
Subscribe To Weekly NYC Food Policy Watch Newsletter
Subscribe to our weekly email newsletter today to receive updates on the latest news, reports and event information
We respect your privacy. Your information is safe and will never be shared.