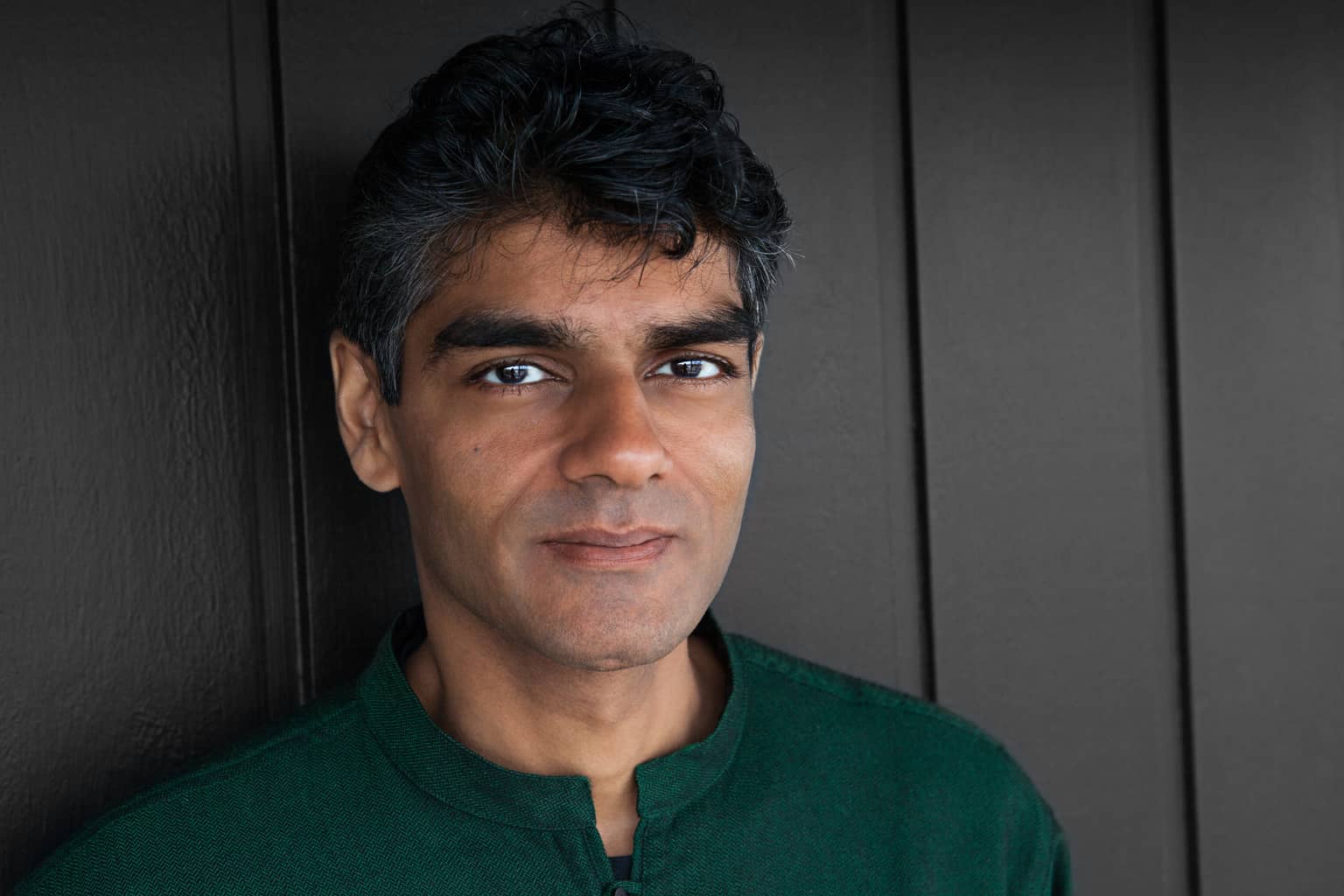 Raj Patel, PhD, is an activist, journalist and academic who is a Research Professor in the Lyndon B. Johnson School of Public Affairs at the University of Texas, Austin. He is also a Senior Research Associate at the Unit for the Humanities at Rhodes University in South Africa.

Patel holds degrees from the University of Oxford, the London School of Economics and Cornell University. He previously worked for the World Bank, the World Trade Organization and the United Nations. In 2014, Patel co-taught the Edible Education course at UC Berkeley with Michael Pollan. In 2016, he received a James Beard Foundation Leadership Award for his scholarship and advocacy work promoting justice and equality in our food system.

He writes regularly for The Guardian and has contributed to numerous publications including, the Financial Times, Los Angeles Times, New York Times, Times of India, The San Francisco Chronicle, The Mail on Sunday, and The Observer. Additionally he has written five books. His latest, A History of the World in Seven Cheap Things, co-written with Jason W. Moore, explores the seven things that have made our world and shape our future, and talks about how making them cheap has devastated our planet.

Raj Patel (RP): When I was five years old, my parents took me to India, and while we sat in a car at a stoplight in the monsoon rain, a girl knocked on the window and begged us for money for food. There was an infant in her arms, whose disfigurement and screaming I could see and hear from the inside of the car, despite the rain sheeting down. Soon, I was crying and screaming, my parents pushed a small clip of rupees out of a cracked window, and then the lights changed and we drove off. When I got back to London, I rented out my kindergarten toys, and sent the money to Oxfam. Much of my work since then has been to figure out whether there was any good reason why we were inside the car and they were outside the car. I haven’t found any good reasons, but have found plenty of bad ones.

FPC: It seems that all the news we’re hearing these days is negative. And then we start hearing statistics indicating that there will be more plastic than fish in the sea by 2050 and that we are nearing a point of irreversible climate change and need to make serious changes in greenhouse gas emissions before it’s too late. All this leads some people to feel paralyzed and wonder where even to begin. What would you say to someone who feels that way?

RP: If you feel this way, you’re paying attention and putting together the occasional reports in the media. But what’s reported far less is that there are groups around the world with ideas to confront climate change, and capitalism, whose ideas work. Mark Twain’s line, about there being nothing more frustrating than a good example, remains true. There are thousands of good examples, in the US and beyond, that can frustrate our paralysis and pessimism, if only we let them.

FPC: Can you explain the relationship between the concept of ‘anthropocene’ [man-centric] and capitalism, and also how this impacts our food system?

RP: Readers may be familiar with the idea of the Anthropocene, the name for the geological era in which we now find ourselves, which will be marked in the fossil record by radioactivity from nuclear weapons tests, the creatures from the sixth mass extinction, plastic, and the trillions of chicken bones that have been spread across the planet because humans now consume 50 billion of these birds a year. The reason it’s misleading to call it the Anthropocene is that the word means ‘human era,’ and not all humans are responsible for this era. There are, even today, hundreds of civilizations of humans that haven’t driven the sixth mass extinction. Indigenous communities, according to one report in the Proceedings of the National Academy of Sciences, can do a far better job of managing resources than either the private or public sector. There’s only one civilization system that has brought about the Anthropocene, and it’s capitalism. Better to name it the Capitalocene, not just so we can ascribe blame properly, but so that we can diagnose and then treat the problem too.

FPC: In your most recent book that you co-wrote with Jason Moore, A History of the World in Seven Cheap Things, the publisher had the following on its website: “Nature, money, work, care, food, energy, and lives: these are the seven things that have made our world and will shape its future. In making these things cheap, modern commerce has transformed, governed, and devastated Earth.” We were wondering, (and we realize you’ve written an entire book on this topic), what we can do to avoid this impending doom in our food system? How do you get the entire world to pay attention? What should/could each one of us be doing to have an impact?

RP: We do spend a fair bit of time in the book on the struggles – past and present – that have helped to shape the food system for the better. More than anything, though, we argue that the movements that point us away from catastrophe are ones that pay attention to class, race, gender, ecology, history and nature. Movements like the international peasant movement, La Via Campesina. Movements like the Movement for Black Lives. Even branches of the union movement are taking seriously the simultaneous predations of capitalism around climate, labor and care work. What’s the most powerful thing we can do as individuals? Stop being individuals and join a movement that puts these ideas of food justice at their heart.

FPC: Is there a city, town, area, community that is doing food “right” – meaning a food system that is working and could be used as a model (also please define what you think is “right”) ?

RP: I’ve been following the work of folks like Malik Yakini at the Detroit Black Community Food Security Network or the activists and academics at the Soils, Food and Healthy Communities project in Northern Malawi for years now. In their systemic approach to food and power, they understand that the problems of the food system can’t be solved simply by farming better. They can only be solved by systemic changes in the way power is distributed. And these groups are working to make sure that distribution is far more equal than it has ever been.

FPC: Clearly, poverty is a major cause of hunger, but since we’re not solving poverty right now, what can we do in the meantime? And does taking these “interim” steps just obfuscate the overriding issue of poverty? What do you think are the most promising strategies for reducing hunger and fixing our food system? And what can people reading this do right here right now to help?

RP: Although the question ‘how can I help?’ seems benign, imagine it being said in this context: some muscled up wanker is beating the hell out of an unsuspecting pensioner, with every punch in the face preceded by “how can I help?”. The US government is facilitating poverty, making it hard for millions of Americans to survive it. Anyone wanting to help has to recognize that we have let this happen, that we have a collective culpability for the production of poverty at home and abroad, that we have to organize to stop it.

FPC: You previously worked at the World Bank, the World Trade Organization and the United Nations, and you’ve been an outspoken critic of all three since then. What do you think these agencies could be doing differently to actually move the needle on some of the major human rights and food system issues we are currently experiencing? Is it even possible? Why or why not?

RP: No, neither the Bank nor the WTO are the appropriate vehicle for rights, because that’s not what they were designed for. Sure, you can try to use a rifle as a desk lamp, but it’s generally going to end badly because lamps and guns are designed for different purposes. The Bank was designed as a mechanism to consolidate US strategic objectives at the end of WWII and the WTO emerged out of a process in which its predecessor, the General Agreement on Tariffs and Trade, was explicitly chosen instead of an International Trade Organization, at which worker’s rights would have played a part. In an ideal world, the Bank would both forgive its loans, and pay reparation for the damage it has caused. But getting to that ideal world is the hard part, isn’t it?

FPC: What is the one food policy change at the federal level that would have the greatest impact on alleviating hunger throughout the country?

RP: There isn’t one key to unlocking the food system. How could there be? It’s vital to raise wages not just for food workers, but for those on whose care work they depend. It’s important to protect workers, consumers and the environment from pesticide exposure and to recognize the importance of agroecology for climate change. It’s important to ban the marketing of ultraprocessed food to children, and to end subsidies to commodity agriculture, to stop animal exploitation and the socialization of the cost of the food system. Pick one. And then think about your theory of change to make that happen. All of these policy changes are too big to happen without substantial organizing for *all* of them to happen. So let’s organize for all.

Grew up in: London, UK
City or town you call home: Austin, Texas
Job title: Research Professor, Lyndon B Johnson School of Public Affairs, University of Texas at Austin
Background and education: BA University of Oxford, MSc London School of Economics, PhD Cornell University
One word you would use to describe our food system: Capitalist
Food policy hero: Malik Yakini
Your breakfast this morning: Last night’s pizza.
Favorite food: Mushrooms!
Last meal on Earth: With family and friends and probably too much to drink.

Book you can’t put down: The Overstory by Richard Powers

June 17, 2022
Subscribe To Weekly NYC Food Policy Watch Newsletter
Subscribe to our weekly email newsletter today to receive updates on the latest news, reports and event information
We respect your privacy. Your information is safe and will never be shared.