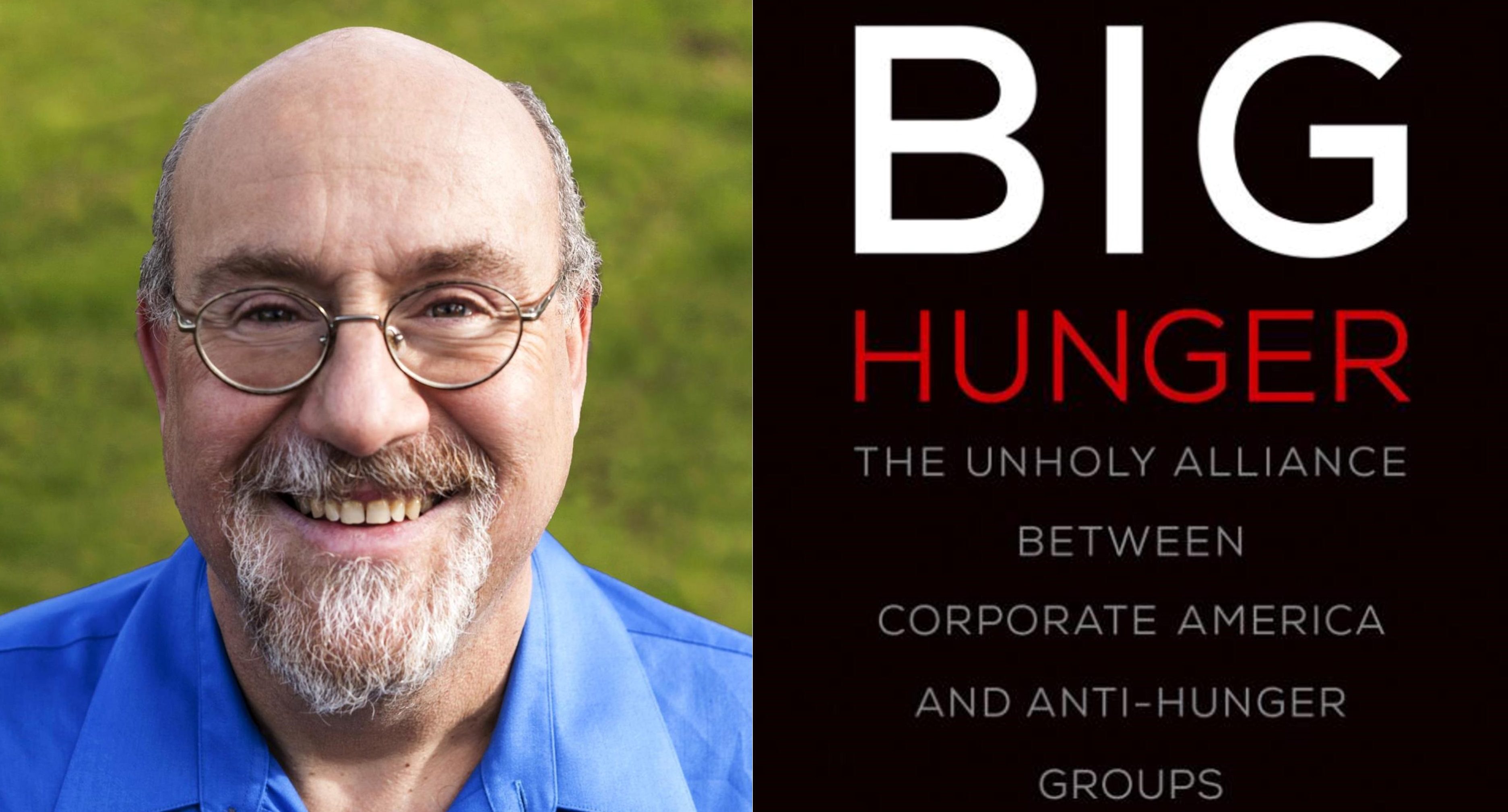 Andy Fisher is the former Executive Director of the Community Food Security Coalition (CFSC), author of Big Hunger, food security activist, NGO consultant and has worked as an adjunct professor at various universities in Oregon. He founded and directed the Community Food Security Coalition (CFSC), a national alliance of hundreds of groups working on urban food access and local food. In 2017, Fisher wrote, Big Hunger, describing it as the “launch for a new vision for how to untangle corporate interests from interests from food banks and the anti-hunger movement.”

Food Policy Center (FPC): What inspired you to write a book about the relationship between corporate America and anti-hunger groups?

Andy Fisher (AF): The 2008 Farm Bill provided me with first hand experience of how the relationships between DC-based anti-hunger groups and agribusiness impeded the reform of farm policy. I saw anti-hunger groups embracing Walmart as a generous donor while ignoring the blatant harm the company was doing to r its workers’ food security through low wages and exploitative labor practices. I saw how DC-based groups were taking soda company donations and lobbying with them to protect their ability to continue to sell billions of dollars of soda in the SNAP program. At the same time, I saw obesity and diabetes rise to historic levels. I saw how income inequality increased and food insecurity rates stagnated at best. It was evident that corporate America, especially in the food and beverage business, was responsible for much of this harm, yet the anti-hunger community cynically treated them as valued partners because of their lobbying clout and philanthropic donations. Once I left the Community Food Security Coalition in 2011, I was able to raise many of these concerns in a more concerted and visible fashion than I could have while at CFSC.

FPC: In your book, Big Hunger, you argue that anti-hunger efforts don’t succeed if they’re focused on charity and not on eradicating the root causes of food insecurity, improving public health and reducing income inequality. Can you explain briefly?

AF: Let’s look through the lens of disaster relief to understand this point. After Hurricane Maria wiped out Puerto Rico in 2017, FEMA, the Red Cross and other agencies went to the island to provide disaster relief. They brought food and water, rebuilt destroyed buildings and roads, and stabilized communities. That phase of relief is generally intended to last a short and defined period of time, perhaps six months or even a couple of years. To think that thirty-five years later we would still be feeding Puerto Ricans as part of hurricane relief is absurd. Disaster relief turns into development work—such as building human and social capital, improving schools, creating new industries and sustainable sources of energy, and improving agricultural yields while protecting the environment.

Yet, throughout the US, we have continued down the disaster relief path through our emphasis on food banking. Since the early 1980s, when food banking took hold, its reach has grown exponentially to serving 40 million people and we brag about how many billions of pounds of food we distribute annually. Thirty-five years later we are still treating hunger in America as if it were a natural disaster to which boxes of free food is the solution. Food distribution only feeds people; it does not  resolve the broader inequities that cause hunger. Frankly, food distribution only perpetuates the hunger problem by diverting attention, political will and resources away from systemic solutions. Hunger is not caused by a shortage of food but by a lack of resources (i.e. The money) to acquire food. Racism, misogyny, classism are all factors that determine who’s poor and who’s hungry in America. Ultimately, those who are hungry are those without political power. Shouldn’t the emergency food system be part of a broader movement to, in the words of the Irish playwright Oscar Wilde, “try to reconstruct society on such a basis that poverty will be impossible?”

FPC: You’ve spent many years working to fight hunger. Were there aspects of the emergency food system that surprised you? If so, in what ways?

AF: On the one hand, I was surprised by the racism inherent in the emergency food system. As a white volunteer at a food pantry, I become ensnared in the toxic charity trap, acting as a security guard to make sure the clients, often people of color, did not take an extra bag of spaghetti or package of hamburger.

On the other hand, I have been inspired by innumerable food bank and pantry staff who are so committed to the communities in which they work, who are incredible community organizers, and who are reinventing the emergency food system in real time. The Community Food Bank of Southern Arizona is a wonderful example of this phenomenon.

FPC: In your book, you talk about a self-perpetuating “hunger industrial complex.” What are the significant factors that contribute to this cycle?

AF: The hunger industrial complex is when Walmart donates millions to anti-hunger groups for outreach programs to increase the number of eligible persons receiving SNAP, while redeeming one out of every five SNAP dollars, more than $10 billion last year. It’s when a food bank in a red state refuses to fight for SNAP or a higher minimum wage because its largest corporate donor has threatened to pull its funding if it goes down that path. It’s when the Food Research and Action Center advocates for more people to be able to use their SNAP benefits at Taco Bell and KFC, because their advocacy builds a stronger base of support for SNAP. It’s when food banks gratefully accept tens of thousands of pounds of excess pork produced in Smithfield factory farms, the sites of lawsuits by multiple low-income rural communities of color in North Carolina, who claim to have been poisoned by the toxic fumes from hog manure lagoons.

A few factors drive this complex. First, anti-hunger groups see business, especially i the food industry, as a core partner, with greater political and economic clout, that can help them keep the Right at bay from cutting nutrition programs. Second, the urgent character of the hunger framework (people have to eat every day) necessitates pragmatic but short-term solutions. The pragmatism of anti-hunger advocates has led them away from controversial social change strategies toward a more middle of the road social service approach. Historically, they  have underemphasized the long-term effects chronic diseases, such as obesity and diabetes, have on their constituents while focusing on the acute impacts of food insecurity. This is evolving, but their relationships with industry are slow to change. Finally, the anti-hunger sector provides real economic value to those in the food industry. It helps them dispose of excess products, but, more importantly, it burnishes their reputation as responsible entities, thus enhancing their stock value and employee and consumer loyalty.

FPC: You also write about how a broader definition of hunger that encompasses public health, economic justice and economic democracy can create a better understanding of how to fight hunger rather than just managing it. What do you think are the most promising strategies to reduce hunger? Why?

AF: I like the work of Witnesses to Hunger, which brings attention to the leadership of low-income women of color in the hunger movement. I believe that if the leadership of the anti-hunger field weren’t populated by professional class white men (like myself) the issues it addressed and approaches it took would be quite different.

I see the Canadian group Freedom 90 as a fantastic model of how food pantry volunteers can be organized toward political action. There are millions of people in the US who volunteer at food banks and food pantries every year, and who would be a huge force for social change if mobilized.

The California-based Center for Good Food Purchasing has helped city government and school districts in such places as Los Angeles, Oakland, and Chicago implement purchasing policies for their cafeterias and feeding programs that prioritize healthy, sustainable, local foods produced with high labor standards. It holds enormous promise to bring together labor, environmentalists and foodies in a coalition around the wise use of public funds.

FPC: What is the one food policy change at the federal level that would have the greatest impact on hunger?

AF: My goals are not just to reduce hunger but also to create a more democratic food system and equitable economy. In that light, policy changes that redirect the $85 billion spent on federal food programs away from agri-business and towards investments in the solidarity economy and locally owned businesses would have an enormous impact on democratizing the food system, more effectively reducing poverty and generating wealth for impoverished communities.

FPC: Your next writing project?

Grew up in: Youngstown, Ohio

One word you would use to describe our food system: Opaque

Your breakfast this morning: Goat milk yogurt, nuts, blueberries we picked yesterday at a local farm

March 9, 2021
Subscribe To Weekly NYC Food Policy Watch Newsletter
Subscribe to our weekly email newsletter today to receive updates on the latest news, reports and event information
We respect your privacy. Your information is safe and will never be shared.