8 Commercial Urban Farms in NYC (And Where You Can Enjoy Their Harvest!) 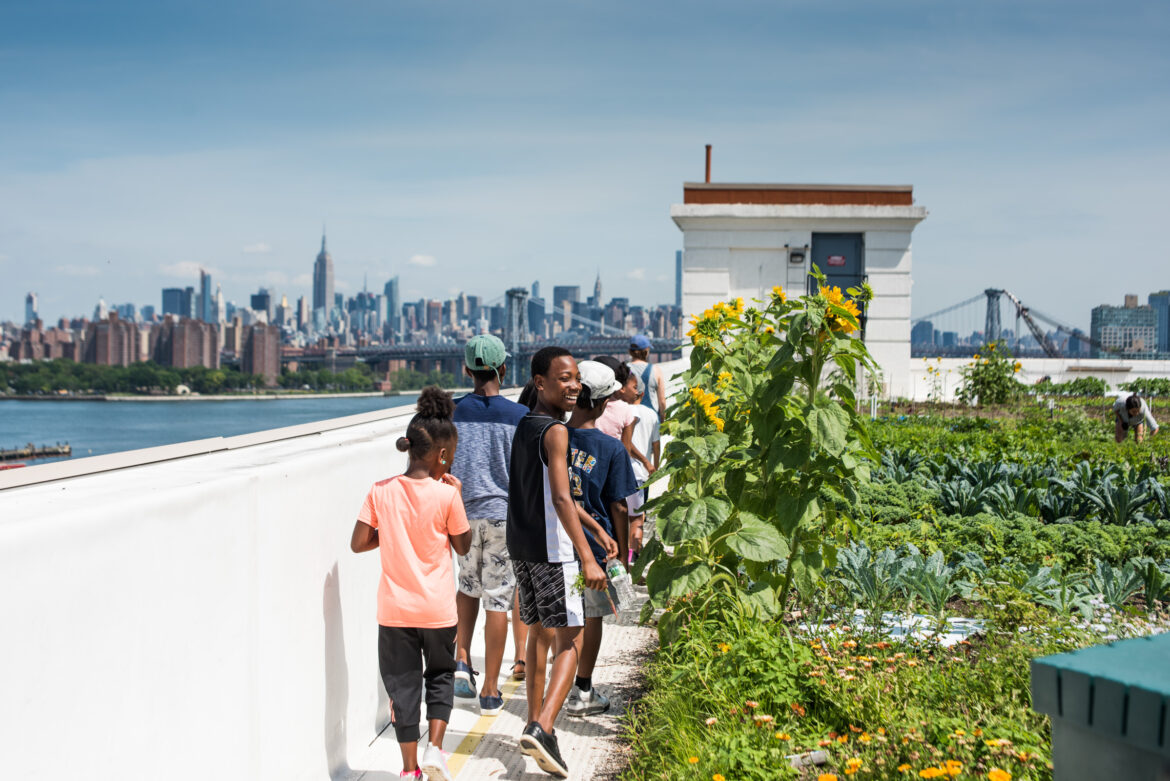 In the past fifteen years, New York City has become a hotbed of technological innovation in the urban agriculture sector and home to hundreds of community gardens bringing fresh produce, greenspace, and education to New Yorkers of all ages. There is however, far less commercial agriculture based in the city. In order to better support these resources, Mayor Eric Adams has created the Mayor’s Office of Urban Agriculture, appointing Qiana Mickie as its chair, in September 2022. This new office will strengthen the role of urban agriculture (both community gardens and private companies) to promote a more sustainable and local food system in NYC. To learn more about where you can get fruits, vegetables, and more grown within the five boroughs, check out the following eight companies making impressive strides in the urban agriculture sector.

Brooklyn Grange
Founded in: 2010
Location: Brooklyn Grange has three rooftop farms located in Sunset Park, the Brooklyn Navy Yard, and Long Island City. The two farms in Brooklyn offer tours, workshops, and private events. Brooklyn Grange also operates, but does not own, the rooftop farms at the Javits Center, Rosemary’s Restaurant, and the Nicotra Group Office Building in Staten Island.
Technology type: Rooftop organic soil farming and hydroponics
Crops: More than 100,000 pounds of produce annually, including leafy greens (such as lettuce, kale, and chard), root vegetables (such as radishes and carrots), fruiting vegetables (such as peppers, tomatoes, and gourds), flowers (such as sunflowers, echinacea, and nasturtium), and more. They also have various hot sauces made with hot peppers grown on the farms.
Where you can purchase: During the primary growing season (spring, summer, and early fall), you can purchase their items directly at their rooftop farm in Sunset Park on Sundays, or at the McGolrick Park farmers’ market in Greenpoint, Brooklyn. Additional retailers that sell their products include Fresh Direct, Local Roots, Farm to People, Natoora, Foster Sundry, and The Meat Hook.
Learn more:

Square Roots
Founded in: 2016
Location: Their first farm is located in Williamsburg, Brooklyn, but they have also opened facilities in Grand Rapids, Michigan, Kenosha, Wisconsin, and Springfield, Ohio.
Technology type: Vertical farming in repurposed shipping containers.
Crops: Herbs (such as basil and cilantro), as well as leafy greens that are sold as prepackaged salad mixes.
Where you can purchase: Square Roots produce can be purchased at various supermarkets throughout the city, including Morton Williams, Foodtown, Whole Foods, and Westside Market.
Learn more:

Gotham Greens
Founded in: 2011
Location: Gotham Greens owns two rooftop greenhouses in Brooklyn (in Greenpoint and Gowanus) and one in Jamaica, Queens. Outside New York, they also own and operate greenhouses in California, Colorado, Georgia, Illinois, Maryland, Rhode Island, Texas, and Virginia.
Technology type: Rooftop greenhouses and hydroponics
Crops: Primarily salad greens and herbs. They also sell dips, dressings, and sauces made from their produce.
Where you can purchase: Gotham Greens products are sold at various supermarkets throughout the city, including Key Foods, Foodtown, and Shoprite.
Learn more:

Sky Vegetables
Founded in: 2013
Location: Their 8,000 square foot greenhouse is located in Morrisania, the Bronx, atop Arbor House, an affordable housing development.
Technology type: Rooftop greenhouse and hydroponics
Crops: Primarily  leafy greens and common herbs (such as cilantro, rosemary, and basil), but they also grow some specialty herbs (such as lemongrass and Syrian oregano) and can take some special requests from customers for specific crops.
Where you can purchase: Some Sky Vegetables produce can be purchased through Fresh Direct, but the company also sells to restaurants and retailers throughout the city.
Learn more:

Smallhold
Founded in: 2017
Location: Williamsburg, Brooklyn.
Technology type: “Minifarms” — climate-controlled growing chambers
Crops: Various types of edible mushrooms, including oyster, shiitake, maitake, and lion’s mane. They also sell grow kits people can use to grow their own mushrooms at home.
Where you can purchase: Smallhold mushrooms are available in retail stores and restaurants across NYC (and beyond). Additionally,  through a partnership with Brooklyn Grange’s CSA (Community Supported Agriculture – see HERE), members can pick up weekly shares of mushrooms during the CSA season.
Learn more:

Upward Farms
Founded in: 2013
Location: East Williamsburg, Brooklyn.
Technology type: Aquaponic system — the waste from farmed fish is broken down by soil bacteria, and plants consume the resulting nutrients.
Crops: Microgreens (very young vegetables harvested after only 7 to 10 days) and a hybrid varietal of striped bass.
Where you can purchase: Microgreens are available at select Whole Foods and Westside Market locations, and the fish are available at Greenpoint Fish and Lobster.
Learn more:

Eagle Street Rooftop Farm
Founded in: 2009
Location: The farm is on the roof of Broadway Stages, a film and television studio production company in Greenpoint, Brooklyn.
Technology type: Rooftop organic soil farming
Crops: Fruiting vegetables (such as peppers, cucumbers, and eggplant), leafy greens (such as spinach, arugula, and kale), herbs (such as dill, cilantro, and tarragon), and flowers (such as zinnias, calendulas, and hops). Hot peppers grown at their farm are also used to create a hot sauce that is sold year-round.
Where you can purchase: Restaurants in North Brooklyn, including Alameda, Achilles Heel, Marlow and Daughters, Rockaway Taco, Ovenly, Eastern District, Eat, Archestratus Books + Food, Littleneck Outpost, and Paulie Gee’s. During the growing season (spring, summer, and early fall), customers can purchase produce directly from their farm on select weekends.
Learn more:

Rabbit’s Garden
Founded in: 2019
Location: Urby Apartments in Stapleton, Staten Island
Technology type: Soil-based regenerative agriculture.
Crops: From June to October they grow many different types of vegetables, from arugula and cucumbers to mizuna and chrysanthemum greens.
Where you can purchase: Rabbit’s Garden produce is available through a CSA Farm Share membership that runs from June through October.
Learn more:

Food Policy for Breakfast: A Conversation with Dr. Marion Nestle

December 4, 2018
Subscribe To Weekly NYC Food Policy Watch Newsletter
Subscribe to our weekly email newsletter today to receive updates on the latest news, reports and event information
We respect your privacy. Your information is safe and will never be shared.