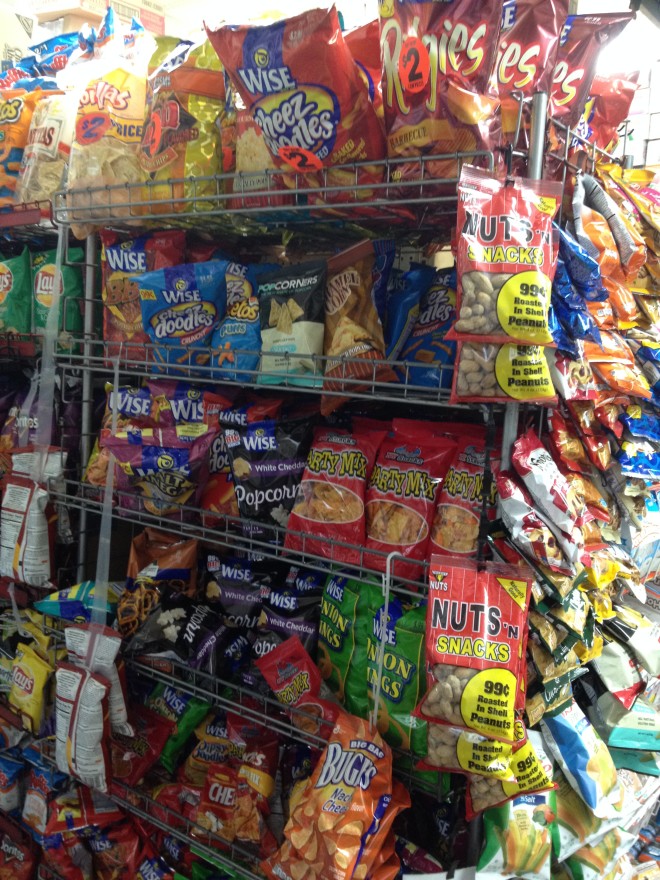 The East Harlem food environment has been described  as unhealthy and dominated by small corner stores, also referred to as bodegas. These small retail stores often do not sell produce and are saturated with foods that are high in fat, sugar and salt and low in nutritional content. Bodegas have become a primary focus of intervention in New York City and nationally, as communities strive to address issues of access and improve the availability of fresh produce in low-income communities. Several retail level initiatives exist in NYC, such as Shop Healthy, that works to improve the availability of affordable produce in bodegas. Initially, we were interested in examining barriers and facilitators to the implementation and sustainability of the Shop Healthy initiative in East Harlem. However, we soon discovered that Shop Healthy is not yet present in East Harlem and we were not able to identify any other similar retail level initiatives in the area. We then considered shifting the focus of our project to take on more of an advocacy role, however an informal examination of the area revealed that there were several supermarkets in the area as well as green carts and small retailers that sold fresh produce. Our observations suggested that the East Harlem food retail environment was quite dynamic and sparked our interest in working to better understand and characterize food retail assets in the community.

Our group conducted community research through food retail assessments as well as qualitative interviews. We identified a geographic area within East Harlem to serve as the focusof our food retail assessments investigation. This 30-block area spans from 102nd street to 117th street between Lexington Avenue and Second Avenue. The area was chosen because of the large number of housing projects located within. There are 4 New York City Housing Authority (NYCHA) housing projects located in this area including the Gaylord White Houses, Governor Dewitt Clinton Houses, James Weldon Johnson Houses, and President George Washington Houses. Research has shown that many residents of public housing often live below the federal poverty line and have higher rates of chronic illnesses than higher-income adults. We determined that it would be especially critical to examine the food environment and resources available in this geographic area. The area was divided between the four group members, with each group member responsible for a 6-8 block area. Businesses on both sides of the block were visited.

Interviews were conducted with a variety of individuals who have extensive experience with retail level interventions to expand access to healthy foods in low-income neighborhoods. Each individual provided a unique perspective on the issue of using bodegas as a platform to expand access to healthy foods. In a phone interview with the Brownsville Project Coordinator from Greenmarket Co., she described that a big hurdle in selling fresh produce at bodegas is that most bodega customers frequent bodegas to pick up quick snacks, not to buy their produce and groceries. She suggests that value-added actions like selling cut fruit cups has the potential to help bodegas sell more fresh produce. Shop Healthy is a program in New York City that works with residents, food retailers, and distributors in order to increase the availability of healthy foods in corner stores. Shop Healthy does not have any programming in East Harlem. This interview led us to reassess our understanding of the East Harlem food environment and think about how existing assets can be leveraged. In addition, we assessed 51 retailers within the identified geographic area from 102nd to 117th St between Lexington and Second Avenues. Of these 51 retailers, there were 30 bodegas, 11 grocery stores, 5 green carts, 4 supermarkets and 1 farmer’s market. Using the BMI scale adapted from the Healthy CUNY team, we identified that 43% of the retailers fell within the BMI healthy category, 20% of retailers were classified BMI intermediate and 37% were considered BMI unhealthy. None of the retailers carried frozen fruits or vegetables. We rated the quality of the available produce for 26 stores. Produce was mostly rated average or good, with only a few stores with poor quality. Our additions of whole wheat bread and canned vegetables altered the BMI healthy list. A number of retailers carried canned vegetables and it seemed to influence bodega classifications more than the whole wheat bread. Price data we collected was sparse and not sufficient enough to inform any findings.

We specifically chose to focus on a select geographic area around 4 public housing projects because research has shown that residents often suffer from high rates of chronic, diet-related diseases. Through our research, we were able to identify 9 food retailers that sell predominantly healthy food items and produce (food oases) within close proximity to large public housing developments. A valuable next step would be to work to promote greater awareness and utilization of these nine food oases in the East Harlem community, but specifically within the housing developments. Additionally, the food oasis/balanced/swamp scale provides a realistic continuum for growth in retail initiatives. Once stores are identified as food oases, balanced, or food swamps, public health initiatives should be established to move stores up to the next level on the continuum of the scale. Food swamps could turn into balanced stores, while balanced stores could turn into food oases. The food oasis/balanced/swamp scale provides a useful framework for defining interventions with retailers. A program with measurable impact would need to change the landscape of food choices available to consumers, while also strengthening connections to the retail assets (food oases) that already exist in East Harlem.