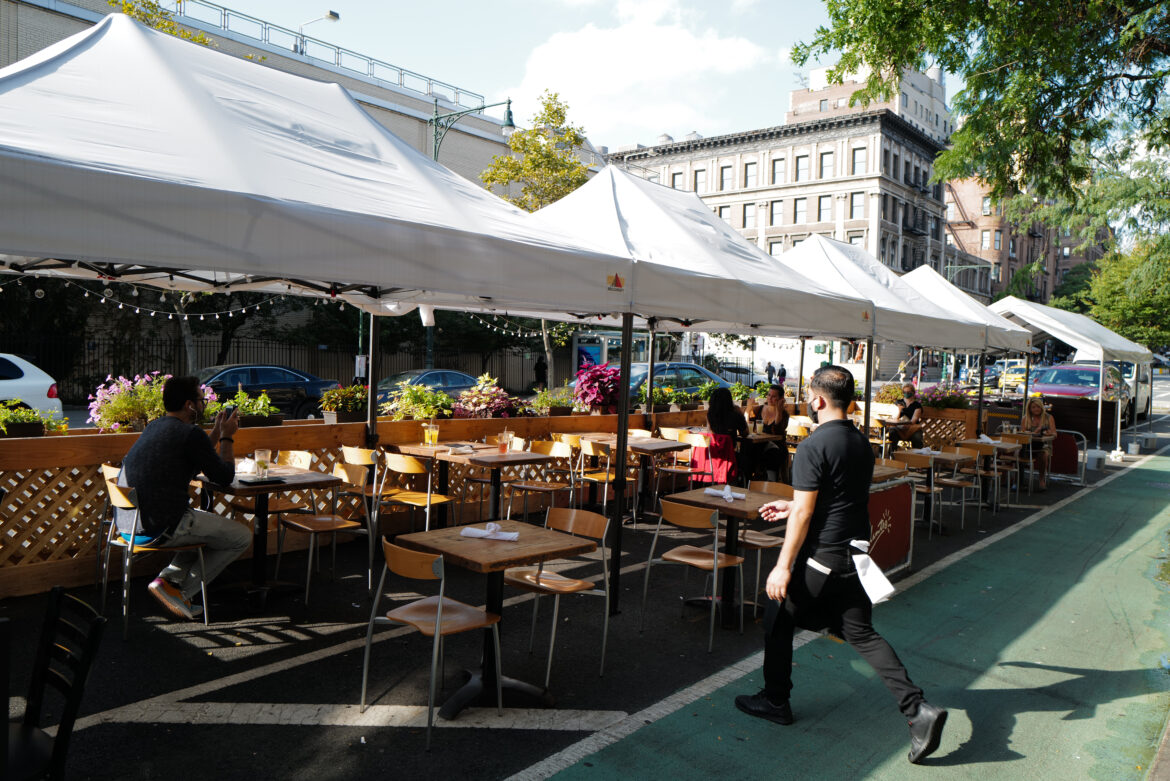 The COVID-19 pandemic led to major shifts in the way businesses, especially restaurants, operate; not the least among these changes is the expansion of outdoor dining onto sidewalks and into the street. The program is called Open Restaurants, which are similar to the Sidewalk Cafés that predated the pandemic. Since it began last year, this extended outdoor dining space has proved to be immensely popular with both restaurant guests and owners. With full capacity indoor seating now allowed and no end to Open Restaurants in sight, many restaurants can now serve more guests than they could before the pandemic. Plus, the fresh summer air will understandably lead many New Yorkers to seek out al fresco dining in the coming months.

Outdoor dining during the pandemic

In the summer of 2020, NYC began the Open Restaurants and Open Streets programs that gave restaurants more space to provide outdoor dining service. This was especially valuable for restaurants that did not previously have outdoor seating. In the beginning, some restaurants constructed elaborate shelters on the sidewalks and shoulders in front of their building. These structures often drew criticism on social media, because they frequently looked like little buildings of their own, complete with doors and windows. Many did not technically abide by the guidelines set by the City, as they did not have at least two open sides, but enforcement of this rule was scant. The NYC Office of Nightlife and Small Business Services has stated that enforcement is “primarily complaint driven.”

The winter season was especially difficult for restaurants, as Governor Andrew Cuomo banned indoor dining entirely in December of 2020. Some restaurants did not even attempt to provide outdoor service during the colder months, but others got creative: heated single-table structures and tents appeared in front of establishments seeking to continue tableside service. Mayor Bill de Blasio also expanded another program called Open Storefronts to include restaurants and bars selling takeout.

The business of dining outside

During the summer of 2020, when they were just beginning to construct outdoor dining facilities, restaurant owners were placed in the difficult position of having to either invest thousands of dollars into building sidewalk and/or curbside structures, or go out of business. Making that kind of financial commitment was a major hurdle for many small restaurants.

In addition, buildings with appropriate curbside space are now more desirable to restaurateurs, which could potentially alter the value of these storefronts and push out small businesses that cannot afford a higher rent. And while the city is not currently charging restaurants for the space they use on sidewalks and streets, this could well change. The Sidewalk Café program requires restaurant owners to pay multiple fees, and, given the similarity of that program to Open Restaurants, it is certainly possible that the city might begin charging businesses for their outdoor space when the pandemonium of reopening dies down.

Finally, with the return of full-capacity indoor dining and the addition of curbside and sidewalk patios, restaurants will need to hire more staff to accommodate the increased number of customers. Food service, however, is still facing a staffing shortage, with many establishments unable to hire or retain a consistent workforce, which may mean paying higher wages in order to find adequate staff.

In the summer of 2020, under the auspices of the Open Streets program, some streets were explicitly made open to outdoor dining, which had previously been limited to sidewalks and curbside patios. These streets aren’t permanently closed to vehicular traffic: cars are generally allowed back on these streets overnight. Restaurants therefore must remove their outdoor tables by a certain time each evening.

In April 2021, the City Council passed a bill (39-8) to make the Open Streets program permanent, and the bill was signed by Mayor de Blasio in May. The program is overseen either by the NYC Department of Transportation or by individual community organizations and partners. But the program is not without critics: in car-dependent communities where public transportation options are limited, closing off streets causes trouble for residents who need to find alternate routes in their daily travel routines. In denser communities, curbside structures can also cause even more traffic congestion than the city already had.

Future of outdoor dining, considering the change in NYC leadership

The future of outdoor dining in New York City is unclear. In September 2020, Mayor de Blasio announced a move to make the current outdoor dining regulations permanent; however, the new administration that will begin in 2022 is not guaranteed to be so supportive. Governor Cuomo signed an executive order allowing restaurants to set up on sidewalks and streets to continue for another year, but the practice still will have to be addressed again next year. New Yorkers have grown accustomed to the option of outdoor dining year-round, and restaurant owners have invested a large amount of time and money into creating a comfortable al fresco environment for customers (who doesn’t want to win an Alfresco Award?). Ending such a popular program would be difficult for a brand-new Mayor to accomplish without drawing criticism.

That said, however, they also create very real problems. An estimated 8,550 parking spaces (approximately .3% of the total amount of spaces) across the city have been repurposed for al fresco dining. Some New Yorkers, especially those who live above restaurants with curbside patios, complain about the increased noise and decreased street sanitation. And the Open Restaurants program is not free from the inequities that already plague the NYC food system—the ten community districts with the lowest number of restaurants with outdoor seating have higher rates of poverty and more non-White residents than the ten community districts with the highest number of restaurants with outdoor seating.

The COVID-19 pandemic forced the restaurant industry to get creative with constantly-changing safety guidelines, and restaurateurs have proved that they can be flexible. Are curbside sheds here to stay? That remains to be seen, but one thing is certainly true: expanded outdoor dining has fundamentally changed the way New Yorkers experience restaurants, whether or not it remains in its current form over time.

Learn more about the story of outdoor dining

October 2, 2018
Subscribe To Weekly NYC Food Policy Watch Newsletter
Subscribe to our weekly email newsletter today to receive updates on the latest news, reports and event information
We respect your privacy. Your information is safe and will never be shared.