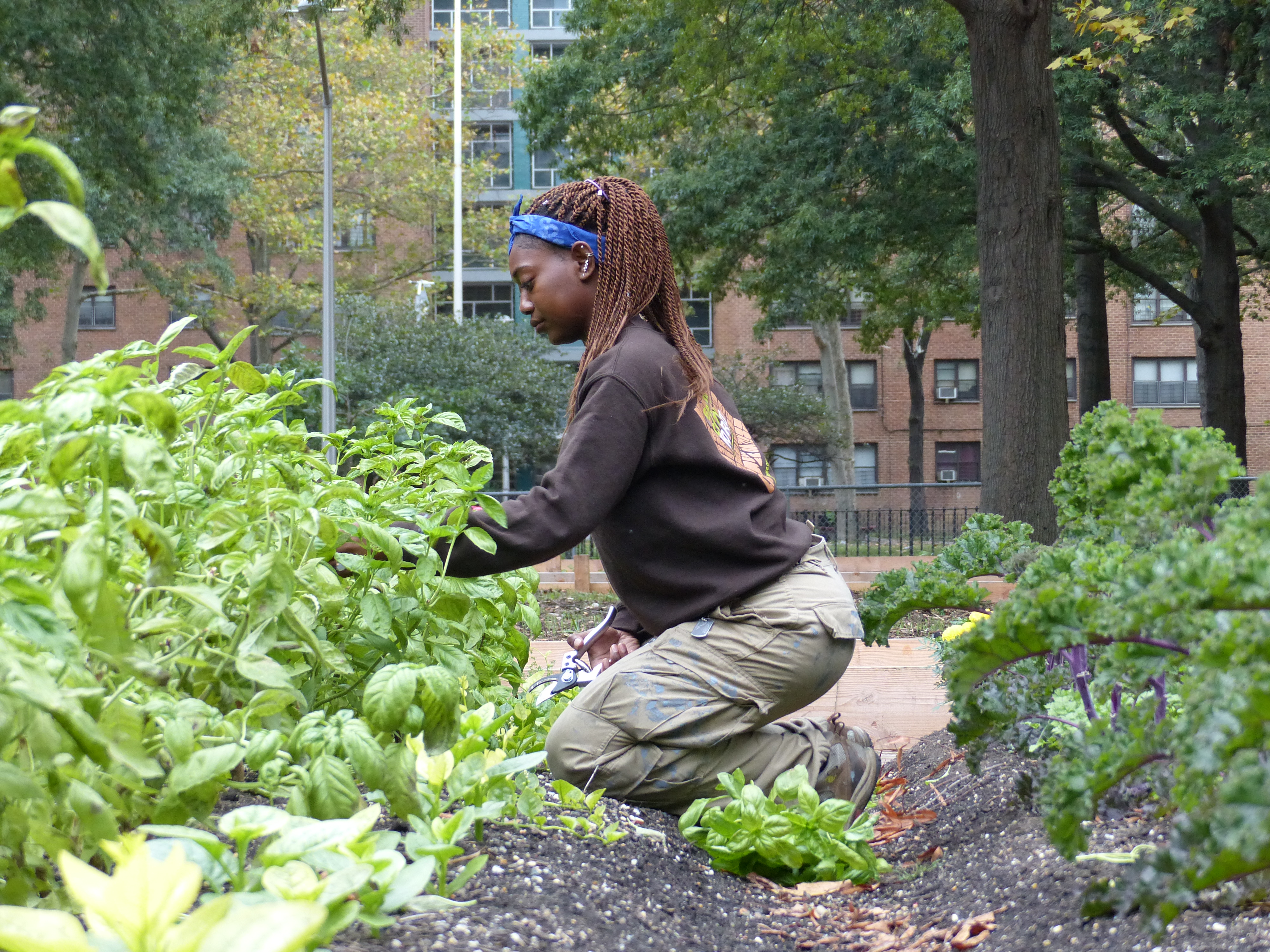 Each morning, 24-year-old Nalijha Trammell rises before the sun for a 7:30 a.m. start to her work day at one of four urban farm sites scattered throughout Brooklyn and Harlem. As a member of Green City Force’s Urban Farm Corps, Trammell works alongside 24 of her peers to develop and maintain working urban farms on New York City Housing Authority (NYCHA) public housing developments in Canarsie, Brownsville, Red Hook, and East Harlem.

Trammell and her fellow 18-to-24-year-old corps members, all of whom are NYCHA residents, work diligently each day on various farming tasks, from planting seeds and weeding gardens to harvesting produce and delivering cooking demonstrations to NYCHA residents.

Besides the Red Hook farm, which was established separately, The Farms at NYCHA were created as part of Building Healthy Communities, a public/private partnership working  to improve community health in underserved neighborhoods across all New York City boroughs.

As a subset of Building Healthy Communities, The Farms at NYCHA aims to increase access to healthy foods while also providing youth leadership and workforce training to corps members, and promoting sustainable public housing communities.

Each week, Urban Farm Corps members host a farm stand at each of their locations to distribute the food they have cultivated and harvested that week. Produce is available to NYCHA residents  free of charge provided they either exchange compost or volunteer some time to help out.

For Urban Farm Corps member Shontanyce Bailey, the farm stand days are a time to see the fruits of her labor, both literally and figuratively. She loves seeing the food distributed to NYCHA residents and finds the process extremely rewarding.

“It’s just the smile and joy we get from the residents, and the support we get that’s so good,” Bailey said. “We’re giving back to the community and it feels really good.”

Like many of her peers, Trammell had never worked on a farm before joining the Urban Farm Corps, but her experience has led to a new-found love for farming and growing her own food.

“I knew it was hard work, but you never know how much hard work until you actually do it,” she said. “Direct seeding and seeing the crops grow from a little seed to a big vegetable is amazing.”

Though she has always enjoyed vegetables, cooking classes offered to Farm Corps members have expanded her palate in a way she never expected, giving her a new appreciation for mixing flavors and vegetables, from bok choy to collard greens.

“It just opened my tastebuds up,” she said, while excitedly mentioning her determination to cook a dish of roast chicken served atop a bed of potatoes and squash that she saw prepared in cooking class. “I keep thinking about that dish.”

Bailey shared similar sentiments on adopting a healthier and more varied diet through her Urban Farm Corps experience. She now eats more vegetables and cooks more frequently for herself and her daughter.

“I always try to use fresh veggies whenever I can at home,” she said.

Farm Corps members certainly aren’t the only ones learning from cooking classes and taking that information home; NYCHA residents are, too.

“There is incredibly positive feedback on the cooking demonstrations that Corps Members lead each week, and [NYCHA] residents frequently informally share their own recipes on how to use the produce,” said Andrea Mata, senior manager for community health initiatives at New York City Housing Authority’s Office of Public Private Partnerships.

So far this year, the Urban Farm Corps has distributed more than 7,000 lbs of food among the four farms. Naomi Johnson, president of the Howard Houses Resident Association in Brownsville, told NYCHA that the Howard Houses farm has been a great thing for the local NYCHA residents.

Initially though, some NYCHA residents were not on board with the farms, corps member Bailey explained. “We had to show them the beauty of it and teach them what we were doing,” she said. “When they saw it was for them they loved it.”

Prior to farm development, NYCHA staff and Green City Force members attend on-site community meetings and other events to survey NYCHA residents and gather input on the design and plan of the farms. They look at everything from farm size to the specific crops people would like to see grown on the farms.

The Farms at NYCHA program was created through a partnership between NYCHA, Green City Force, The Fund for Public Health in New York City, and The NYC Mayor’s Office, and will be funded for at least three years.

The current Urban Farm Corps members will wrap-up their 10-month long urban farming stints in January 2017. A new 36-member cohort of workers, for whom recruitment is currently open, will begin in March. For their service, each Corps member receives a biweekly $500 stipend, monthly MetroCard, and a $5,500 Americorps education grant.

The program is open to any 18-through-24-year-old NYCHA residents with a high school diploma or equivalency. Bahij Chancey, development associate at Green City Force, said the program prioritizes accepting individuals who are unemployed or working jobs without opportunities for advancement.

“The goal is for them to move on to full time jobs with benefits and opportunities for advancement,” Chancey said.

Tonya Gayle, chief development officer at Green CIty Force, shared that the program has a few sources of multi-year government and private funding in place, and will continue to seek out additional funding to establish sustainability over the long term.

“We want the farms to be ongoing and sustainable through community engagement and local management, and long term financial investment,” she said.

Two more NYCHA farms will likely be established by the end of 2018, but final details are still under consideration regarding location.

“Ideally, this will be a model for additional farms to be built on NYCHA developments in the long term,”Gayle said.

September 27, 2016
Subscribe To Weekly NYC Food Policy Watch Newsletter
Subscribe to our weekly email newsletter today to receive updates on the latest news, reports and event information
We respect your privacy. Your information is safe and will never be shared.