A Discussion on Kid Food: The Challenge of Feeding Children in a Highly Processed World 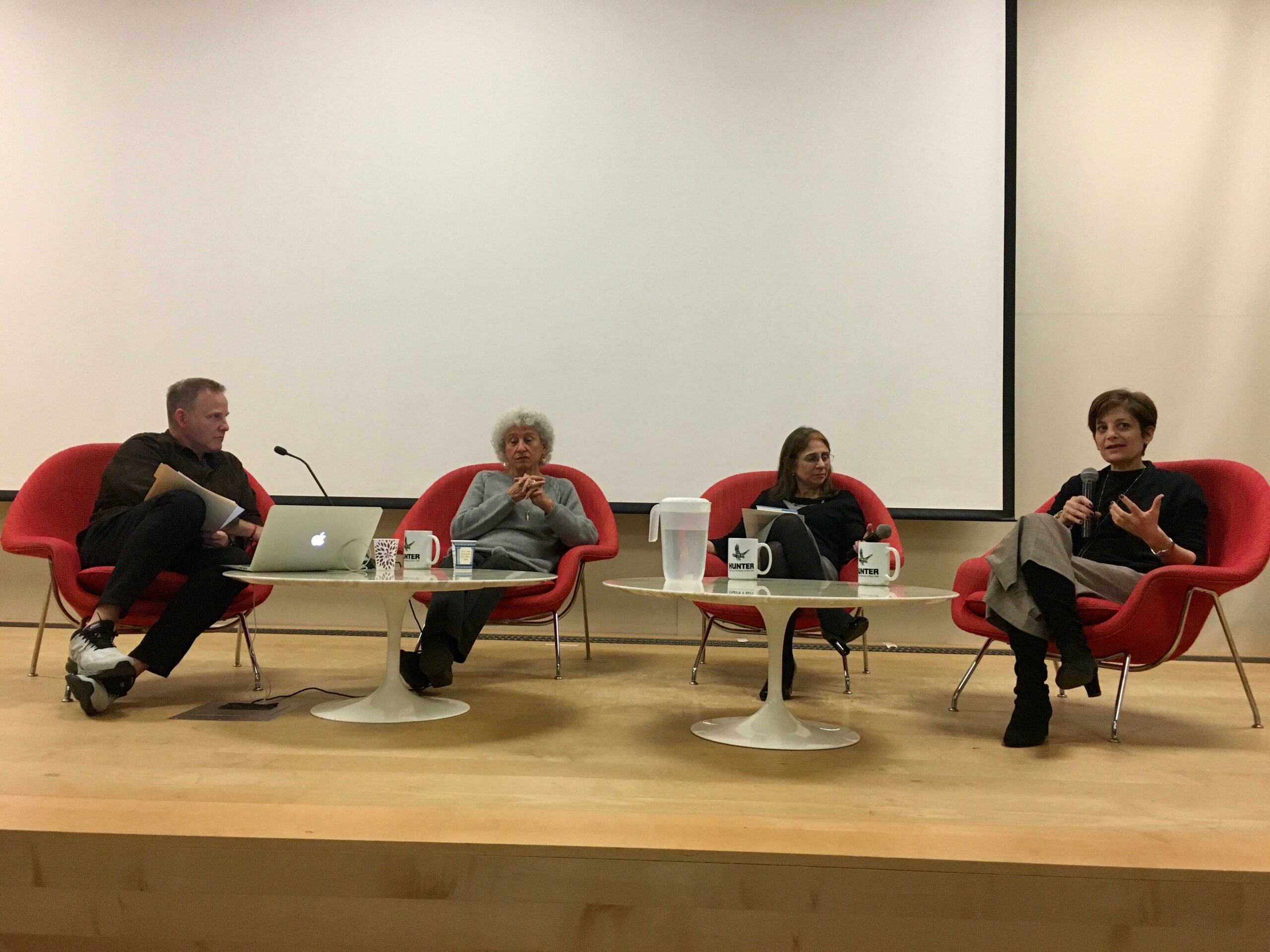 On November 14, 2019, the Hunter College NYC Food Policy Center and the Laurie M. Tisch Center for Food, Education, and Policy hosted a conversation with experts in the world of “kid food” to discuss the challenges of raising healthy eaters in today’s food environment, and the impact of the food industry, advertising and marketing, school food, and policy each have on what children are eating. The panel highlighted parents’ role in feeding their children, defined and identified ultra-processed foods, and emphasized the need for decreasing kids’ access to these ultra-processed and unhealthy foods while increasing their access to healthier, more nutritious food.

If you missed the event, you can watch the recording here.

Dr. Charles Platkin opened the discussion by asking the panelists whether public health advocates were being too harsh in their use of the term “highly processed.” Do these foods belong anywhere in a diet, specifically a child’s diet, he asked? And what is the difference between processed and ultra-processed?

Dr. Marion Nestle was the first to respond, explaining that ultra-processed foods were initially defined by Carlos Monteiro and his colleagues at the University of São Paulo in Brazil, as “those with ingredients that you never find in a kitchen… with lots of added salt and sugar.” Dr. Nestle then went on to say that “the simple way to explain it is that corn is unprocessed and canned corn is processed and has maybe salt added but not much else, and corn chips… are quite a different category.”

She also cited a study done by Kevin Hall at the National Institute of Health in which individuals were put on either a processed or an ultra-processed diet containing the same amounts of carbohydrate, protein, and fat. Those in the ultra-processed group ate on average 500 calories more a day and gained a pound a week. The study defines ultra-processed foods as “formulations mostly of cheap industrial sources of dietary energy and nutrients plus additives, using a series of processes” and containing minimal whole foods. “Something about these foods, the way they taste… [fools] the body into thinking that you’re not full… you can’t eat just one,” Nestle noted. Based on their findings, the researchers suggested that ultra-processed foods might lead to overeating and the development of obesity. Dr. Pam Koch then added that public health advocates are not being too harsh, especially in communities where most of the available food is ultra-processed, and nutrition policy advocates have to do everything possible to change the food environment and food supply so that is no longer the case.

Finally, Bettina Elias Siegel said that ultra-processed foods can have a place in children’s lives, but it does not need to find its place in every part of their lives. She elaborated by stating that one of the major drivers of the notion of “kid food” as a subset of “ultra-processed food” is that we all cling to the idea that kids can’t or won’t eat certain foods or are naturally reluctant to do so. When researching her book, she found that this was not the case and that there are ways to expand kids’ palates, introduce new foods, and tackle picky eating.

She found that the period of time from four to eighteen months is when introducing new foods is most effective for children. After that, the window starts to close and toddlers develop food neophobia when suddenly they’re going to become much more reluctant eaters.”

She believes that arming parents with this information may help them to get kids to eat better and more broadly starting at a very young age. The panelists all agreed that completely eliminating ultra-processed foods is not necessary, but it is necessary to maintain moderation and fix the food supply so that ultra-processed foods are not the easy choice.

Dr. Platkin mentioned that with kids, there’s that ”nag factor.” How are parents supposed to navigate those waters when food companies are marketing to their kids o in such a sophisticated way? How should parents deal with saying no?

Siegel believes that it depends on the child’s age, but as children get older, marketing that pulls them in and leads to nagging can create a great opportunity for nutrition education. Once kids are old enough to understand how advertising works, explaining how they’re being manipulated by the advertisements can be an effective way to empower them to make healthier food choices.

Koch added that Ellyn Satter’s Division of Responsibility is a strategy that allows the parent to feel responsible for choosing what to eat, how to present the food, and where to eat, and also allows the child to feel responsible for how much to eat of what they’re offered. Parents choose the “what” and kids choose the “how much.” This can help parents navigate feeding their children while creating empowerment and autonomy for the kids.

With so much marketing directed to children (including a Baby Shark cereal with 17 grams of sugar targeted at toddlers, as Dr. Nestle mentioned) should junk food marketing be banned?

Very quickly, the panelists unanimously gave a “yes” into their microphones. Nestle brought up two initiatives from Chile: a law that prohibits the packaging of food aimed at kids from featuring cartoon characters and mandates warning labels that highlight the amount of sugar, salt, fat, and calories in food products targeted at children. These labels were focus-group-tested on three-year-olds with aim was for the children to see the boxes and tell their parents not to purchase the food items. Children have been receptive to these labels and since the labels are easy to understand, the children have been able to classify foods as “healthy” or “unhealthy.”

For Koch, the most important thing is for parents to have conversations with their children and explain what the marketing intends to do. She believes that if parents realized that they could have more power over what their children eat, even people don’t want the government to tell them what to eat and what not to eat would be empowered to change what they’re feeding their children.

What has to happen politically for the United States to join other countries in making changes to the marketing of unhealthy and ultra-processed foods to kids?

For Dr. Nestle, it goes back to 1979, when the Federal Trade Commission wanted to stop food marketing to children on television programs and the food industry went to Congress “…and got Congress so riled up” that a law was passed prohibiting the Federal Trade Commission from doing anything to stop marketing to kids. Since then, the legislation hasn’t changed even though childhood obesity has become so prevalent in the country.

After that, Siegel went on to say that during the Obama administration, the Interagency Working Group had attempted to set voluntary guidelines for the advertising of food and drink to kids and it “completely crashed and burned.”

The politics of advertising, are, according to Dr. Nestle, “impossible,” because the government is “captured by corporations.” But Siegel pushed back by suggesting that if parents were mobilized to overcome this challenge, they could use their voices to be heard, the conversation might change.

Why aren’t parents joining the conversation? Are there not enough organized ways for them to join in? Why aren’t things being done?

According to Koch, it’s about showing people that change can happen. People don’t believe they can make a difference and the food system can change, so empowering people enough to make small changes is most important. Once people see small changes, they start to believe that bigger changes can happen. The food space is challenging and only getting more so.

The conversation then turned to food insecurity What are the challenges of trying to get kids to eat healthy in under-served communities?

For Koch, the main priorities are making sure that children in under-served communities have access to healthy foods while also decreasing marketing and advertising. The Tisch Food Center’s Empowered Eaters Report did an assessment of nutrition education programs throughout New York and found that there are many incentive programs, but they all work differently, which can make it difficult for families to those that are available to them. Koch. She believes that in addition to increasing access to healthy foods, decreasing access to ultra-processed foods, we need to make incentive programs much easier for families to use.

Dr. Nestle observed that the same food is served across all schools in New York City, but whether kids eat these meals varies from school to school depending on many factors, including the personal care and training of the cafeteria staff, the length of the lunch periods, and making sure that students have enough time to eat during lunch. The panel clarified that many schools with shorter lunch periods and salad bars that are too high to reach for students without assistance are schools in under-served communities. It’s a matter of making school lunch a priority. It’s hard to make changes when more than a million meals are served every day and food safety is a factor, but Koch strongly believes that change can happen.

As already discussed, a lot of blame for how much processed food our children eat is put on the food industry, but Bettina Elias Siegel argues in her book that the industry isn’t the only cause. What are some of the other factors at play?

Siegel then stated that the food industry is a huge factor, but that there are other aspects of our culture that make unhealthy foods acceptable. Candy is used as a reward, baked goods are rampant in school fundraising. And on that note, Nestle mentioned a study she co-authored that counted the “extra” calories children were given in a day, including birthday celebrations in school, rewards from teachers, etc. The study found that these extra calories added up to 500 a day.

The next question Dr. Platkin asked the panelists focused on whether nutrition education programs are really as uncoordinated as they seem.

Koch mentioned that there are 80 organizations in New York City that are involved in nutrition education, but they are reaching only half the schools throughout the city. There is a strong need to unify these organizations and the funding for these programs, elevate their importance, and make sure that more schools are aware of their availability,  that gardening, cooking, and nutrition education reach more students. Not only does this provide examples and lessons for subjects that are already in the curriculum, but there is evidence that kids who garden and cook have a better attitude towards school and possibly even better attendance on days when gardening is being taught.

The discussion came to a close with praise from Dr. Nestle for Ms. Siegel’s new book as a well-written and fun resource with tools, advice, and well-organized information. Check out Bettina Elias Siegel’s book, Kid Food: The Challenge of Feeding Children in a Highly Processed World for more information on feeding the next generation of healthy eaters.

Food Films and TV Shows to Watch This Winter

November 13, 2019
Subscribe To Weekly NYC Food Policy Watch Newsletter
Subscribe to our weekly email newsletter today to receive updates on the latest news, reports and event information
We respect your privacy. Your information is safe and will never be shared.