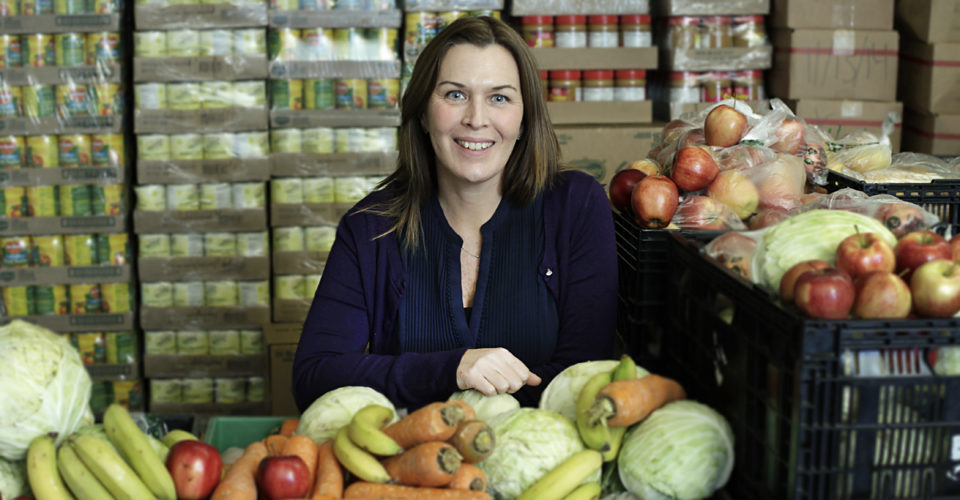 Noreen Springstead began her career with WhyHunger in 1992 working at their front desk. Twenty-four years later, her vision as the Executive Director guides the organization’s marketing strategies and establishes successful philanthropic partnerships. She has built steadfast relationships with notable artists and their record companies through WhyHunger’s Artists Against Hunger & Poverty program, which have resulted in millions of dollars in aid to WhyHunger and other community-based members of their Grassroots Action Network. Noreen’s commitment to making nutritious food a human right by supporting sustainable, community-based solutions to ending hunger defines her work with WhyHunger and their mission.

New York City Food Policy Center (FPC): What inspired you to become a hunger advocate? Was it something in your background? Was there a specific trigger or moment?

Noreen Springstead (NS): I’ve always been on a quest to understand the deep essence of freedom. What does it mean to be free? At a basic human level, the freedom of want as articulated by FDR is among the most intriguing to me and inspiring for my anti-hunger and food justice work especially given that FDR’s Four Freedoms speech inspired the Universal Declaration of Human Rights. I wholeheartedly believe in a human rights framework to advancing social justice for all.

FPC: What drives you every day to work to end hunger and fix our food system?

NS: A desire for all people to be free from hunger with access to bountiful nutritious food is at the core of my drive and that comes from a belief in fairness in the midst of abundance. When workers toil long hours under the hot sun to pick the food for our table and are paid measly wages for a hard day’s work while big corporations profit and the workers go hungry, we know the food system is broken. It’s broken up and down the food chain; from field to truck, from market to table, all the way to food and farm policy in Washington, D.C.

FPC: You have spent your entire professional career at WhyHunger. How has your work evolved and what are you most proud of in your 24 years with the organization?

NS: I began my career at the front desk with a passion and drive to make a difference whether that was improving office infrastructure or influencing programmatic services for greater impact. It has been an adventure that has spanned the globe, giving me firsthand experience at the grassroots level with some of the most extraordinary people who are changing the world, from the bottom up in the fields and at food banks and food pantries. I’ve sat with cabinet secretaries and urged changes at the USDA and other agencies. And, I’ve had the opportunity to work with well-known artists to use their platforms to talk about the great injustice of hunger in our world. Today, I am most proud of the fact that we have honed our strategy and are very intentional about growing a movement grounded in social justice with a human rights framework. I believe people understand that a forty plus year system of feeding is not the solution to hunger and because economic inequality has been so exacerbated and touched so many in the last decade, they are more in tune to finding new approaches that address the deeper inequities of poverty.

FPC: What in your food life at home has changed because of your work with WhyHunger?

NS: As a family, we are more conscious of what we are consuming. I’m always striving to make sure we all eat a well-rounded nutritious diet while not being afraid to splurge. You know there is a change in awareness when you are sitting around the kitchen table talking about high fructose corn syrup as well as who picks the tomatoes at the table. Those things translate into a broader understanding of our broken food system and the role different actors play in it. That sets the stage for change at both a personal level and societal level.

FPC: How does WhyHunger differ from other organizations dedicated to ending hunger? Can you talk about the role that social justice plays in guiding WhyHunger’s work?

NS: WhyHunger is different because we’ve always looked at the root causes of hunger. Social justice is our guiding light and we work at the intersection of hunger with economic inequality, racial inequity, health, and the environment. We are at the forefront of the movement to shift the prevailing model of food charity to food justice rooted in the wisdom and experience of the grassroots. We look to grassroots leaders and those most affected by hunger to guide our work and to ultimately lead the movement we are working to build.

FPC: What is the one food policy change at the local (or state or federal) level that would have the greatest impact on hunger?

NS: At the federal level we need to keep a well-resourced first line of defense against hunger through the Federal Nutrition Programs; however, because so many people who are hungry in America are working, I believe an enhanced Earned Income Tax Credit could make a huge difference to people who are working and struggling to pay the bills and feed their families. Strong legislation on raising the minimum wage is also in order for the same reasons. I also believe that reforming our agriculture policies, especially tackling subsidies so that they are fair and don’t simply go to support big agribusiness, needs to be paramount to fixing our broken food system and creating one that is healthier, more diverse, less concentrated, and better for our environment.

FPC: What do you see as sources for positive change in our food system?

NS: There is a convergence of consumer awareness about food and a populist uprising around economic inequality that has the potential to shape a powerful audience who can support just food policies in America. Organizers, activists, and organizations, like WhyHunger and so many of our grassroots partners, are coming together to form networks and alliances, both regionally and nationally, to support each other and our greater vision for change. I am excited by the power and potential of building a strong, unified movement that works across various sectors and industries to address the underlying issues in our food system and create real change.

FPC: What is the one food issue you would like to see addressed by the presidential candidates/a new presidential administration?

NS: Hunger. It’s the starting point for bigger conversations about social justice. As a country, we need to agree that no person should go hungry. There is something fundamentally wrong in our nation when people are struggling to feed themselves and their families in a land of great abundance.

FPC: What is one problem in our food system that you would like to see solved within this generation?

NS: We need to dismantle the highly concentrated wealth and power of big ag and its negative influence on our health and the degradation of the earth. We need to invest in small and medium scale farms, farmers, farmworkers, and food businesses who are enhancing local and regional food and farm economies and creating access to more nutritious food while not only mitigating the effects of climate change, but also replenishing the land through more sustainable and agroecological farming practices.

FPC: How can individuals make changes at home and in their communities to help end hunger?

NS: Consumers have a tremendous amount of power. Shifting your purchases to support local farmers and healthy food choices can have a big influence. Get involved locally at a community based organization that fulfills your interest while expressing your voice with a national organization or coalition working to create long term change. Use your social media channels, small donations or your voice with local officials to support movements that address the root causes of hunger, like the Fight for $15 or the Fair Food Program of the Coalition of Immokalee Workers.

Grew up in: Oradell, NJ

Your breakfast this morning: Eggs and Toast 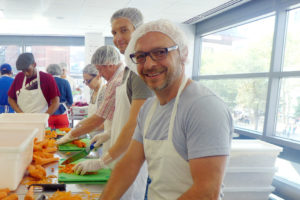 What they do: God's Love We Deliver understands the need for delicious and nutritious meals especially when living with...
Copyright © 2019-20 Hunter College New York City Food Policy Center. All Rights Reserved.
Back to top
Subscribe To Weekly NYC Food Policy Watch Newsletter
Subscribe to our weekly email newsletter today to receive updates on the latest news, reports and event information
We respect your privacy. Your information is safe and will never be shared.