Hunger and Food Insecurity in the LGBT Community 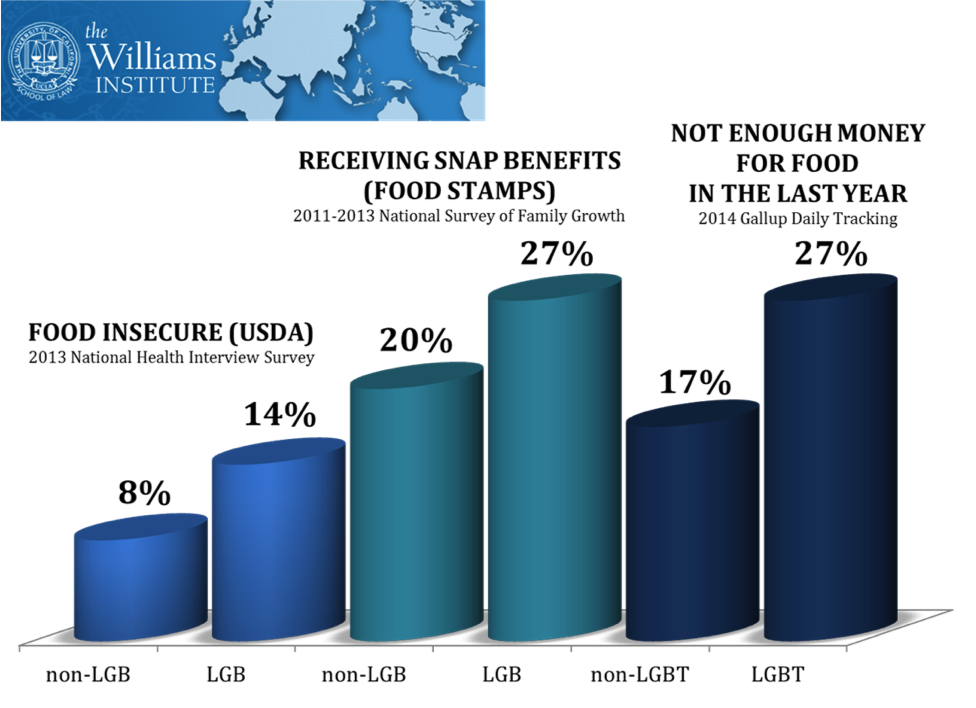 Hunger is a problem in our country. It is a problem that we don’t talk enough about or do enough about, and one of the reasons for this is that hunger isn’t visible enough. A leading think tank on LGBT issues, the Williams Institute at UCLA School of Law, recently added a new layer to our collective understanding of hunger, and the challenge of visibility, in releasing new research about food insecurity in the LGBT community. They found that, counter to popular stereotypes of affluence in the LGBT community, this population struggles with higher rates of food insecurity than the rest of Americans – indeed 27% of LGBT adults experienced a time in the last year when they did not have enough money to feed themselves or their family, as compared to 17% for the non-LGBT population. 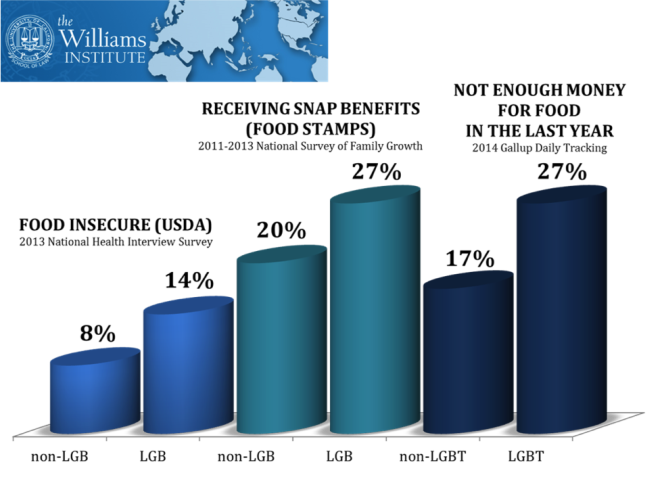 Are these results surprising, or rather to be expected?

The answer to this question was a stepping-off point for a rich conversation at a panel discussion that I moderated on June 4th. The program was convened by the Resnick Program for Food Law and Policy, the Williams Institute, and the NYC Food Policy Center, and featured leaders from both the food policy and LGBT communities. The tone for the conversation was set in introductory remarks by Barbara Turk, New York City’s Food Policy Director, who told the audience that she had initially reacted to the research with something akin to a shrug, as she saw it as confirming what should be a predictable result revealing the consequences of discrimination. Barbara grounded her reaction in the long running struggle for economic justice for LGBT people, a struggle that hasn’t mobilized sufficient response. Many heads in the room were nodding in agreement as Barbara talked about the importance of raising visibility of LGBT needs and challenges – a goal that parallels the work of the anti-hunger community to raise awareness of hunger’s prevalence. Barbara ended her talk with a call for “radical hospitality,” meaning an embrace of all people, and a call for the sharing of food as a kindness rather than a bureaucratic obligation, a theme that took on resonance through the conversation to come.

Next Gary Gates, the lead researcher behind the Williams Institute findings and an internationally cited expert on LGBT demographics, shared the specific results of his work. Gary’s research underscored the depth of the issue, as through each layer of analysis, controlling for a variety of demographic characteristics including race, ethnicity, age, gender and educational attainment, the stark difference between the food situations of LGBT and non-LGBT people remained.

Gathered together to share their reflections on the Williams Institute’s findings were Jan Poppendieck, Professor Emerita at Hunter College and a leading authority on issues of food security and food assistance in the United States, Triada Stampas, Vice President of the Food Bank for New York City, and Elana Redfield of New York City’s Human Resources Administration, which administers SNAP.   Both Jan and Triada were candid about Williams Institute’s research as a wakeup call for leaders in the anti-hunger community, noting that through years of effort to bring more voices of people of color, and of youth, into the anti-hunger conversation, they had never heard of LGBT needs being specifically discussed. Elana also talked about the need for recognition of intersectionality, noting that when people may be marginalized in multiple ways (such as through poverty, race, disability), collaboration is necessary so that policies are developed to address problems holistically.

Triada emphasized the limitations of non-profits in bearing so much of the load in addressing hunger – a major one being the dynamics of fundraising. She talked about how, in the critical struggle to raise funds, NGOs are incentivized to focus on and thus bring increased visibility to the images of hunger that are the most sympathetic to the broadest audience. This often results in a primary focus on childhood hunger. In this construct, Triada explained, the efforts of the nonprofit community to shine a light on one population may have inadvertently contributed to the invisibility of another population: LGBT people. Triada advocated for “rolling out the welcome mat” to all communities.

Jan addressed the Williams Institute’s inclusion of Supplemental Nutrition Assistance Program (SNAP, formerly known as food stamps) participation rates in its data, which reflected higher rates of SNAP participation among those identifying as LGBT. While we often look at SNAP as an indicator of hunger, Jan cautioned against equating it with a measure of food insecurity, as the program is proven to be effective in reducing food insecurity. This was recently confirmed in a USDA study (and, incidentally, SNAP is also proven to reduce the prevalence of poverty nationwide). She also hoped that, in an environment where SNAP is under serious political attack, LGBT people can raise their voices in support of strong food assistance.

Finally, Elana spoke to the role of government in making benefits more accessible, and bringing focus to outreach. Elana is the first person in New York City government to hold the newly created position of Director of LGBTQI Affairs, and in her role she plans to focus especially on training of city staff, to make them more knowledgeable about and accepting of LGBT community needs. She hoped to leave the audience with the sense that government could actually make things better.

What emerged from the event was a consensus toward the need for increased visibility of hunger in all communities, and how movements must be built across advocacy spheres.   This, the voices in the room emphasized, will require more anti-hunger folks reaching out to the LGBT community. It will require LGBT service providers asking their clients about hunger, and LGBT communities thinking about hunger as one of their own issues. It will require government to collect better data on LGBT communities. And it will require that all of us own up to the unacceptable outcomes when we let discrimination, injustice, and inequality persist.

Listen to the panel presentation and discussion at Heritage Radio Network.

We are grateful to O’Melveny & Myers LLP for their sponsorship of this event. 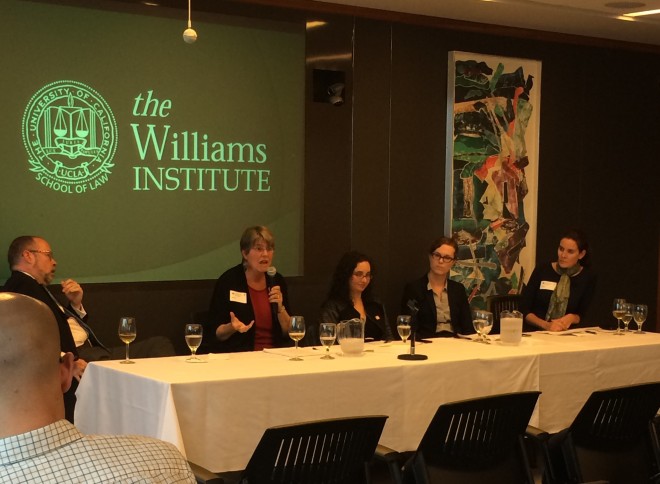 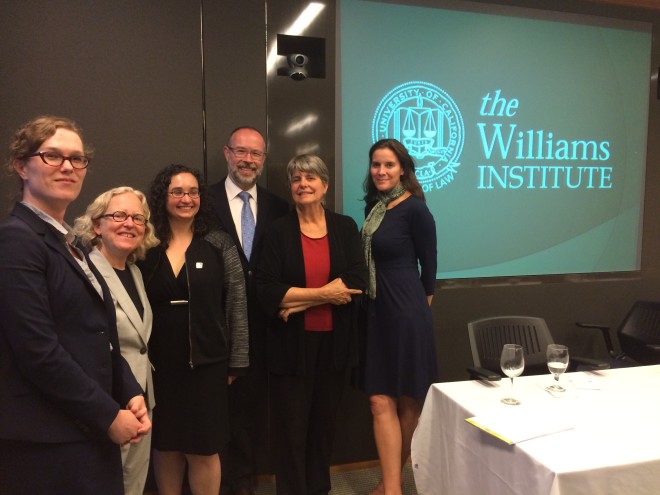 October 29, 2019
Subscribe To Weekly NYC Food Policy Watch Newsletter
Subscribe to our weekly email newsletter today to receive updates on the latest news, reports and event information
We respect your privacy. Your information is safe and will never be shared.