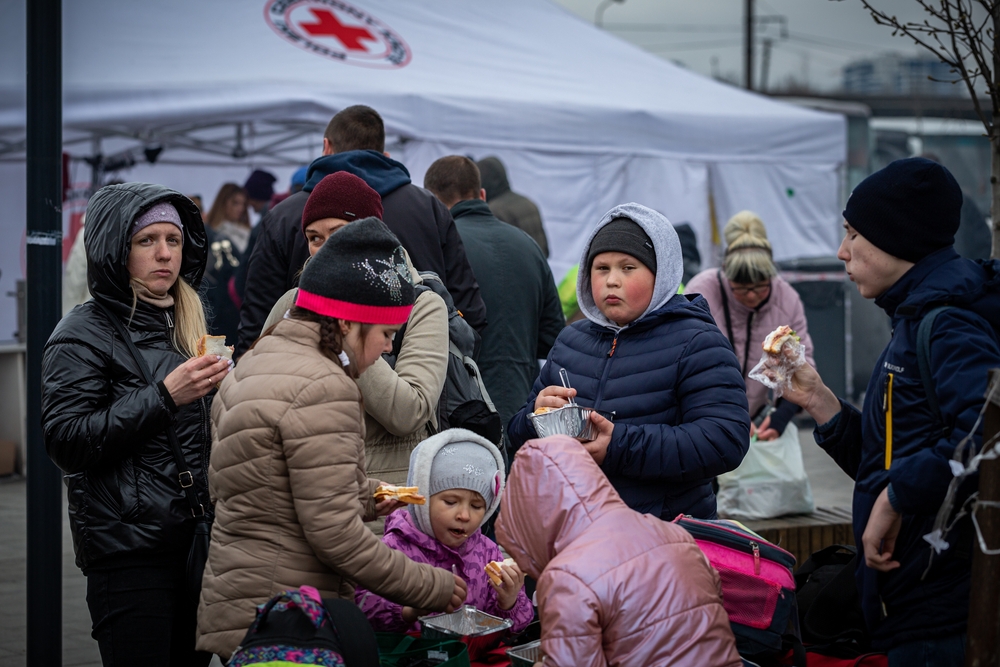 Overview: World Central Kitchen is working with chefs from countries around the world to feed Ukrainians who have fled the country, as well as those who are staying in shelters within Ukraine.

Program goals: To support and feed Ukrainians during the Russia-Ukraine war.

How it works: World Central Kitchen (WCK) provides hot, nutritious meals and grocery kits to Ukrainian refugees, seniors, families and individuals in shelters, those living in newly liberated Ukrainian cities, and those trapped on the front lines of the war. Meals are cooked at local restaurants and at the WCK Relief Kitchen in Premysl, Poland, and brought by truck and train to hundreds of locations, including bomb shelters, churches, train stations, hospitals, and border crossings throughout Ukraine and six bordering countries. Meals are served 24 hours a day at eight Polish border crossings and can be directly to residents who are unable to leave their homes.

WCK chefs have the capacity to cook up to 100,000 meals per day at the Premysl kitchen, using 12 industrial-sized paella pans and 12 large ovens.

WCK has been serving meals to people in crisis around the world since 2010, working with local chefs as well as professional chefs and volunteers from various countries who are willing to donate their time and services to support the cause.

Progress to date: Between February 25 and March 2, WCK and 26 partnering restaurants served more than 41,000 meals. By March 13, more than one million meals had been served at more than 330 distribution sites, a central relief kitchen had been established in Premysl, Poland, multiple warehouses had been set up in Lviv, Ukraine, and there were 24/7 meal-distribution-sites at all eight Polish border crossings. By April 4, WCK was serving almost 300,000 meals per day in 30 cities in Ukraine and across seven countries.

Why it is important: Since the Russia-Ukraine war began, more than ten million Ukrainian citizens have left their homes. These include 4.3 million who have fled the country and 6.5 million who have been displaced within Ukraine.

Those who have crossed the border into neighboring countries, including mothers with small children, often face long, treacherous journeys, walking for several days in freezing temperatures with little or no food, and possibly waiting at the border for up to 72 hours. The warm meals and hot drinks they receive at the border not only help the refugees regain strength, energy, and warmth, but are also a symbol of support and comfort to help them through the crisis.

Inside Ukraine, food security is at risk because of the Russian invasion. Ukrainians who have left their homes to stay at shelters, those fighting on the front lines, and those – such as the elderly and disabled – who have been unable to leave their homes, are all in need of nutritious meals.

WCK and its partnering restaurants, chefs, and volunteers are providing Ukrainians with hot meals and traditional Ukrainian foods to keep them both nourished and comforted.

Program/Policy initiated: WCK began supporting Ukrainian refugees in Poland just one day after the initial attack by Russia on February 24, 2022.

Similar practices: Many chefs across America are fundraising and donating money to WCK. Restaurants and bars in California are now selling special menu items in support of Ukraine, with proceeds going to WCK. On March 16, 70 Chicago-area chefs participated in Chicago Chefs Cook for Ukraine to raise money for WCK. In Atlanta, Asian chefs and entrepreneurs joined together to sell “Stand with Ukraine” food boxes and donated the money to WCK.

Evaluation: See “Progress to date” above.

Nairobi Establishes a Framework from Which Urban...

April 9, 2015
Subscribe To Weekly NYC Food Policy Watch Newsletter
Subscribe to our weekly email newsletter today to receive updates on the latest news, reports and event information
We respect your privacy. Your information is safe and will never be shared.