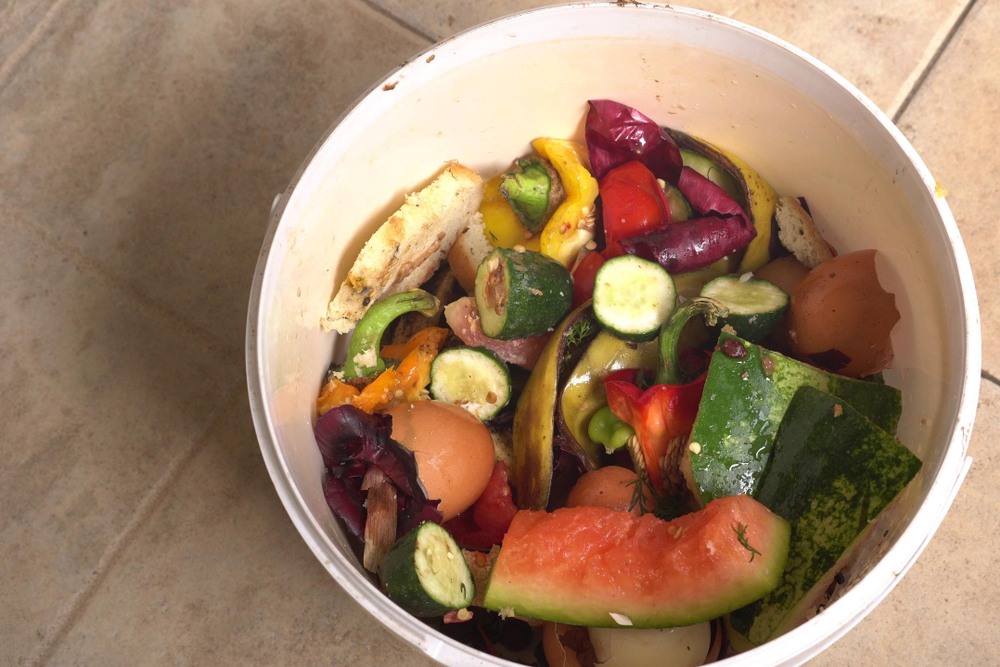 Overview: As of July 1, 2020, food scraps are no longer permitted in Vermont landfills.

Program goals: To reduce waste and greenhouse gas emissions from landfills and to save space in landfills.

How it works: Vermont’s Universal Recycling Law of 2012 banned three categories of materials from trash bins: blue bin recyclables (i.e. containers, cardboard, and paper), leaf and yard debris and clean wood, and food scraps. The food scrap ban was phased in (see below), with the final and most recent phase being a full ban on food scraps in landfills for all Vermont residents.

Vermonters must separate their food scraps from other waste materials. Food scraps include parts of food that are typically not eaten (e.g. peels, seeds, pits, bones, tea bags, coffee grounds and filters, eggshells, grease), as well as plate scraps and leftovers that have gone bad.

The Department of Environmental Conservation (DEC) suggests collecting food scraps in any container, such as a bucket, a large yogurt tub, or a plastic bag kept in the freezer. After separating the food waste, there are several options for how to use or dispose of it:

Food scraps that are not processed or used at home and are brought or hauled to a network of private and public facilities and farms tol be composted, fed to animals, or processed by anaerobic digesters, which facilitate the natural process in which microorganisms break down organic matter coming from plants or animals.

Compliance with this law is not strictly enforced at the individual level; that is, officials are not looking through residential garbage bags to ensure there are no food scraps or recyclables included in the regular trash. DEC officials expect Vermonters to comply voluntarily, particularly since many people choose to live in Vermont because they are environmentalists and are already interested in composting. Research conducted by the University of Vermont in 2018 showed widespread support for the food scraps ban and indicated that one-third of Vermont residents already composted all their food waste, while 72 percent composted at least some.

The Agency of Natural Resources (ANR) has enforcement authority and will respond to complaints and perform outreach efforts with large producers of food waste in the state.

Why it is important: According to Josh Kelly of the DEC, if all food scraps in Vermont’s landfills prior to July 1 were composted, the reduction in greenhouse gas emissions would be equivalent to taking 9,000 cars off the road.

In a landfill, food scraps decompose very slowly and the nutrients cannot be returned to the soil. As a result, methane gas is produced from the rotting food and released into the atmosphere. Methane is a potent greenhouse gas, meaning that it absorbs the sun’s heat and traps it in the air, warming the air and contributing to climate change.

The impact of increasing temperatures and natural disasters as a result of climate change will damage our food systems in many ways. Farmland will not be arable, livestock will not have food to eat and will not prosper, and the nutritional quality of food will be reduced.

Conversely, when food scraps are composted and fed to animals, food production can flourish. Compost provides nutrients for the soil and allows crops to grow, and those crops can feed both animals and humans. Food scraps fed to animals such as pigs and chickens also keep livestock nourished and maintain healthy egg production.

Program/Policy initiated: Food scraps have been banned in Vermont landfills since July 1, 2020.

Similar practices: While Vermont is the first state in the nation to implement a statewide food scrap ban, some large cities, including San Francisco and Seattle, have implemented similar bans at the local level. Other states, including Connecticut and Massachusetts, have banned commercial establishments that generate more than a specified weight of food waste per year from disposing of it in landfills.

Evaluation: One company that collects food scraps in 49 Northeastern Vermont towns noted a marked increase in food scrap bins collected, from 96 in June to 187 in July to 231 in August. Josh Kelly also commented that the use of food scrap drop-off sites doubled or even tripled, depending on the site, in the first month of the ban.

Although the increase in food scrap collections is promising, there is some concern that haulers and composting facilities will not be able to meet the rising demand for their services. DEC estimates, however, that more than nine new food scrap haulers have been established in the past six months. Additionally, the number of food scrap haulers in the state has more than doubled since the Universal Recycling Law passed in 2012; there were approximately 12 food scrap haulers in 2012, and now there are more than 30. A few new composting sites have also been permitted since July 1.

The United Kingdom Plans for a Green...

May 22, 2019
Subscribe To Weekly NYC Food Policy Watch Newsletter
Subscribe to our weekly email newsletter today to receive updates on the latest news, reports and event information
We respect your privacy. Your information is safe and will never be shared.