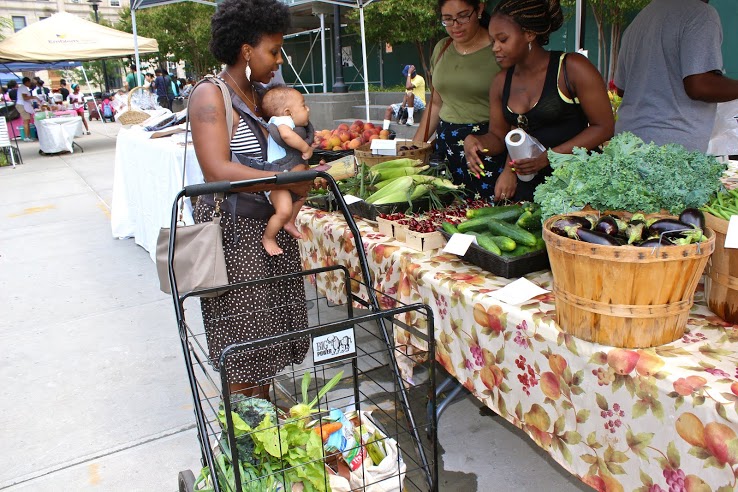 What They Do: The Central Brooklyn Food Cooperative (CBFC) is a 100 percent member-owned-and-operated food store with membership open to all. The effort is Black-led, and was created to help the mostly of color, low to moderate income folks in Central Brooklyn improve local food options. By establishing a permanent community-based and member-run food cooperative, they can make it easy and affordable to buy good food while strengthening ties between neighbors.

How They Do It: In 2013, members of The Brooklyn Movement Center, a community organizing group based in Bedford-Stuyvesant and Crown Heights, and Central Brooklyn residents came together to plan the CBFC. By 2015 the organization had completed its bylaws and was incorporated as an LLC. The coop is currently in its organizing phase and members are currently in the process of searching for a physical location. It runs under a members­-only mode, but anyone,  regardless of where they live, can become a member. Members purchase a share of the coop as a one-time investment fee, and volunteer their time to keep operating costs low. The food prices and selection will be set by members based on their preferences. Typically the co-op will offer organic and vegan options, as well as more conventional mainstream choices. Like other co-ops, CBFC is run democratically, and members vote to elect members of the board, who determine the co-op’s policies.

Mission: To utilize the community’s collective strength to ensure access to affordable and fresh food within the black, low-to-moderate-income communities of Central Brooklyn. A full list of the CBFC’s values can be viewed here.

Latest project/campaign: Working with the Riseboro Community Partnership, the CBFC is conducting outreach events from Grub Parties to happy hours and picnics for the community. They will be launching a crowdfunding campaign in the fall with the aim of gathering enough resources to create a space for members of the community to get together to discuss food issues,  with the added bonus of getting them info about the coop.

Interesting fact about how they are working to positively affect the food system: The CBFC is working to dismantle the barriers to healthy and fresh food. While there has been a proliferation of farmers’ markets and organic food options throughout New York City, not all neighborhoods, particularly those in the Bronx and Brooklyn, have been included. The CBFC strives toward the elimination of social, economic, political, and cultural barriers to accessing healthy and sustainable food in Central Brooklyn. As they state on their website, food cooperatives formed by black Brooklynites have a history that goes back to the early 20th century. Since then, various food justice and community self­-determination activists and movements have organized co-ops, people’s groceries and other community­-owned food collectives. This effort is their part of that history and evolution.

Founder(s): The CBFC was was originally organized by local activists and created by the Brooklyn Movement Center. It is also supported by RiseBoro Community Partnership and other community-based organizations.

Pie in the Sky: Half-Baked Ideas That...

NYC Food by The Numbers: The Hunts...

April 16, 2014
Subscribe To Weekly NYC Food Policy Watch Newsletter
Subscribe to our weekly email newsletter today to receive updates on the latest news, reports and event information
We respect your privacy. Your information is safe and will never be shared.